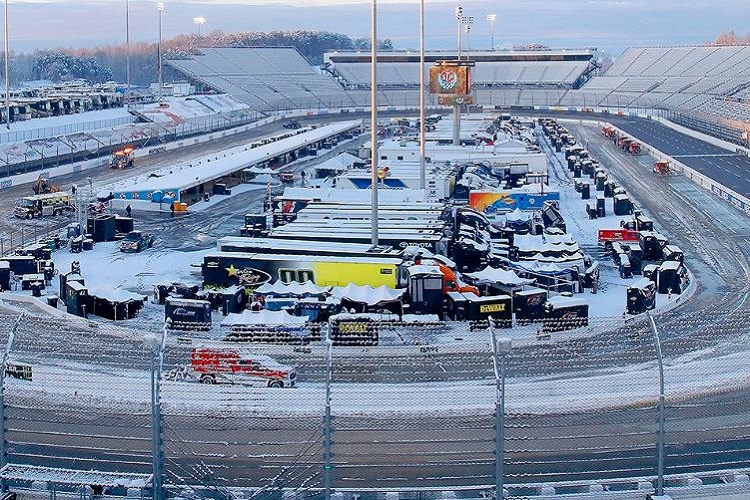 NASCAR fans will have to wait another day to see the Camping World Truck and Monster Energy Cup Series drivers battle it out at Martinsville Speedway.

Due to snowy conditions, the track announced hours before Sunday’s action that both events have been postponed to Monday. Saturday’s Alpha Energy Solutions 250 Truck race had been moved to Sunday before the Cup Series’ STP 500 after 24 laps when snow started falling. With the further delay, the Truck Series event will race on Monday at 11 AM Eastern time, with the Cup race starting three hours later at 2 PM.

“We hate it, nothing we can do about the weather,” track president Clay Campbell stated in a video to fans. “It was the only decision to make for your safety. [The snow]’s spread everywhere, so it will not be safe travelling down here. Our facility is not ready. We worked all through the night trying to keep the track cleaned of snow – did a pretty good job at that. […] But at the end of the day, we lost the battle.”

“Way more snow than anticipated last night-Met with track/local authorities this morning-resources need to be dedicated to local community-roads-trees down, etc,” NASCAR Executive Vice President Steve O’Donnell tweeted. “We’ll put on a great day of [NASCAR] Monday. #doubleheader Always a tough call but the right one in this case.”

The weather forced NASCAR to cancel Cup qualifying and set the starting grid by points. As a result, championship leader Martin Truex Jr. will start on the pole for the third consecutive race. Truex had also dominated Saturday’s two practice sessions, with Brad Keselowski behind him.

In the Truck race, pole-sitter Ben Rhodes led all but one lap (ThorSport Racing team-mate Matt Crafton led the other) and was in first when the caution came out for snow. The yellow flag was eventually changed to a red as snowfall increased.

While a rare occurrence, it is not the first time a NASCAR event has been postponed for snow. In March 1993, Atlanta Motor Speedway‘s Motorcraft Quality Parts 500 was marred by the so-called “Storm of the Century”, a massive blizzard that impacted the Gulf of Mexico and killed over 300 people. Practice and qualifying went as scheduled as Rusty Wallace won the pole, but the storm eventually hit the track as Sunday neared, forcing the race to be moved to the following week. After seven more days of waiting, Morgan Shepherd won his final NASCAR national series race. Interestingly, Shepherd is the only driver in the forty-car field that race who is still racing as the now-76-year-old currently competes in the Xfinity Series.

In 2006, the Busch (now Xfinity) Series’ Food City 250 at Bristol Motor Speedway suffered from the effects of snow after just 32 laps. During the red flag, fans, drivers, and crewmen participated in snowball fights, and one team even built a snowman to pass the time. Kyle Busch eventually won the race. Two years later, Atlanta was once again affected by a snowstorm, prompting Cup practice to be delayed. However, the 2018 STP 500 is the first race since the 1993 Motorcraft Quality Parts 500 to be completely postponed due to snow. 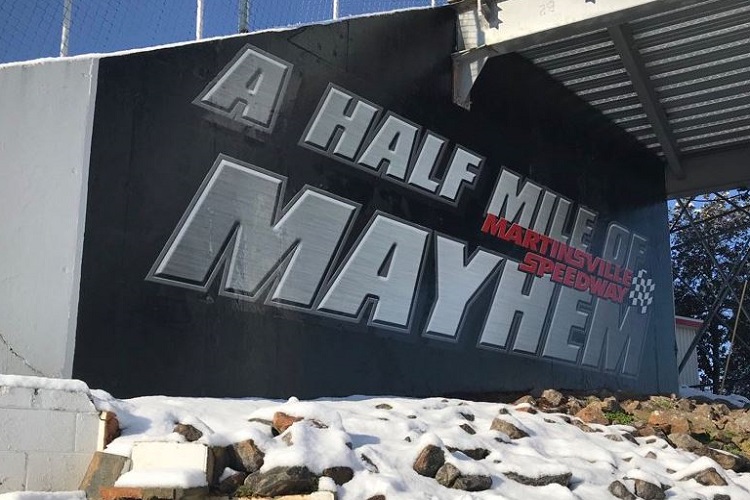 On social media, various NASCAR figures voiced their unhappiness over the postponement and related issues. Jeff Gluck commented on the poor facility conditions and the inability to park as mud plagued the area. Defending ARCA Racing Series champion Austin Theriault added such parking problems would result in injuries and damage as fans’ cars would slide downhill due to the surface.

“Though I do feel bad for those that drove from hours away,” Theriault commented. “Please don’t give up on [NASCAR] because of a freak spring snowstorm. No one can make the BEST decisions for 100% of the people 100% of the time. Lives are more important [than] thrills.”

This is the first time since 2010 that the spring Martinsville race has been moved to Monday. Unlike in 2018, the 2010 race was due to rain, a more common reason for postponement than snow.

By Justin Nguyen
3 Mins read
Chandler Smith needed to win the NASCAR Truck Series’ Round of 10 finale at Bristol to qualify for the next round. Despite Sheldon Creed dominating, Smith escaped a wild five-lap sprint to win his first career Truck race.
NASCAR Cup Series