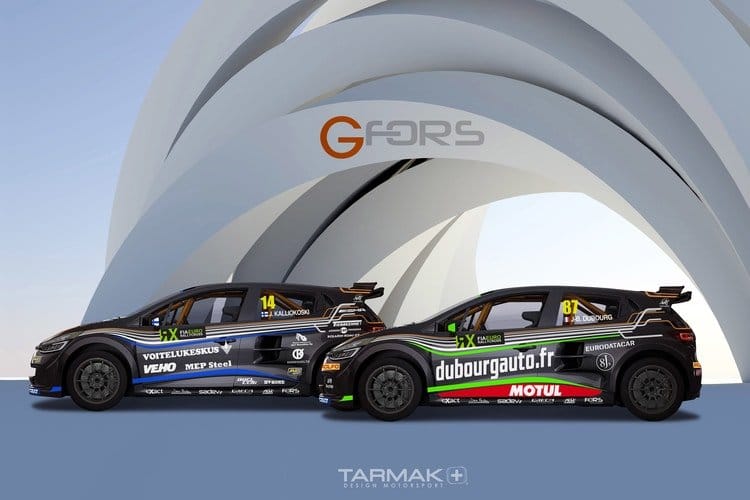 Founded by Guerlain Chicherit and Stephan Orre of FORS Performance, G-FORS are the latest new team to be formed in the ever-expanding world of rallycross.

Despite their relative infancy as a team, G-FORS have a very clear picture in mind of their role within the rallycross hierarchy. From the start, the G-FORS project has been less about seeking ultimate glory, but instead is about providing younger drivers with a fantastic launchpad for success in the future. That said, after some positive testing over pre-season, there is reason to argue that G-FORS’ new Renault Clio could be a very strong package over the course of the 2018 season.

Team Manager, Atte Varsta, reflected the team’s excitement and confidence ahead of the new season, “To create a new team from scratch is always a big challenge. But now approaching the first race everybody in the team can feel the excitement.

“Stéphane and his guys have done a fantastic job in a short period of time and worked long hours. The new car looks great and from the technical perspective, it’s a piece of art.

“We have high expectations for the first race as we have fast drivers with a combination of youth and experience.

“But before the race starts you can’t be sure how competitive the package we have is and what the other teams have done during the winter. For sure we aim high this year!”

The drivers which Varsta made reference to in his comments above are Jean-Baptiste Dubourg (who scored a podium finish in the World Rallycross Championship back in 2015) and the young Finn, Jere Kalliokoski.

With the season-opening round at Barcelona just around the corner, Dubourg outlined his thoughts on what will be a new chapter for his rallycross career, “The off-season is now over and I’m so stoked to be back for the first round of the Euro RX 2018 in Barcelona. New season, new team, new car and new team-mate but always the same target: optimum performance.

“I already feel confident with my new weapon [the Clio IV]; throughout the winter, we have had many test days which have helped me feel more and more comfortable as we improved the settings run after run. The package of this Clio IV is very strong, very reliable and has me really ambitious for this season.

“The working atmosphere is professional with both engineers as well as the mechanics and I’m really happy to share this with Jere, my team mate, who will be also part of the success of this project.

“Barcelona is a track which I like with 2 different sections, the 1st one is a tarmac section where we use the F1 part of the track and the 2nd section, which is the gravel sector, is a bit slippery with a nice jump.

“From experience, I know how important it is for both drivers as a team to score big points in the 1st round, that’s why my goal for Barcelona is to get to the final.”

Kalliokoski was equally positive about his new racing environment, though was also under no illusion about the challenges which he is set to face this year, “I’ve been testing the new Renault Clio R.S. RX a few times now and it feels very impressive! I have a good feeling about the car and it has been a technically reliable race car.

“The team is really professional and they all work hard. The first race is always a bit of a mystery for everyone in terms of competitiveness but my minimum target for Barcelona RX is to get into the final.

“The level of EuroRX is extremely high and everything needs to fall into place in order to succeed in the Championship this year.”