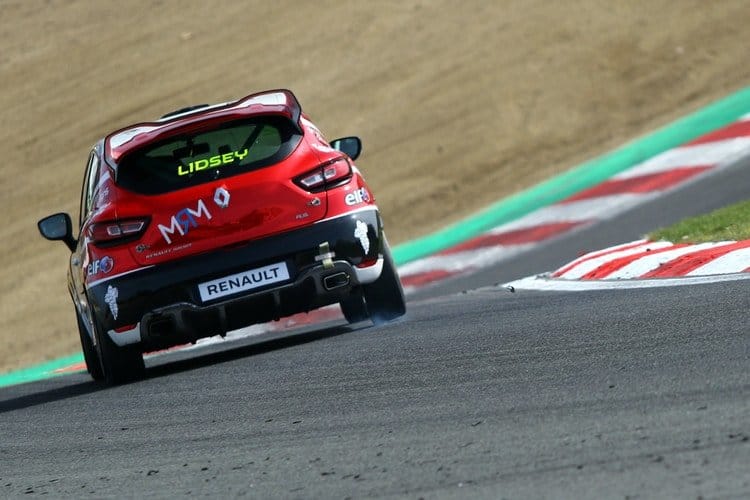 Brett Lidsey and the MRM Racing team will be hoping to show their true form this weekend, as the Renault Clio Cup UK heads into its second round of the 2018 season. At the Brands Hatch curtain-raiser, practice and qualifying indicated some potential for good results in the races that followed.

Unfortunately, those hopes were quickly dashed. As the cars jostled for position on the opening lap of the first race, Zak Fulk lost control of his car temporarily at Druids bend. In trying to regain control, Fulk made contact with Lidsey’s Clio, pitching it into a roll.

With Lidsey’s car on its roof, the MRM Racing team mechanics faced a tough task to get it fixed in time for the following day’s racing. Miraculously, the hard work paid off, and the car managed to make its way onto the starting grid.

The race itself again didn’t go to plan though, it must be said. After having made progress into the top ten at one stage, Lidsey would eventually be classified as fifteenth due to a penalty awarded for exceeding track limits. A race-long battle with understeer due to residual damage didn’t help his cause either.

Heading into the Donington rounds, Lidsey is aiming for consistent finishes in the top ten, but he’ll have to do it in a slightly different set of conditions, however. Due to the damage sustained at Brands Hatch, Lidsey’s original Renault Clio Cup racer will not be making the trip to Donington Park. Instead, while it undergoes structural repairs, the 26 year-old driver will use MRM Racing’s spare Clio.

Despite the early trials and tribulations that he and the team have had to face, Lidsey is remaining positive: “We had really strong pace at Brands, I was happy with how qualifying went but we couldn’t plan for what happened on the first lap of race one – unfortunately that wrecked the weekend.

“Obviously, I was massively disappointed coming away from my home track without the results we wanted, but the high point was the amazing work by the guys at MRM who were first class.”

“To get the car out for race two took a massive effort, everyone worked so hard and although we had some problems with understeer it was important to get some race mileage under our belts. It wasn’t the start to the season we’d planned, but we’re aiming to hit back at the weekend and we’re all feeling positive.”

“I like Donington, it’s a fast and flowing track and I think we’ve got a good chance to do well there and get our season moving in the right direction. We’ll be in the spare car on safety grounds, due to the extra damage Mike found with the shell on mine, so if we can come away with a couple of top 10 finishes, or even better hopefully, I’ll be happy.”

As ever, the second round of the Renault Clio Cup UK will be broadcast live this weekend on iTV 4 as part of the British Touring Car Championship programme.