For the second race of the inaugural TCR UK Series weekend, Stewart Lines and Olli Kangas would line up on the front row of the starting grid. Unlike other race series, TCR UK has a rather unconventional system to determine the starting order for Race 2. The second-best lap times posted by each driver during qualifying are taken, and then the top 10 is reversed, which will hopefully offer more variety in the on-track battles throughout 2018.

Due to an infringement regarding where/when mechanics worked on his car, Darelle Wilson‘s weekend became even more difficult as he was promptly given a grid penalty. Originally set to line up from 4th on the grid, Wilson would now have to start from the very back, alongside Derek Palmer Jnr‘s so-far unreliable Alfa Romeo Giulietta TCR. Having retired from Race 1, this had compounded an unfortunate weekend for Wilson who had shown strong form at times on Saturday.

As the lights went out, Andreas Backman got a tremendous launch in his Volkswagen Golf GTi TCR, slotting between Kangas and Lines to take the race lead as the field headed into Copse corner for the first time. Heading into Brooklands, Lines was then swarmed by three on-rushing cars; Ollie Taylor, Dan Lloyd and Aiden Moffat all finding a way through after making very quick progress up the order.

Dan Lloyd (White Volkswagen, front) was quick to make progress through the field in the early laps. Credit: TCR UK

By the end of lap 1, Lloyd had climbed his way up from 9th on the starting grid to 3rd place – and he was putting Kangas under plenty of pressure. In the DSG Trophy battle, Lines and Swift were now right together in 6th and 7th position respectively. Just behind, Jessica Backman found a way past Finlay Crocker on lap 2 after a bit of argy-bargy on the entry to Woodcote corner.

Heading onto the third lap, Lloyd had already got ahead of Olli Kangas and Aiden Moffat was now trying to follow his rival through on the entry to Copse corner. The duo almost leant on each other, but no contact was made. They did slow each other down, however, and so Ollie Taylor looked to capitalise. Through the middle of the pair of them, Taylor brushed past Kangas and even tried to hang around the outside of Moffat into Woodcote corner. Moffat held his own though, and kept the Team Pyro Honda Civic at bay.

While one Alfa Romeo was charging its way through the field, the other was in strife once again – as had been the theme of the weekend. After spinning out at Brooklands, Derek Palmer Jnr eventually rejoined the track, but was now under threat from being caught by the leaders to go a lap behind. In the midfield, Howard Fuller overtook Carl Swift in order to split up that DSG Trophy battle, and it wasn’t long before Lewis Kent also found his way past Swift.

As the cars moved onto their fifth lap, Dan Lloyd had caught up to the back of his team-mate, Andreas Backman, for the lead of the race. Pulling up alongside on the start-finish straight, Lloyd breezed past Backman on the inside into Copse corner to find himself in 1st place. After his exploits in race 1, being out in front was becoming a bit of a habit for Lloyd, and it didn’t look as though anybody had the answer to challenge the man on-form.

Further back, Darelle Wilson and Jessica Backman had also found a way past Carl Swift, and as they ran into Woodcote corner, the Swede lightly tapped the rear of Wilson’s Vauxhall – as she had done to get past Finlay Crocker earlier in the race. As a result, the bright green Vauxhall Astra TCR, which had already been in the wars during race 1, then began to shed its rear bumper. Nonetheless, Wilson held firm and retained his position, though Lewis Kent was now within touching distance up ahead.

Running side-by-side as they exited Copse corner, Wilson and Kent must’ve been having flashbacks to race 1 when an identical turn of events resulted in contact between the pair, sending Wilson into the gravel trap. Thankfully, history did not repeat itself, and the Vauxhall edged its way past the Hyundai for 8th place as the cars reached the entry to Woodcote. Taking advantage of the fact that Lewis Kent was left out of position, Jessica Backman followed in the footsteps of Wilson and made her way past the Hyundai (which appeared to be struggling with turbo issues again as it had done in the first race.)

Once onto the Wellington straight, Kent’s apparent power deficit left him as a sitting duck for Finlay Crocker, who moved up into 10th place as a result. Even the DSG-equipped Cupra TCR of Carl Swift smelt blood, and overtook Kent’s Hyundai along the start-finish straight.

With just under twenty minutes to go, there was a move for position up at the front. Eager to catch back up to his rival, Dan Lloyd, Aiden Moffat found his way past the second WestCoast Racing car of Andreas Backman. Backman did appear to make it easier than it perhaps should’ve been though, possibly as a result of minimal experience in touring cars. Now, all that stood between Moffat and Lloyd was a 1.6 second time gap.

While one of the Backman siblings was falling back, another was on the up. In the battle for 8th place, Jessica Backman fought her way past Darelle Wilson at Copse corner, while Stewart Lines (who had held on valiantly to 7th place up to this point) was next on the agenda. Indeed, within the space of a lap, Jessica was now latched onto the rear bumper of Lines. Behind, Wilson was now under threat from the tenacious Finlay Crocker. However, Crocker pushed his Civic FK8 TCR a little too hard on the entry to Woodcote, and missed his braking point by a fair distance. He did at least manage to keep the car on the circuit, but a hefty chunk of time had been lost. 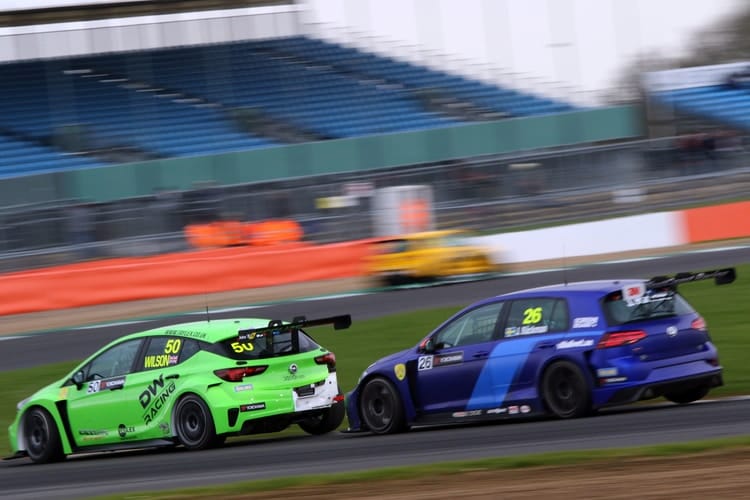 Free from the attention of Crocker, Darelle Wilson was on the attack. Jessica Backman had powered away from Stewart Lines, who had now fallen into the clutches of Wilson. The positions eventually changed hands with eight minutes left on the clock, and soon enough, Crocker was trying to pass Lines too.

Ever since he got ahead of Andreas Backman, Aiden Moffat had spent the race defending from the Swede, unable to make progress towards Lloyd who remained unchallenged up at the front. But with two laps to go, a solid result for the Laser Tools Racing team turned into a disastrous one. Almost simultaneously, Derek Palmer Jnr retired with another mechanical failure, while Moffat ground to a halt on Wellington straight after having run out of fuel. The criminal misjudgment played into the hands of WestCoast Racing, however, who now looked on for a 1-2 finish with Dan Lloyd and Andreas Backman safely ahead of the nearest challenger, Ollie Taylor.

Stewart Lines beat Carl Swift to take the DSG Trophy class win, but the biggest story was at the front of the pack. In the un-liveried, under-funded car, Dan Lloyd took the chequered flag as he won the second race of the day in a similarly dominant fashion to Race 1. Two race wins plus the fastest time in qualifying meant that Lloyd had fully maximised his points tally from the weekend – what a way to announce yourself to potential sponsors. We know that Dan’s intentions are to run a full campaign in the TCR UK Series, and hopefully after these fantastic results, he’ll get the financial backing required to do so. 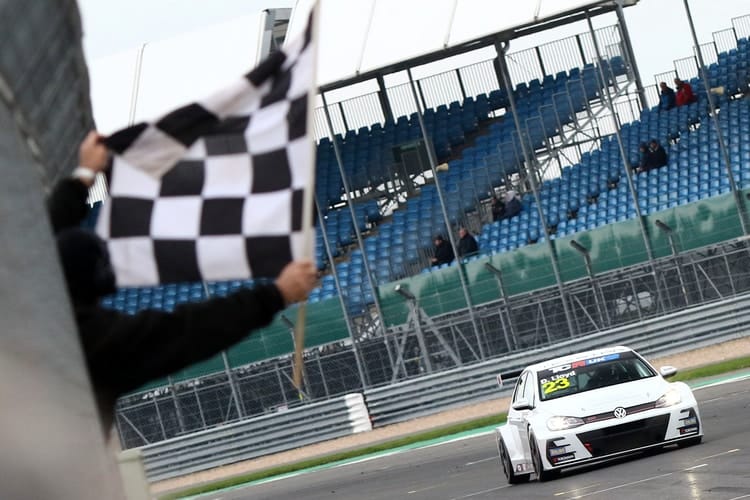 A jubilant Dan Lloyd had this to say after the race: “It was an amazing start, probably one of the best first laps I’ve ever done. Sometimes you just know when you’re on it, and I’ve been like that all weekend. I’ve just had one focus right from the start, I was a hundred per cent confident and knew what I wanted to do and it paid off.”

“I owe a massive thanks to WestCoast Racing; they’ve done an awesome job. This opportunity was a late deal, we’re really pushing to carry on but I’m over the moon with this weekend. I’d also like to say well done to my team-mate Andreas – it’s his first time in the series and he’s done a fantastic job, I’m pleased for him as well.”