In a VW Racing Cup weekend that saw no major driver dominate proceedings, both Toby Davis and Martin Depper made strong inroads to their championship campaign with a win apiece at Rockingham.

Jamie Bond had qualified on pole, but a series of bad luck ensured he could only record a fifth place. The only driver to appear on both podiums was Chris Panayiotou for Maximum Motorsport, with Ethan Hammerton and Dennis Strandberg picking up a podium each.

Setting the pace in the early few minutes was Chris Panayiotou. The Broxbourne racer was the underdog to watch during qualifying, exchanging times with Martin Depper in the opening half. While it wasn’t raining, a soaked track made setting personal best difficult for many drivers.

Jamie Bond soon joined the action on track and with the clock ticking down narrowly took pole position by 0.011 from Depper whose consistent pace made him one to watch during the race. Toby Davis would qualify third as Panayioutou lined-up fourth from championship leader Dennis Strandberg.

The first race was interrupted with a red flag on the opening lap as rookie Ruaridh Clark spun on the banking, hitting the outside wall. (Credit: Nick Smith/TheImageTeam.com)

The opening race started in dramatic circumstances as the cars bunched up into turn 1. Ruaridh Clark was left with nowhere to go and on the banking, lost control hitting the outside wall nose first and bringing out a red flag.

This gave an opportunity to Martin Depper, who made the better start, jumping into the lead before the Deene Hairpin. Polesitter Jamie Bond was determined to regain his pole, but a failed move into Tarzan saw him spin-off, eventually rejoining down the order. He wasn’t the only one though, with Depper missing his breaking point on lap three.

Chris Panyaiotou inherited the lead as a result, but wouldn’t have it all his own way with Toby Davis hounding the Maximum Motorsport driver. The more experience Davis finally made the move work, taking the win by under a second from Panyaiotou and Ethan Hammerton.

Behind them, Taylor took a competitive fourth ahead of Bond who had dropped as low as eighth. Meanwhile Mark Wakefield made the transition to VW’s look easy with a sixth ahead of Silverstone dominator Dennis Strandberg and Tom Walker. 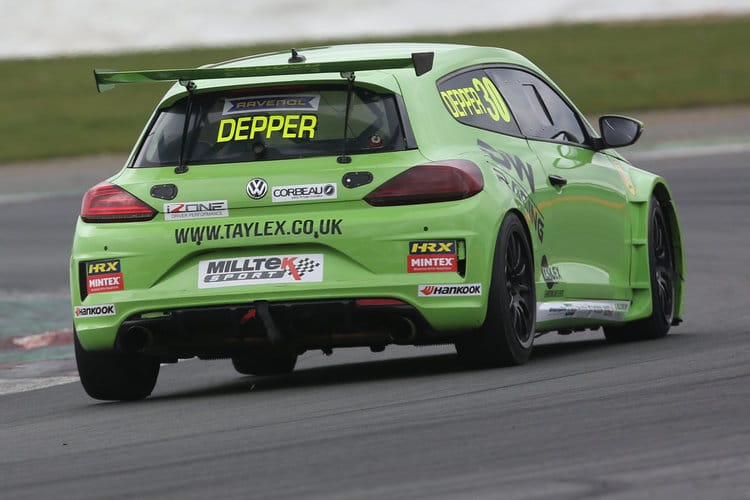 Martin Depper recovered from a poor opening race to break through to the top step (Credit: VW Racing Cup)

From second on the grid it was Jamie Bond who made the strongest start, hoping to make a mends for his disaster in race 1. He led a group of six cars through Deene quickly establishing a gap over Toby Davis and Chris Panayiotou behind.

At the halfway stage, Simon Walton crashed at Gracefield’s, dumping oil on the track as he retired on the inside of the circuit. This caused havoc behind as Bond ran through the gravel, losing the lead. The chasing pack made it through safely, but three others were soon trapped in the run-off, bringing out the red flag.

The race was restarted after a 20 minute delay to clear the stranded Volkswagen’s and the oil from the track.

Davis would lead the field away for the second part of the race, but as they entered the first corner, was tapped by Dennis Strandberg, putting him into a NASCAR-esque spin, recovering at the Deene hairpin. This allowed Martin Depper to take the lead, quickly breaking away as Strandberg jumped to second in front of Mark Wakefield.

Wakefield was spun out on the final lap as Panayiotou took second place ahead of Strandberg. Meanwhile, Davis put in a spectacular recovery to secure fourth from Paul Taylor and Tom Walker.