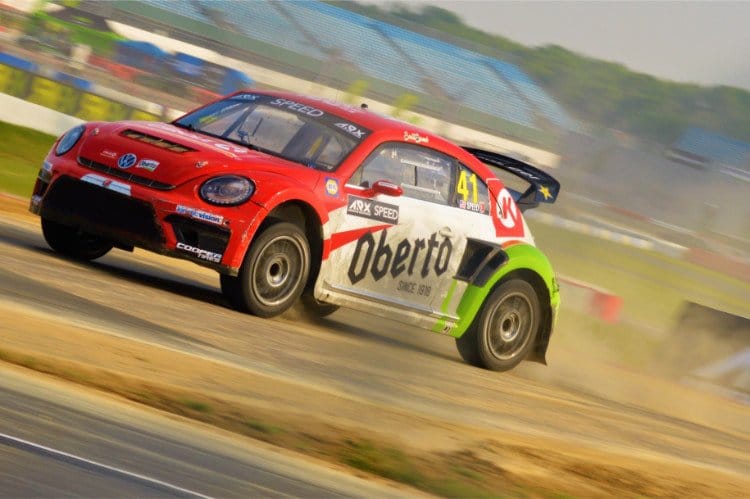 Scott Speed thinks that Volkswagen Andretti Rallycross‘ performance at Silverstone in the Americas Rallycross season opener shows just how good a job the team has done in the US since it first started competing in rallycross events in 2014.

VARX won the last three Global Rallycross titles, and was a championship contender in 2014, but until now it has never been able to be directly compared with Europe’s best on a level playing field.

The SpeedMachine Festival granted such an opportunity, with the World Rallycross championship and newly-formed ARX series both on the bill.

While World RX and ARX rarely raced in the same conditions over the weekend, such was the constant evolution of the track, when the conditions were comparable the Beetles were more than a match for the World RX cars.

On Saturday only Timmy Hansen was faster than Tanner Foust in the other Beetle, while on Sunday morning’s qualifying Speed set the fourth fastest time overall.

“It was an interesting weekend, but the good thing is the cars are real fast,” said Speed. “That says a lot about what we’ve done in the States when we come over here and we had the fourth fastest qualifying of all the cars, total, and we’re carrying 25kgs of extra ballast.”

“It’s validation that Andretti, myself, and Tanner have been doing the right work and we can come here and compete on the same track with the same tyres as those guys,” he added. “Granted, there’s small stuff that’s different with the car but nothing that should be a big performance difference. That was the first thing we were very curious about seeing, how we could stack up with those guys, so that was important; and to check out the new format which is massively different.”

Speed had a difficult weekend, recovering from a poor qualifying draw, then contact in his early heat races that left him on the back foot, but he was able to rescue a podium finish, completing a one-two finish for the VARX squad in the final.

“Obviously, you see the draw for the first qualifier kind of set the tone a little bit for us but ultimately it was us getting destroyed by the Subaru that started our weekend basically having to come from behind,” he said. “From there we had to race real hard and the final was just awesome racing and they were super aggressive behind us and knocked us around a bit but we had a great race with those guys and I was able to fight back to second.”

By Pontus Lindroos
7 Mins read
In our new mini-series ‘The Road To Glory’, The Checkered Flag’s Pontus Lindroos interviews upcoming rallycross talents about their stories and racing career so far. First out is the young American talent Lane Vacala.
Americas Rallycross ChampionshipOff RoadOtherRallycross

By Nigel Chiu
1 Mins read
The ARX journey comes to a close with the championship officially coming to an end.
Americas Rallycross Championship

By Jack Cunnane
1 Mins read
Volkswagen retire the Beetle R from ARX after a five-year stint.