It was a weekend to remember for Geri Nicosia as he repeated his guest appearance from last year, with a win and second place at Thruxton in the Ginetta GT5 Challenge. The results move him up to second in the standings as the 18-year-old was narrowly piped to the line by Max Bird in the second event.

Elsewhere, James Kellett achieved a double podium, with Alex Toth-Jones picking up the remaining third place along with race one pole position ensuring he remains in the championship hunt. Kellett extends his lead at the top to 49 points after just three rounds, due to a poor round for rival Shane Stoney.

In the AM class, Richard Evans keeps the overall lead, but two wins for Adrian Campbell-Smith moves him to within six points of the class lead after seven races so far this season.

It was a strong start to the weekend for Alex Toth-Jones, taking his maiden pole position by almost half a second to Shane Stoney. The Richardson Racing polesitter has had a troubled start to the season, but was on form come Saturday morning, with Stoney the only driver able to get anywhere near him.

Last year, Geri Nicosia made a guest appearance, picking up a podium and win during an intense weekend battle with Jamie Chadwick. This year he was out to improve on that, setting his weekend up for a fine start by qualifying third, narrowly ahead of

A red flag greeted the grid at the start of the opening race, with five cars involved in two first lap collisions. Toth-Jones held the lead for the first half of the restarted event, though both Shane Stoney and Geri Nicosia were not prepared to let him have it all his own way.

The Richardson Racing driver was demoted outside the podium places with James Kellett making it four for the lead. Nicosia and Stoney looked set to continue their form from 2017 until an off from Stoney pushed him back down the order. Nicosia thus repeated his feat from last year, taking the flag and closing in on Kellett in the championship, who finished second ahead of Toth-Jones.

Fourth would go to Connor O’Brien, having worked his way up from ninth as Katie Milner continued her strong run of form with a fifth place ahead of Ashley Marshall. As for Stoney, he could only record eighth behind Max Bird. 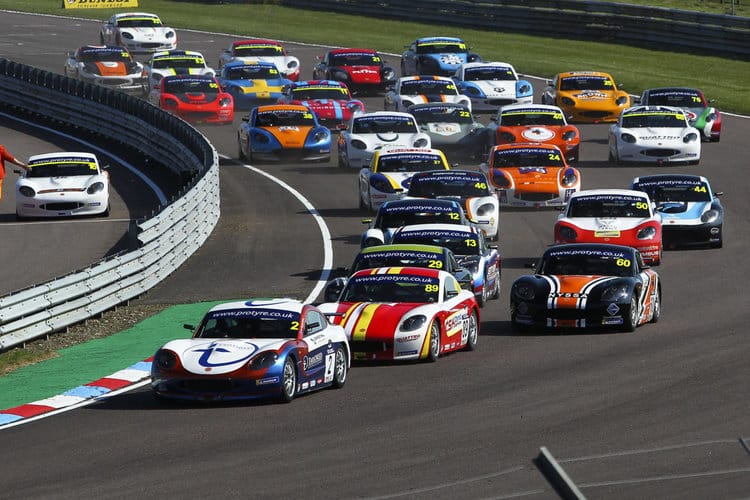 A strong start from polesitter Geri Nicosia was neutralised as a spin from Morgan Quinn in the first corner saw Charlie Martin collide head on with the stricken GT5, bring out the safety car.

Nicosia was not going to have it easy throughout the race, with James Kellett and Alex Toth-Jones making it three cars for the lead. It would be the Richardson Racing driver who made the most spectacular move into first, but after countless overtakes from the opening group, Nicosia finally got his new tyres up to temperature, breaking away with five laps to go, leaving Toth-Jones and Max Bird behind.

There was drama for Nicosia in the final two laps though, losing two seconds and letting Bird through on the penultimate lap, with the pair crossing the line side-by-side. Kellett completed the podium while Toth-Jones dropping to fourth ahead of Will Dyrdal from the back of the grid. Shane Stoney could only record sixth after a miserable weekend ahead of Ashley Marshall and Connor Grady.