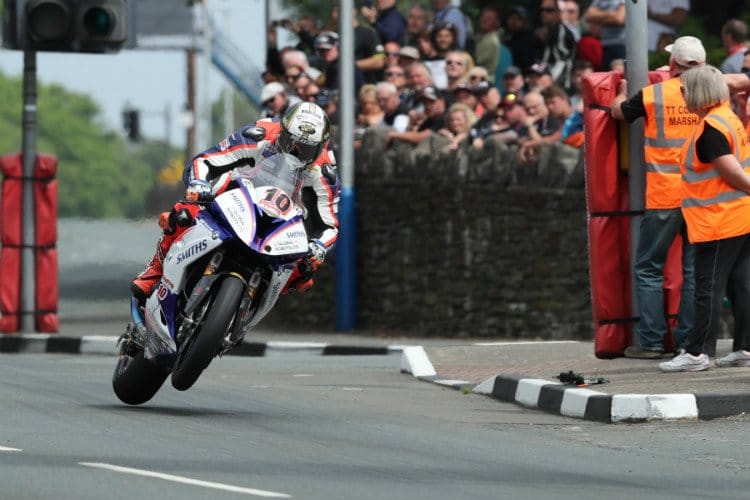 Hickman produced the sensational 135.452mph lap to get the better of Dean Harrison by two seconds. Harrison had led the race for five and a half of the six laps but he was unable to stop Hickman, who turned a 3.7 second deficit at Glen Helen into a lead of 0.8 seconds at the Bungalow.

As well as becoming the quickest man in history at the TT, Hickman also broke the overall race record by 48.064 seconds. Hickman now has two TT victories to his name having won Monday’s Superstock race.

The leading duo were joined on the podium by Conor Cummins on the Padgetts Honda bike. Michael Dunlop, aiming for a fourth victory at this year’s event, was off the pace throughout and had to settle for fourth – almost two minutes behind the leaders.

Josh Brookes secured his best-ever finish at the TT in fifth, ahead of Gary Johnson (sixth), Martin Jessopp (seventh) and Jamie Coward in eighth. Newcomer Davey Todd and Brian McCormack completed the top 10.

Harrison led the early stages, with a 1.2 second lead over Hickman by the time the riders went by Glen Helen for the first time. Dunlop was a further second behind in third, with James Hillier, Cummins and David Johnson completing the top six.

Harrison’s lead increased to 2.4 seconds at Ramsey, but Dunlop had now fallen over eight seconds behind the leading duo. Hillier’s race would come to a premature end as he retired at Westwood.

Dunlop’s challenge was seemingly over by the end of the first lap as he was almost 13 seconds behind Hickman. David Johnson would pull into the pits to retire from the race, allowing Gary Johnson to move up into the top six.

Second time round at Glen Helen, Harrison had a lead of 3.5 seconds whilst Dunlop had been overtaken by Cummins for third. Behind them, leading privateer Sam West had moved up into sixth, whilst Todd was now in eighth on his debut.

As Harrison came in for his first pit stop his lead had been reduced to just 1.4 seconds. Harrison responded immediately as he started the third lap, extending his lead back out to 4.8 seconds. The leading pair were in a league of their own at this stage, with Cummins more than half a minute behind.

The following lap Harrison had stretched his lead over Hickman to 6.9 seconds at Ramsey Hairpin, but the Smiths Racing rider again showed his strength over the Mountain to reduce the deficit at the Bungalow to 4.4 seconds.

Hickman set a new outright lap record of 134.456mph on his way into the second pit stop, with the gap now down to just 1.402 seconds. Despite briefly increasing to 6.2 seconds, the lead was down to 3.6 seconds at the Bungalow, 2.5 seconds at Cronk ny Mona and as Hickman crossed the line to start the final lap, his deficit to Harrison was only 1.9 seconds.

Harrison dominated the first nine miles of the lap to open up a gap of 5.7 seconds at Ballaugh. Hickman stormed down the run to Ramsey to reduce that significantly to just two seconds. He went faster still and by the Bungalow he had the lead of the race for the first time.

Harrison crossed the line first with a new lap record of 134.918mph/ 16:46.742 but this was quickly taken away by the unstoppable Hickman, who recorded a new outright lap record of 135.452mph to take victory by two seconds.

Dunlop’s fourth place was enough for him to pick up the Joey Dunlop TT Championship with 94 points, with Hickman (86) and Harrison (81) taking second and third.

Josh is a Sports Journalism graduate and has been a member of the TCF team since 2015. Between 2015 and 2018, Josh focused primarily on British Superbikes and Road Racing events such as the Isle of Man TT. At the beginning of the 2019 season he became the MotoGP Reporter.