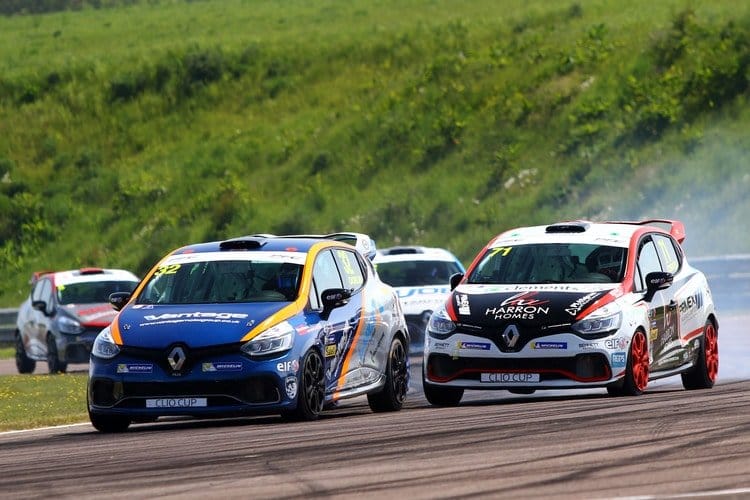 With one of the largest attended events on the calendar. Oulton Park in Cheshire is next for the Renault UK Clio Cup. Plus with the season hotting up to become another closely contested championship, spectators can be guaranteed top race action.

With the Michelin tyres less of an issue at Oulton Park, drivers and Clio Cup fans alike can be relieved that each race will run its full distance.

James Dorlin has been the man to beat the past two weekends with 4 victories in a row. His Westbourne Motorsport Clio will be the target car for all other title challengers. The undoubted aim for Dorlin would be to go for five or even six race wins in a row, if this does happen, James will equal the consecutive win record set by Jonathan Adam in the series.

Four points behind Dorlin in the drivers standings is Team Pyro’s Max Coates. The former leader of the championship following the second weekend will be aiming to regain his championship lead. However, James Dorlin and the man in third, Paul Rivett, will be very tough to beat.

Rivett of WDE Motorsport put the disappointment of Donington Park behind him to score strongly at Thruxton and still remain within just a few points of Dorlin and Coates. The battle between these three drivers this weekend will be the one to keep your eyes on because any twist could mean either someone running away with a lead or tumbling a few places down the order.

Daniel Rowbottom and Jack McCarthy whom are tying on ninety-two points a piece will be aiming to gain their first wins of 2018 and also to close the gap to the three drivers ahead. Rowbottom will be buoyed by the fact he scored two podiums at Oulton Park last year meanwhile McCarthy will be aiming to regain his podium run earlier this season which ended with two sixth places at Thruxton.

Matrix Motorsport driver Michael Epps scored points in all three races last year in the Dunlop MSA British Touring Car Championship, whether this translates to the Clio remains to be seen. However, this will be the best opportunity for Mike to score his first podium finish of the year.

Scoring his only victory of 2017 at Oulton Park was Dorlin’s team-mate James Colburn. He’ll be hoping to finally revisit the top step again this year.

Fresh off the back of her best ever Clio Cup finish of seventh. Jade Edwards of MRM Racing will be the sole representative of the team due to the fact her team-mate Brett Lidsey is getting married. With this strong result already this season, the only way is up for Edwards and a popular podium finish may not be too far away.

Bradley Burns will be aiming to return to the podium following his only visit after the second race at Donington this year whilst Lee Pattison and Zak Fulk will be looking to put Thruxton woes behind them with some good points this weekend.

Qualifying for the Clio Cup takes place on Saturday at 11:00 which is then followed by the first race at 16:00. Sunday hosts the second race of the weekend at 13:30 which will be broadcast on ITV4.

Chambers: “No-one can predict when we can go back racing”

Harper on the verge of title as Ellinas returns, and Carrera Cup...