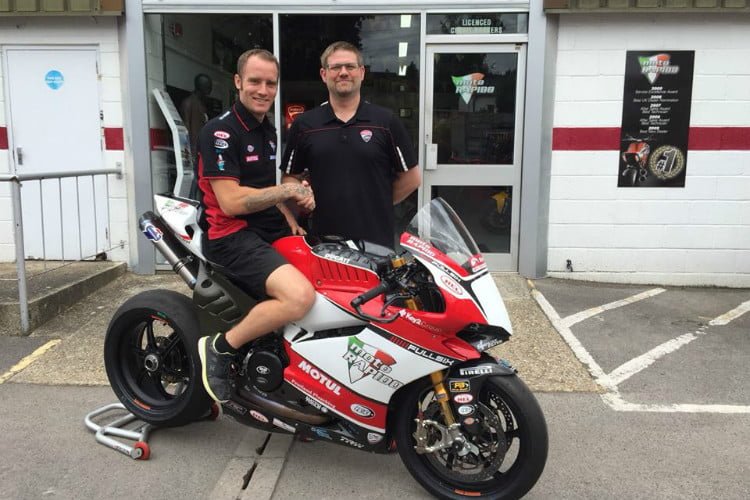 Tommy Bridewell will return to the Bennetts British Superbike Championship at Brands Hatch after signing a last-minute deal with the Moto Rapido Ducati team.

Bridewell will make his first-ever appearance on Ducati machinery this weekend, following his departure from the Movuno.com Halsall Racing Suzuki squad halfway through the Snetterton meeting last month.

The seat at Moto Rapdio became available following the departure of Taylor Mackenzie from the team. Mackenzie has since returned to the Pirelli National Superstock 1000 series and the Bathams BMW outfit.

Bridewell, who has also secured a Suzuka 8-Hour spot with the works-supported S-Pulse Dream Racing team, is now looking forward to a brand-new challenge. He said:

“I am happy to be back racing this weekend, especially at Brands Hatch. Ducati is the only manufacturer I haven’t raced with so this will be a completely new venture and experience for me. Yes we are starting straight off with free practice but it doesn’t worry me at all, I am feeling optimistic and hopefully I can click straight away with the Ducati and can be competitive from the outset.

“From the research I have done, the Ducati seems to have similar characteristics to the Yamaha I used to race and that still is one of the best bikes I have ever raced in BSB, so I am hoping that we can just get stuck in with free practice and build from there. It’s going to be an interesting weekend for us that’s for sure!”

Team boss Steve Moore is aware of the huge challenge that awaits his new rider this weekend, but is also delighted to have picked up an experienced racer in Bridewell. Moore commented:

“It’s been a busy 10 days since Knockhill but we met with Tommy and worked out a deal. It was the obvious choice for good reason; riders like Tommy don’t get left on the shelf for long so I’m happy to have secured him.

“Now we have a massive challenge ahead at Brands Hatch this weekend. As no testing is possible, the sensible and maybe smart thing to do would be to miss this round and start a proper test program – even just a few days testing to sort the basics.  But instead we have decided to go racing against established riders and teams with thousands of miles under their belts and well set up bikes, but where better to test than at a live race weekend?

“Thanks to our sponsors and my team who have made this all happen. Tommy has never ridden a Ducati or twin cylinder Superbike so we have a busy few first sessions. I can’t wait to see what happens.”