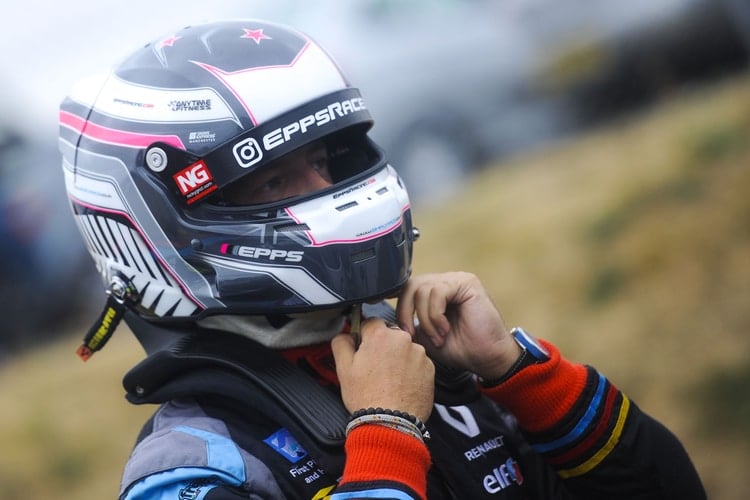 The Hemel Hempstead driver suffered damage in qualifying and had to make do with a lowly thirteenth place spot on the grid for race one and a slightly better position of ninth for race two.

But, it was race one where Mike made his podium breakthrough.

Race one was incredibly wet and the rain skills of the twenty-six year old came to the fore as a battle with stand-in team-mate Ash Hand and Team Pyro’s Bradley Burns at the front of the field was reward for making his way through the field with no incident.

As Daniel Rowbottom won his maiden Clio Cup race, Ash Hand managed to get past Burns for second place and Mike crossed the line in fourth. However, Hand was deemed to have been too robust in a move earlier in the race and was demoted down the order giving Mike both his and the team’s first podium finish in the series.

The second race sadly didn’t replicate the podium heroics of the first. Contact at the start pressed the rear bodywork onto the left rear tyre which caused handling and speed issues for the whole of the nine lap encounter. Two points was his reward in damage limitation.

“I’m over the moon about our first podium and our wet pace was great”, commented Epps after the weekend.

“But it’s bitter-sweet because I’ve had such a mixture of good and bad sessions this weekend, they kind of balance each other out and we could’ve pushed for a similar result in race two were it not spoiled at the start.

“I’m happy with the race one result, credit to everyone at Matrix, and the focus is now to go and get much more out of Rockingham.”