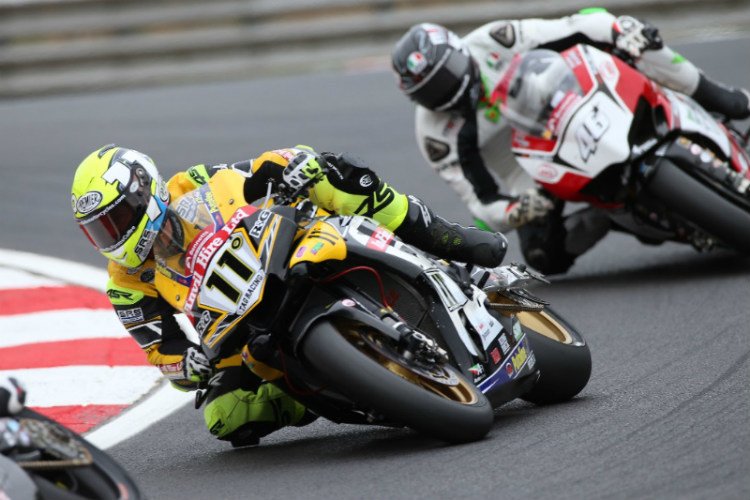 It was a difficult weekend for James Ellison at Brands Hatch (Credit: Bonnie Lane)

James Ellison had a tough weekend at Brands Hatch after crashing out of qualifying and the opening race of the day, before battling through to ninth in race two.

The race meeting had started positively for Ellison and the Anvil Hire TAG Racing team, with encouraging lap-times in free practice. Qualifying would be a disaster though as Ellison crashed at Graham Hill Bend on his first flying lap of Q2. Speaking about the crash, Ellison explained:

“We we’re struggling with the softer front tyre on corner entry, so I made the call in qualifying to run the SC2 front. I went out in Q1 and got through, Q2 I went for a build-up lap, I didn’t really feel like I was pushing, and I crashed as soon as I put angle to the bike. That was the downward slope to our weekend.

Saturday’s crash meant that Ellison had to start race one from 18th on the grid. Ellison made a great start and moved up into 12th by lap four, with his sights firmly set on the top 10.

Moments later though he was forced to pull into the pits with brake issues. The team did manage to fix the problem, leaving Ellison to go back out onto the circuit to set a lap-time which would improve his starting position for the second race.

Ellison started race two from 12th and made up one position on the opening lap. He continued to battle through the field and found himself inside the top 10 by the halfway stage, in ninth spot. He battled with Tommy Bridewell and Danny Buchan for the remaining laps, but was unable to find a way past.

Looking back over race two, Ellison admitted that he is still struggling with the front end of the bike. He said:

“Race two starting from 12th put us in a good position and we had a really, really good fight but you have to qualify well in BSB. I’m still lacking a few things with front end feel and we have some new things to try engine wise, which we will have for Thruxton, we just need to move the power around to have more mid-range power. I can’t thank the team enough we have a great bike, I’m just disappointed that I couldn’t deliver the points they deserve.”

The difficult weekend leaves Ellison 13th in the championship standings, 13 points off the top 10 riders. The next round in the 2018 Bennetts British Superbike Championship takes place at Thruxton in two week’s time.