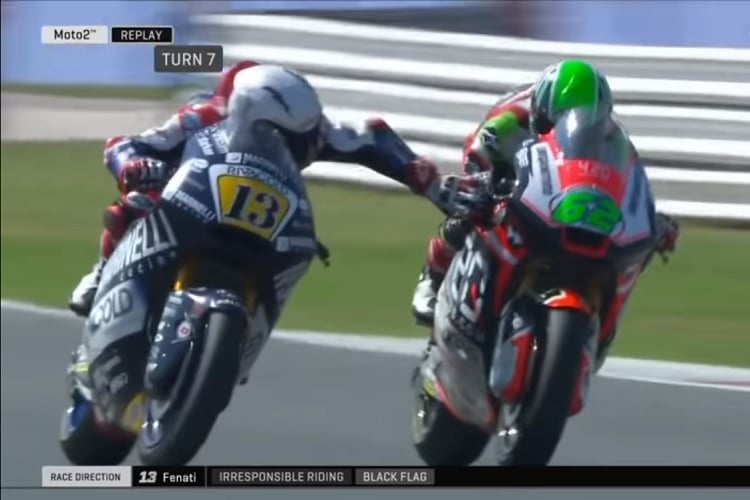 The moment which shocked the racing world (Credit: MotoGP.com)

Romano Fenati’s Grand Prix career is in tatters after a moment of madness in Sunday’s San Marino Grand Prix at Misano. The Italian was disqualified after an extraordinary altercation with Stefano Manzi with his actions leading to a two-race suspension and termination of his contracts for both this and next season. The drama totally overshadowed another supreme victory for championship leader Francesco Bagnaia.

Fenati had been battling with compatriot Stefano Manzi on track when his temper seemingly boiled over. Having apparently been involved in a collision moments earlier, Fenati took matters into his own hands on the back straight towards Quercia, reaching over towards Manzi’s Suter and grabbing the brake lever at 130mph. Only the quick reactions of Manzi prevented a dreadful accident but Romano was immediately black-flagged for irresponsible riding.

Fenati was also levelled with a two-race ban for the incident, with Manzi handed a six-place grid penalty for Aragon for his role in the initial incident, but there were varying opinions throughout the paddock as to the scale of Fenati’s punishment. Marinelli Rivacold Snipers acted immediately by sacking the Italian while Manzi’s Forward Racing team, the squad who ironically had signed Fenati for 2019 as part of their collaboration with MV Agusta, ripped up his contract for next season stating Fenati’s behaviour was “incompatible with the sporting values of Forward Racing and MV Agusta.”

In an official statement on his website, Fenati apologised for his “disgraceful gesture” on Monday, saying “I wish it had just been a bad dream”, but his actions have been universally condemned, leaving his chances of securing a Grand Prix ride in future looking remote.

Elsewhere in the race, Bagnaia took a dominant victory ahead of title rival Miguel Oliveira with Marcel Schrotter taking his maiden Grand Prix podium in third. Joan Mir lost fourth to Mattia Pasini after a late track-limits penalty while Lorenzo Baldassarri rounded out the top six.

Andrea Migno takes Pole at the final round of the season

Binder wins a thriller at Aragon ahead of a charging Navarro