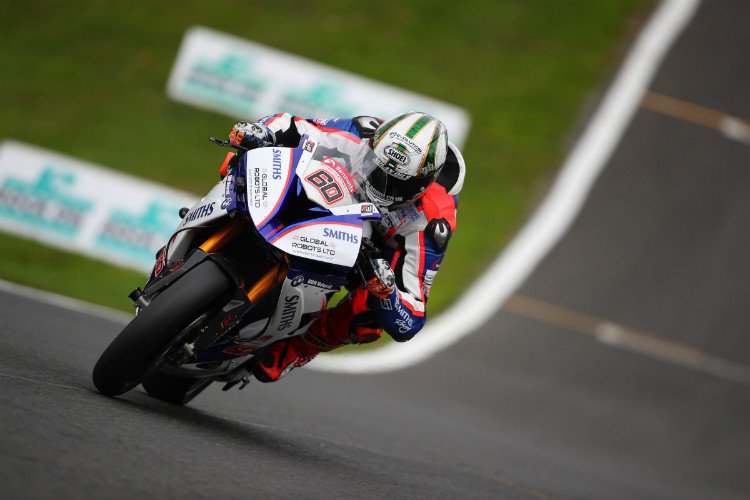 Peter Hickman managed to secure some solid points in the showdown opener at Oulton Park, despite suffering from electrical problems throughout the weekend.

The Smiths Racing BMW rider claimed a brace of eighth place finishes in the damp conditions but was left feeling frustrated with qualifying and the aforementioned electrical issues.

Hickman began the opening race, which was reduced to 16 laps due to the wet weather, from 12th on the grid and had moved up into 10th before the end of the opening lap. Briefly pushed back to 11th, Hickman moved back up to 10th on lap six and although further progress was difficult, by the 10th lap he had climbed into eighth place – where he would finish.

Looking back over race one, Hickman commented:

“It’s been a tough weekend where we’ve been plagued by some sort of electrical problem all three days. We could improve it and make the bike better, but we couldn’t cure it and with Oulton Park being a difficult circuit at the best of times, the issue has made it even more so.

“On the positive side of things, we found a good wet setting which allowed me to compete and although eighth in the first race wasn’t the best of results, it was a good one for me in the wet after the struggles we’ve had.”

The 31-year-old would line up 10th on the grid for race two, however he would fall back down to 16th inside the opening two laps due to the tricky conditions. The circuit now had a hint of a dry line, but it was very easy to be pushed out  wide onto the damp patches.

Hickman was able to fight his way up into the top 10 by lap 10, and two more overtakes in the closing stages saw him take his second successive eighth place. Speaking about race two, Hickman admitted that he had been bullied onto the damp in the opening laps. He said:

“In the second race, I got bullied a bit in the first couple of laps and got pushed onto the damp stuff but by the middle of the race my pace was as good as anyone’s. We have the potential to be at the front, without doubt, but qualifying is still an issue and the additional electronic issue that has plagued us all weekend has hindered us even further.

“The team have been mega, like always, and have turned the bike upside down and inside out, changing practically everything so a massive thanks to them.”

Hickman’s results at Oulton Park leave him sixth in the championship standings, just four points behind his nearest rival Bradley Ray – and only a further six points behind Glenn Irwin (fourth) and Josh Brookes (third).

Smiths Racing team co-ordinator, Darren Jones, admitted that the team need to address the problems with the bike if they are to compete in the showdown. He said:

“Like Peter says, we had a problem with his bike all weekend and the boys have thrown everything at it, having late nights and early starts. We eventually got Peter a bike he could contend with although there was still a slight issue with it on deceleration.

“Two eighth place finishes are ok, but we need better in order to compete in the Showdown, so we’ll try and get a test in before Assen in order to cure the niggling issues and get ourselves further up the results sheets.”

Round 11 of the 2018 Bennetts British Superbike Championship takes place at the iconic Assen circuit in two weeks time.