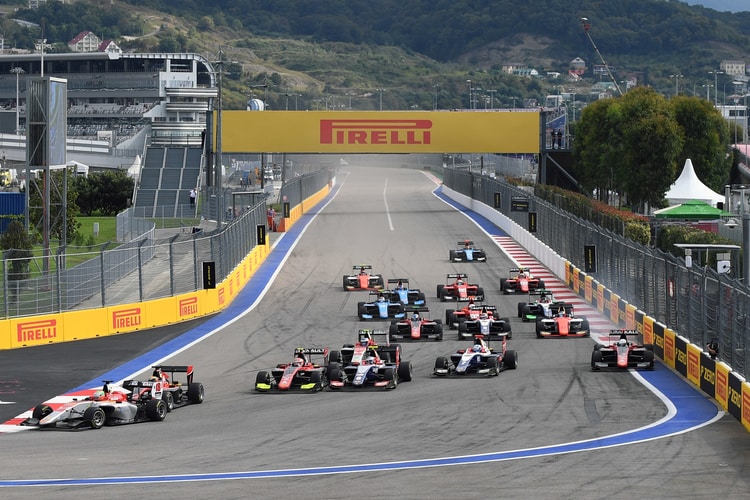 The penultimate round of the 2018 GP3 Series took place at Sochi.

It was the first time the Russian track had featured on the calendar since 2015, meaning it was a new challenge for the grid.

Home-favourite Nikita Mazepin would have been hoping to put in a strong performance to close down Anthoine Hubert in the championship.

The Italian had inherited pole position after Mazepin was penalised for breach of track limits and subsequently had his lap deleted.

Pulcini was able to cruise to victory, avoiding the incidents behind to win by almost four seconds from Mazepin.

Most of the work was done of the opening lap, when the Campos Racing driver was able to pull out a gap over ART Grand Prix‘s Callum Ilott.

In Sunday’s race the Italian came home in eighth place, and is fourth in the championship standings.

Continuing his fine form in the series, David Beckmann claimed his third win of the year.

The German started the race in fourth place, but quickly found himself running in third after passing front-row starter Jake Hughes.

On the following lap, Simo Laaksonen took to the escape area which allowed Beckmann – and Richard Verschoor – through.

A late virtual safety car, gave Beckmann the opportunity he needed and when racing restarted on the final lap he used his DRS to pass the Australian into Turn 13 to snatch victory.

Ilott out of championship contention

A disastrous weekend for Ilott means the Briton drops out of championship contention.

Having started on the front row for the Feature Race, the ART-man would have been hopeful of strong points but found himself tumbling down the field instead and ultimately finished in thirteenth.

Sunday’s race was not much better for him where he finished a lap down on the race winner Beckmann.

Ilott is now 52 points behind Hubert in the championship with 48 available.

Mazepin is 32 points adrift of Hubert meaning it is the Frenchman’s to lose.