The crackle of excitement surrounding the 2019 Dakar Rally just got a whole lot louder. The new X-raid MINI JCW Team will be taking their place on the starting grid in Peru with a line-up of exceptional driving talent.

Former Team Peugeot Total drivers Carlos Sainz, Cyril Despres and Stéphane Peterhansel, boast a staggering 20 Dakar victories between them. The trio will each be racing a MINI John Cooper Works Buggy at next January’s Dakar in South America.

As reigning champion of the Dakar, there’s a weight of expectation that comes with Carlos Sainz’s return to racing. The two-time Dakar champion and two-time WRC title winner is confident MINI has provided him with a package to compete for victory in Peru. Sainz is joined by fellow Spaniard Lucas Cruz, the co-driver who has plotted the route for both of his Dakar wins.

“Stepping into a new car always brings with it new challenges. We’re happy with the hard work we’ve been doing with X-raid, and we’re ready to fight for good results,” said Sainz.

Joining his team-mates for this new adventure is Frenchman Cyril Despres. Since leaving behind a glittering bike racing career which delivered five Dakar wins, Despres moved into the car category in 2015.

There has been success already on four wheels with two wins at the Silk Way Rally. Now Despres is aiming to top his best Dakar car result of third overall, secured in 2017. Despres will have his compatriot Jean-Paul Cottret alongside him, the co-driver that worked with Peterhansel for 17 years and seven wins.

Despres told us, “It’s a huge benefit to be in this new MINI team with Stéphane and Carlos, every day there are lessons these guys can teach you.”

As if six Dakar bike victories were not enough, the French racer has so far collected a further seven car wins at the rally.

“This next Dakar will be special for me because I’m back with X-raid. Before, when I drove a MINI at the Dakar, we won the rally in 2012 and 2013,” said an excited Peterhansel 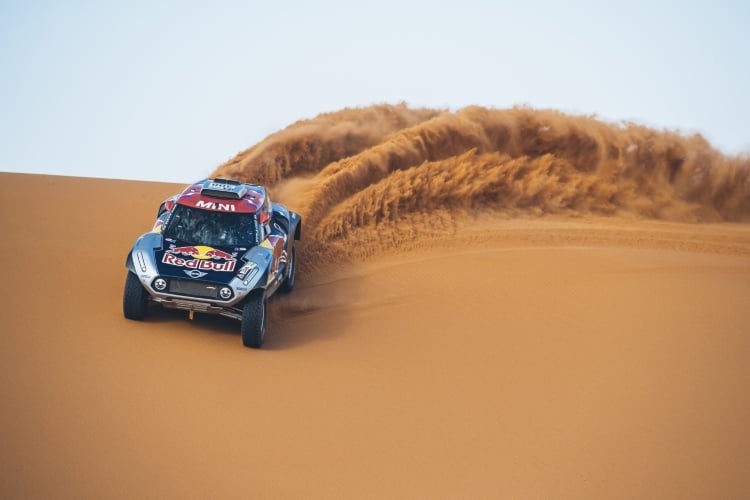 The rear-wheel-drive MINI John Cooper Works Buggy, with a top speed of 190kph, has been tested throughout the year by X-raid’s seasoned mechanics and engineers. Now the keys will be handed over to a dream team of drivers aiming to conquer the most extreme motorsports event on the planet.

Later this week, the offroad machine will be put through its paces by Sainz and Despres at the six-stage Rallye du Maroc. The dunes of Morocco are the ideal place to give the buggy a full-speed run out before tackling the deserts of Peru early next year.

With nearly 2,000 kilometres to be covered over six days, Rallye du Maroc will be an invaluable learning experience for the team.

Peterhansel will not be racing with the X-raid MINI JCW Team in Morocco, but he’ll be revving up his own MINI John Cooper Works Buggy in South America when the Dakar comes to visit next January.

Thomas Kongshoj to become first Danish rider at Dakar since 2011

By Justin Nguyen
2 Mins read
Having been accepted for his début in the legendary rally raid, Thomas Kongshøj will be the first Dane to compete in the Dakar Rally’s Bike category since Jes Munk in 2011.
Dakar

By Justin Nguyen
6 Mins read
2023 Dakar Rally acceptance letters are flowing in for bikers, and those assured a spot in the race include débutants like Tomás de Gavardo and Ace Nilson.
Dakar

By Justin Nguyen
6 Mins read
With Russian/Belarusian teams’ 2023 Dakar Rally fates unknown, KAMAZ-master will still proceed with their programme as if it was on the schedule. MAZ-SPORTauto is more skeptical after being blocked from the 2022 race due to sanctions.