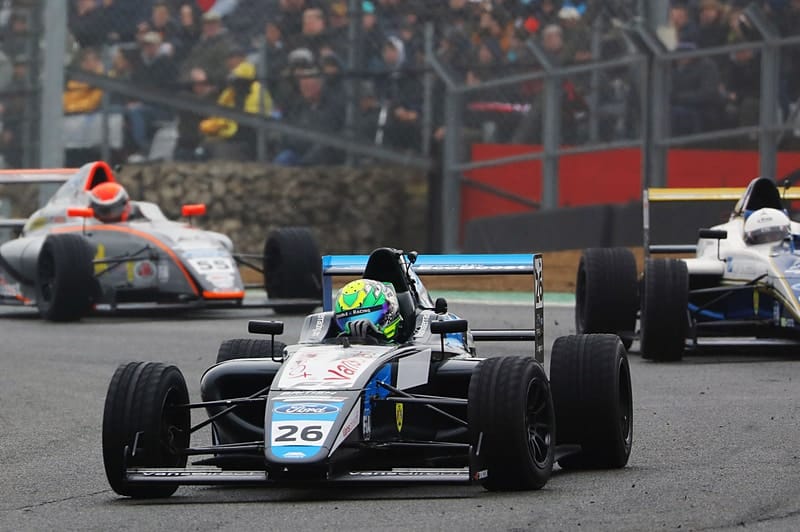 Louis Foster converted his dominant pole position in to victory at race one of the Donington Park round of the 2019 F4 British Championship certified by FIA – powered by Ford EcoBoost season, whilst Luke Browning was forced to sit out the race due to a technical issue.

It wasn’t plain-sailing for Foster though as a shaky start meant the Double R Racing driver lost ground and dropped down to fourth place with Josh Skelton emerging from fifth place to take the initial race lead. Carlin‘s Zane Maloney attacked Sebastian Alvarez for second place but the pair made contact with Alvarez spinning and winding up in last place, promoting Foster back up to second.

Foster stuck with Skelton though and stayed within a second of the JHR Developments machine before retaking the lead 11 laps later. They finished the race less than one second apart but a clear 14 seconds ahead of the rest of the field.

Bart Horsten kept his car out of the trouble being caused around him to take third place for Arden Motorsport after starting eighth on the grid.

Joe Turney came home in fourth place despite making contact with his Carlin team-mate Maloney and Arden’s Tommy Foster whilst British F4 debutant Alex Connor held on to his fifth place grid spot to convert that to a top five finish at race end.

Fortec‘s Roberto Faria takes applause for the standout performance of the race as he climbed up to sixth place after starting eleventh, putting in a solid performance.

The second JHR machine of Carter Williams claimed seventh place after starting tenth, despite a spin on the opening lap whilst Maloney recovered to eighth place after dropping to twelfth following his contact with Turney.

Alvarez struggled to climb back through the field after his disastrous first lap so was forced to settle for ninth place.

Tommy Foster was also left with no choice but to rue what might have been as he crossed the line in tenth place after his collision with Turney left him at the back of the field.

Mario Martinez endured a quiet race down in eleventh following his difficult qualifying earlier in the day as did Reema Juffali, who closed the race off in twelfth place.

As mentioned, Browning was unable to take the race start owing to a technical issue with his Richardson Racing car.

The result means Louis Foster takes a seven-point championship advantage over Alvarez into race two which takes place on Sunday morning at 10:45.