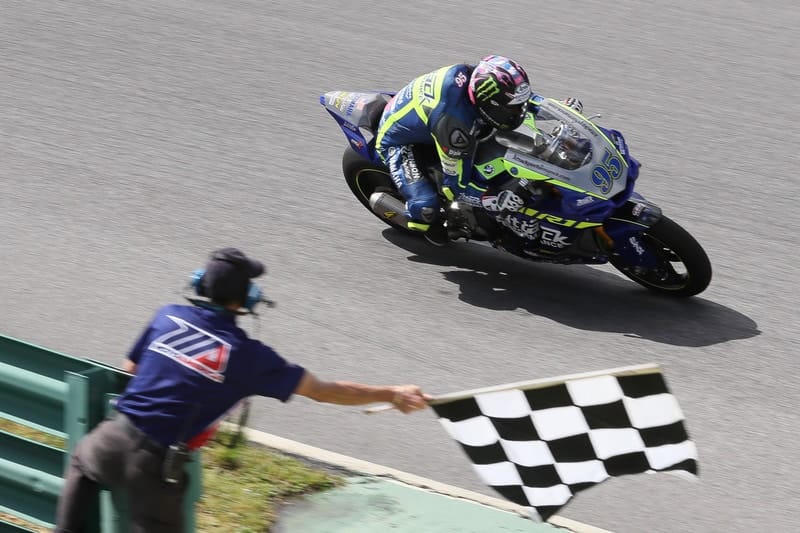 JD Beachm, who finished fourth in race one, delivered an outstanding performance in dry conditions, as he dominated proceedings in race two. He finished ahead of Garrett Gerloff and Suzuki’s Toni Elias who crossed the line in second and third respectively.

With the track drying out after earlier, heavy rainfall, tyre choices were crucial for the riders. Kyle Wyman of the V4 Ducati Panigale team was the only rider to choose the wets. It seemed to pay off as he quickly went from tenth to first in a matter of corners.

However, by the end of lap three the track was already very dry. This allowed Beach and Gerloff to rapidly breached the gap to Wyman. They made light work of the Ducati, who was now dropping down the order.

Meanwhile, the fight for victory between the two Yamaha riders was intensifying. As they swapped the lead on several occasions, but with ten laps to go Beach started to pull away from Gerloff as he set a blistering pace at the front.

As the conditions kept improving, Beach was getting quicker and quicker. He eventually led by +3.759 as he came across the line to celebrate a stunning victory at the Virginia International Raceway.

The battle for third was a four-way battle which continued into the final lap. Elias, Mathew Scholtz, Jake Lewis and Cameron Peterson were all within two seconds of each other. It was Scholtz who held third place as they started the last lap, but Elias displayed his experience to pip the 26-year-old over the line. Peterson made a last gasp move past Lewis into fifth, whilst Josh Herrin rounded out the top seven, to recover a few points after his race one DNF.

It was a bad day for Cameron Beaubier who, after a poor start from second, dropped down to tenth. Beaubier started favorite to repeat his success of race one and began to make his way back up the order. With a few laps remaining, disaster struck and the defending champion crashed out. It was a costly error as he now trails Elias by 24 points in the championship standings.

Speaking after the race, Beach said”I just got to thank my whole team, the whole Attack Eastern Racing team. They believed in me. They gave me a shot on this bike when nobody else would. It feels good to get the win, but it feels good to reward them too.

“We’ve still got a lot of races to go. These guys aren’t going to let up. We’re going to keep fighting. To win this Superbike race is something I’ve looked forward to my whole adult life, since I was 16.”

For Gerloff, it was another great weekend with a second and third place finish. It was an emotional time for the American, as the opportunity to get his first win of the season was there to be had.

“We all know we give our lives to this,” Gerloff said. “It just sucks to have a win slip through my fingers again. I felt good and was right there. I felt like I had the pace to win, but JD got back around me. I just made one mistake after the next, after the next. It’s my own fault. It’s nobody else’s fault.”