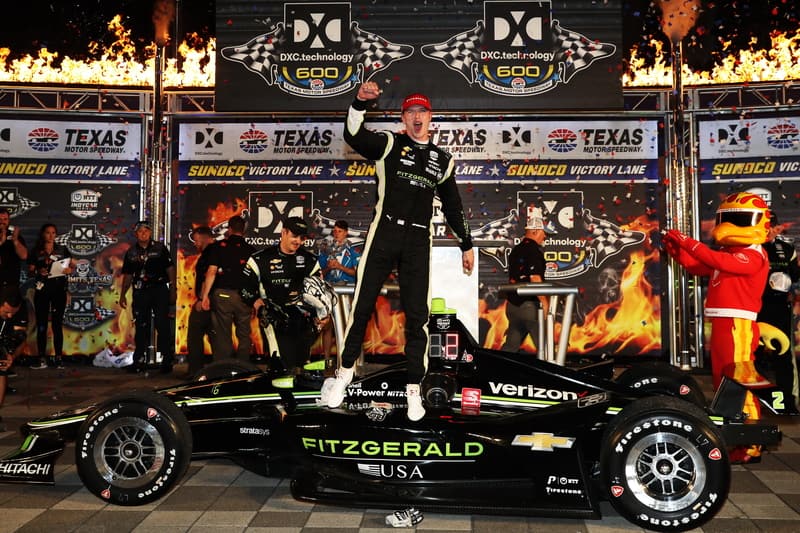 Team Penske‘s Josef Newgarden has taken victory in the 2019 NTT IndyCar Series DXC Technology 600 at Texas Motor Speedway after a thrilling race. Newgarden spent much of the race running in the lower regions of the top ten, but a fantastic strategy call saw him take the lead after the final pit-stops of the 248-lap race, with Josef going on to fend off his challengers from behind to take his third win of the season.

Last night’s race in Texas saw three main race-leaders over the course of the event. Pole-sitter Takuma Sato dominated the race early on, leading the first sixty laps by as much as four seconds at points before struggling to pass lapped drivers. However, Sato’s race would be irreparably ruined at the first pit-stops when he came into his pit-box too quickly, hit one of his crew-members and then stopped the car too far away from his box and right up against the pit-wall.

Thankfully, Sato’s mechanic was uninjured in the melee, but Sato would find himself four laps down as a result of the lengthy pit-stop and the subsequent stop and go penalty that he would receive for hitting his crewmember.

Whilst Sato struggled in the pits, Andretti Autosport‘s Ryan Hunter-Reay was taking the lead. The Andretti driver swept around the previous second-place runner, Scott Dixon, after the pair’s first pit-stops, thus meaning that Hunter-Reay was the new race-leader due to Sato’s mishaps.

Hunter-Reay would go on to lead the race for much of the middle stages of the race. However, his race was set to end badly after he was forced onto a four-stop pit-strategy instead of the preferred three-stop that his rivals were running on. This saw him fall back further into the top ten in the final fifty-laps of the race, but he was thankfully able to gain ground after a series of late caution periods.

As the end of the race drew near, the heir to the race-lead emerged. After a fantastic strategy call, once again, from Team Penske, Josef Newgarden would pit during a late yellow flag and would go on to use his fresh-tyres to ultimately cycle into the lead of the race after the final stops. Newgarden had not seemed to have the outright pace to take the fight to the previous leaders, however, he now had track position and had a shot at the win if he could hold off those challenging behind him.

Ultimately, with previous contenders such as Scott Dixon, Colton Herta and James Hinchcliffe coming to grief in the closing laps, Newgarden would be faced with a near ten-lap shoot-out for the win against Alexander Rossi. It would be close, but it would be Newgarden who would take the chequered flag on lap-248 to secure his first win on the high banks of Texas Motor Speedway and his third race win of the 2019 season.

Post-race, Newgarden would thank his team for the amazing strategy call that put him in a position to win the race in the closing stages. Despite having not looked fast enough for much of the event, Newgarden retains his championship lead once again, extending the gap between himself and Alexander Rossi in the standings.

For Rossi, it was yet another runner-up finish. He would take his third second-place finish in the last four races, ultimately trailing race-winner Newgarden by less than a second at the end of the race. As a result, he now sits twenty-five points off of Newgarden in the standings with eight races remaining in the championship.

Rahal Letterman Lanigan Racing‘s Graham Rahal would avoid all the carnage in the closing stages of the race to pick up a podium finish; his first of 2019. Likewise, rookie Santino Ferrucci put in a solid drive to stay out of trouble and take his best NTT IndyCar Series finish to date, bringing his #19 Dale Coyne Racing Honda to fourth-place despite having been well outside of the top ten for a vast majority of the race.

The top-five would be completed by Ryan Hunter-Reay. As expected, his four-stop strategy would effectively write him out of contention for the win, with the Andretti driver being unable to use his fresher tyres at the end of the race to pass all the cars ahead of him. Hunter-Reay would complete a top-five sweep for American drivers in the race, a feat which has not happened since 2001 at Gateway.

Last month’s Indianapolis 500 winner, Simon Pagenaud would take sixth-place. The Frenchman never really looked in a position to contend for the win at Texas. Arrow Schmidt Peterson‘s rookie Marcus Ericsson drove a solid race to take seventh at the chequered flag, with Sebastien Bourdais finishing in eighth place as the final driver on the lead lap.

Penske’s Will Power struggled for pace all-night long and would eventually finish one-lap down in ninth-place. Likewise, Marco Andretti simply did not have the pace of his Andretti team-mates and would have to settle for the final spot inside the top ten; benefitting from a number of drivers dropping out in the closing stages. Carlin‘s Conor Daly would take eleventh-place and would be the last driver to finish just one-lap down.

Further back, Ed Carpenter suffered an uncharacteristically poor race in Texas. Despite always being one of the favourites in an oval race, Carpenter’s #20 car simply looked way off of the pace. He would finish two laps down in thirteenth.

After his nightmare first pit-stop put him out of contention for the win, pole-sitter Takuma Sato would eventually cross the line to finish three-laps down in fifteenth-place, just ahead of Tony Kanaan who finished in sixteenth after yet another poor race for A.J. Foyt Enterprises. Kanaan would be the final driver running at the conclusion of the race.

It was a case of what might have been for Scott Dixon, Colton Herta and James Hinchcliffe. The trio were all in contention for the win before late incidents would see all three retire from the race and be classified in positions seventeen, eighteen and nineteen respectively.

Dixon and Herta would be eliminated simultaneously whilst the pair had been battling for third place on lap-229. Herta had been pulling off sensational overtaking manoeuvres throughout the race, but his attempted pace on Dixon looked to be one step too far. The Harding Steinbrenner Racing rookie looked up the inside of Dixon into turn three, but the gap on the inside looked a little too small for Herta’s #88 car to fit into. The pair would make contact and would both be sent into the outside wall and into retirement. Thankfully, neither were injured in the crash.

The teams and drivers of the 2019 NTT IndyCar Series have effectively been in action non-stop for over a month, having taken part in the Grand Prix of Indianapolis, qualifying for the Indianapolis 500, the Indy 500 race itself, the two races of the Detroit Grand Prix and finally, last night’s race at Texas Motor Speedway. It’s fair to say that the competitors have earned a little time off.

The next race in the 2019 championship will take place in two weeks time, with the teams and drivers heading to the famous Road America circuit in Wisconsin for the tenth round of the championship on Sunday, June 23.