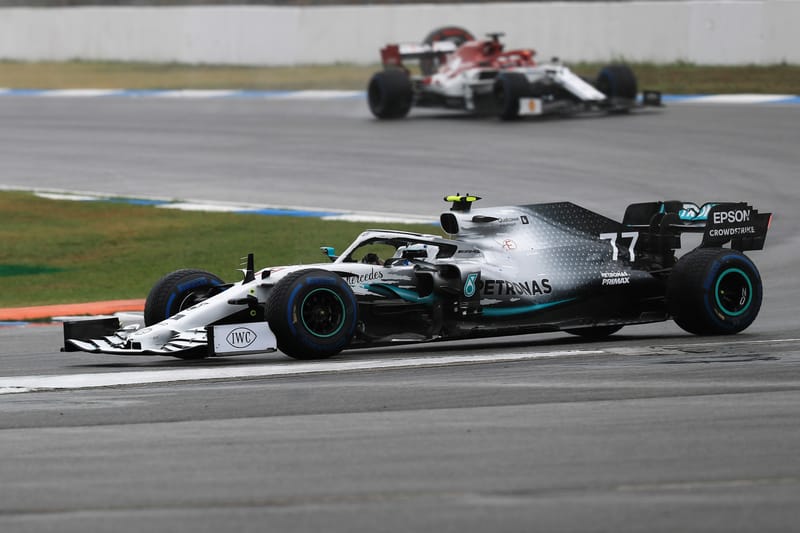 An under fire Valtteri Bottas says he didn’t have “any time to catch the car” in his late-race spin and crash in the 2019 German Grand Prix as the Finn misses out on an opportunity to close the gap to Lewis Hamilton in the drivers’ championship.

Bottas, who started the race third, leapt into second immediately as front-row starter Max Verstappen faltered off the line. Unlike fellow front runners Hamilton, Charles Leclerc and Sebastian Vettel Bottas suffered very few off-track moments and ran toward the front of the field throughout multiple safety-car periods and a raft of pit-stops as the weather continued to keep teams and drivers guessing.

With a clear dry line appearing late in the race and on slick soft tyres, Bottas slipped just inches wide of the dry line at turn one of lap fifty-six. His team-mate Hamilton had done similar just moments before, spinning fully before continuing; Bottas however, found the tyre barrier, ripping off his front wing and wheels to post his first DNF of the year.

“That was a really tough race and I’m very disappointed,” said Bottas. “It was tricky out there: the track was very slippery and the conditions changed all the time.

“It was very easy to make a mistake and unfortunately I made a mistake in the end which lost us a lot of points. It’s a shame because today was a good opportunity for me to make up some points to Lewis and it was my own fault that I ended up not getting any points at all in the end.”

Bottas was running fourth at the time of his crash, trailing the Racing Point F1 Team car of Lance Stroll for the final spot on the podium. The Finn admits he was pushing hard to finish on the podium as Mercedes celebrated 125-years in motorsport, making his DNF “very disappointing”.

“I had a good shot to get a podium and I was pushing hard to get past Stroll,” said Bottas. “I was quite close to the limit in Turn 1, then I suddenly lost the rear and just went off; I don’t think there was any time to catch the car.

“It’s very disappointing for the entire team, but we’ll give it everything to come back stronger in Hungary.”

The Finn’s crash comes at a time when rumours run rife that he’s due to be replaced at Mercedes-AMG Motorsport next year by Esteban Oconwho is currently the team’s test and reserve driver. With Lewis Hamilton claiming ninth in Germany, Bottas now sits second, forty-one points behind Hamilton, in the drivers’ standings.