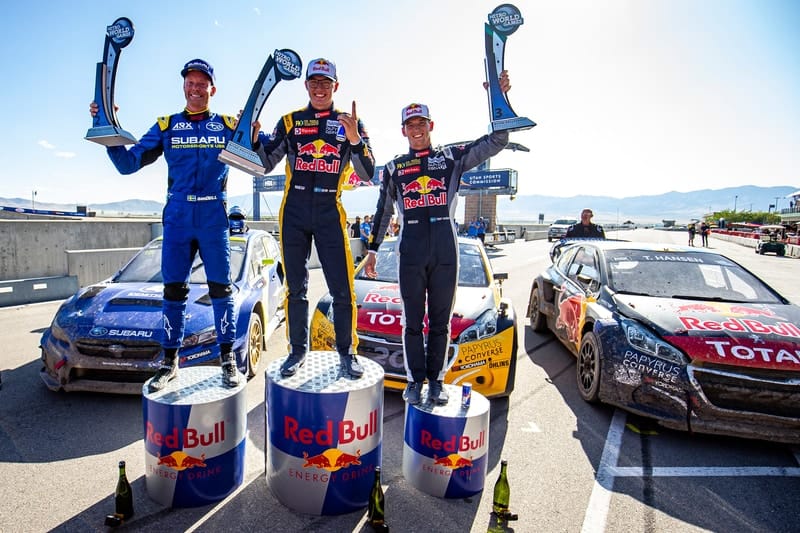 It was a Swedish 1-2-3 in the 2019 Nitro Rallycross in Utah as Kevin Hansen won on his debut. Patrik Sandell pushed Hansen all the way but could not get close enough to make a move on the 21-year-old.

Kevin’s brother, Timmy Hansen fought from the back to make the podium for a second year running. All three drivers were on maximum attack and were giving it everything on the tricky dirt track which the drivers adore.

After day one of qualifying it was Sandell at the top of the timesheets having tied the time points score of Kevin Hansen. Sandell finished on top by virtue of his stronger qualifying result and bypassed the other qualifying heats and the LCQ (‘Last Chance Qualifier’) to go straight to the final alongside Hansen.

The other eight drivers would have to qualify by winning the ‘challenger’ qualifying heats or by finishing in the top two in the LCQ.

Sadly, Scott Speed had to pull out from the event after fracturing his back in the opening heat race. Speed carried too much speed into the final jump and landed on the flat tarmac after the jump. The heavy landing was felt immediately and Speed complained of back pain as soon as he got out of the car.

He was rushed to hospital where he found out about his injuries. On his Facebook page, the former Formula One driver said:

“finally got an MRI done around 3am. We found I have three fractured vertebrae. Waiting now for the surgeons to give us the game plan.”

We wish Scott all the best in his recovery and hope to see him back in a car as soon as possible.

Back on the track, the drivers were vying for a spot in the final. In the first challenger race, Timmy Hansen used clever joker lap tactics to win his heat and progress to the final whilst Ken Block bravely took the 100-foot’ gap jump’ with three wheels on his wagon having suffered a puncture late in the race.

In the second heat, Travis Pastrana (the man spearheading Nitro Rallycross) led from start to finish, holding off Tanner Foust. Pastrana was overjoyed to make the final having missed out the final last year.

Foust, Block, Cabot Bigham, Steve Arpin and Chris Atkinson had to fight it out for the last two spots in the final.

In the final, each driver had to use each of the three-track layouts at least once: the joker lap, the ‘table-top’ route and the ‘gap’ jump (the fastest route of them all).

Timmy Hansen had an awful start and lost three positions so he decided to take the alternative ‘table-tip’ route but so did Block and Foust. All three drivers made contact and Hansen was shuffled to the back whilst his brother, Kevin, led the way with Sandell on his tail.

Block was running strongly until he suffered a fourth puncture of the weekend midway through the race. To say he had bad luck would be an understatement as Block has very good pace throughout the event.

Sandell and Kevin Hansen had the pace over the rest of the field and were giving it absolutely everything. They chose different tactics and on the last lap, Kevin took the joker lap with Sandell taking to the ‘table-top.’ They crossed over at one point but Kevin emerged ahead.

It wasn’t over yet as Sandell threw his car into the next three corners, trying to get to Kevin’s back bumper or to force him into a mistake. But the current FIA World Rallycross Championship leader withstood the pressure and just held on by 0.56 of a second.

Kevin Hansen said “it was the best six laps of his life” and there was a lot of emotion after the race as he celebrated with Timmy and the Hansen team.

Brother Timmy had excellent pace and if it was not for the poor start, he would have been in contention for the win. He took advantage of Block’s puncture and used great tactics (taking the table-top and joker lap routes in the first two laps to get clean air) to salvage a podium.

A mechanical issue for Pastrana cost him any chance of a podium whilst Foust finished fourth.

Overall, rallycross was the real winner with the unique Utah track putting on a fantastic show. The Nitro World Games is in Wales next year at the Principality Stadium in Cardiff. That means no Nitro Rallycross for at least a year but I’m sure when it does return, Pastrana will find a way to make the track and the show even better.

Love sport, especially motorsport. Fan of F1, Formula E, IndyCar, BTCC, Rallycross and V8 Supercars. So not too much then. Covering World RX for The Checkered Flag.
Articles

By Justin Nguyen
1 Mins read
Team Australia, represented by Toby Price and Paul Weel, will run this week’s Vegas to Reno, the Baja 400, and Baja 1000 in a black-and-blue Trophy Truck sponsored by Quad Lock.
Off Road

2023 Best In The Desert schedule released

By Justin Nguyen
2 Mins read
Seven rounds make up the 2023 Best In The Desert schedule, including a new UTV race in May while the Parkers 250 and 425 are consolidated into a joint weekend.