Xfinity cars throw back to days past for Darlington weekend 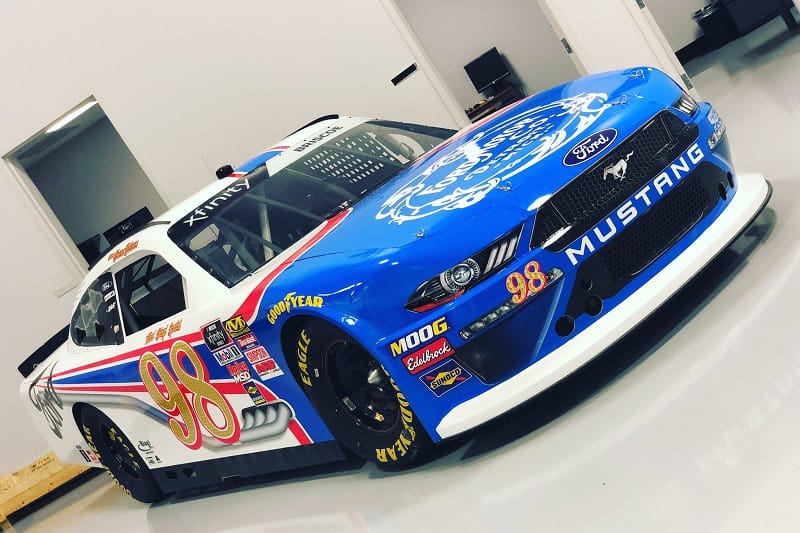 On Labor Day weekend, the Monster Energy Cup and Xfinity Series will run special paint schemes in the Bojangles’ Southern 500 and Sports Clips Haircuts VFW 200 at Darlington Raceway, respectively. The tradition began in 2015 when the Southern 500 returned to its Labor Day calendar.

With 2000 Cup and 1991 Busch champion Bobby Labonte set to enter the NASCAR Hall of Fame in 2020, B.J. McLeod‘s #4 car will honour the current Whelen Euro Series driver by throwing back to his #44 car in the 1990s. Running full-time in the series from 1990 to 1992 before moving up to Cup, Labonte finished in the top five in points all three seasons.

Stephen Leicht‘s #15 is based on Ken Schrader‘s #25 Budweiser car during the 1995 and 1996 seasons. Schrader, who currently races dirt tracks and operates an ARCA Menard Series team, has four Cup wins in a career that spanned nearly three decades.

JR Motorsports drivers Michael Annett and Justin Allgaier will honour Cup greats Jeff Gordon and Ricky Rudd, respectively; Annett’s #1 is inspired by Gordon’s #1 Baby Ruth car that he drove in the second tier prior to starting his illustrious Cup career. Allgaier’s throwback is based on Rudd’s blue-and-gold #90 Donlavey Racing car that he ran in 1979.

JRM owner Dale Earnhardt Jr. will drive the #8 in his first Xfinity start of the season. It will mark the longtime NASCAR fan favourite’s return to the race track after he and his family were involved in a plane crash in mid-August prior to the Bristol Motor Speedway weekend. Although those on board escaped with little harm, the NBC analyst skipped the Bristol races.

Earnhardt’s car is a throwback to his seven-time champion father, featuring a powder blue-and-yellow livery based on Earnhardt Sr.’s vehicle in his Cup Series debut in the 1975 World 600 at Charlotte Motor Speedway.

“This is something I’ve been wanting to do for a while,” Earnhardt Jr. said after revealing the scheme in April. “We had the perfect opportunity with the Darlington throwback race and I couldn’t pass up the chance. Hellmann’s has been completely supportive from the beginning and the whole concept aligns well with their core values.“

The Stewart-Haas Racing duo of Cole Custer and Chase Briscoe‘s throwbacks will pay tribute to a pair of Jones (of no relation to each other).

Custer’s #00 emulates another #00 in Buckshot Jones‘ Aquafresh car from the 1990s. Driving for his own Buckshot Racing team, Jones scored two wins in the Busch Series in 1996 and 1998, while he finished seventh in points in 1997.

While Custer is honouring a car of the same number, Briscoe is focusing on a different motorsport entirely. Briscoe’s #98 is designed after 1963 Indianapolis 500 winner Parnelli Jones‘ machine in that race. Jones also had 34 career Cup starts between 1956 and 1970, during which he won four races.

Briscoe will also sport a special throwback helmet for the 200:

JD Motorsports‘ Garrett Smithley will sport a white #0 with a #63 on the quarter panel. The design is a tribute to the late NASCAR Gander Outdoors Truck Series team owner Mike Mittler.

“Using the Raybestos paint scheme from Jeff’s rookie year was a no-brainer for us,” team president Chris Rice said in June. “Our CFO, Bob, who happens to be Matt Kaulig’s father, worked for Raybestos for 23 years, so we thought this was the perfect way to pay homage to him. We really appreciate both Jeff and Raybestos for giving us the opportunity to use this special paint scheme and give a special surprise to Bob.”

Team Penske owner Roger Penske will be honoured by his driver Austin Cindric and his #22 car. Cindric’s scheme is based on Penske’s 1963 Pontiac Catalina that he drove to his lone NASCAR victory at Riverside International Raceway.

The #35 of MBM Motorsports‘ Joey Gase will be based on that of Todd Bodine‘s #35 car in 1998. Nicknamed the “Tabasco Fiasco”, Bodine’s ISM Racing team endured a tumultuous history that saw poor performances, various driver changes, and legal action involving the Tabasco sponsor.

Jeremy Clements will drive a #51 resembling that of the character Rowdy Burns in the 1990 racing movie Days of Thunder.

“I grew up watching Days of Thunder all the time especially headed to Buck Creek Speedway in our cube van that my Grandpa Crawford built, and it would really get me pumped up to race,” Clements commented in early August. “Man, thinking back brings a lot of great memories in my early years racing with my Grandpa. I love this movie so much so that’s where I got the No. 51 from and have had it ever since.”

Brandon Brown‘s #86 is based on Terry Labonte‘s #14 Kellogg’s Corn Flakes car from 1993. The two-time Cup champion and 2016 NASCAR Hall of Fame inductee, driving for Hagan Racing at the time, finished eighteenth in points that year.

According to a Reddit user at the track, the #28 of H2 Motorsports was intended to be a Hut Stricklin throwback based on his 1996 Circuit City car (the electronics brand also sponsors H2). However, the team withdrew before the weekend after Shane Lee was released.

By Justin Nguyen
4 Mins read
NASCAR Cup points leader Denny Hamlin will start on the pole for Sunday’s race at Homestead, while Xfinity championship leader Austin Cindric will do the same for his series’ race the previous day.
NASCAR Xfinity Series

By Justin Nguyen
5 Mins read
18-year-old Ty Gibbs, in his Xfinity Series début with no prior experience in NASCAR’s national series, held off reigning champ Austin Cindric to win at the Daytona road course.