Razgatlioglu does the double in France with Superpole Race victory 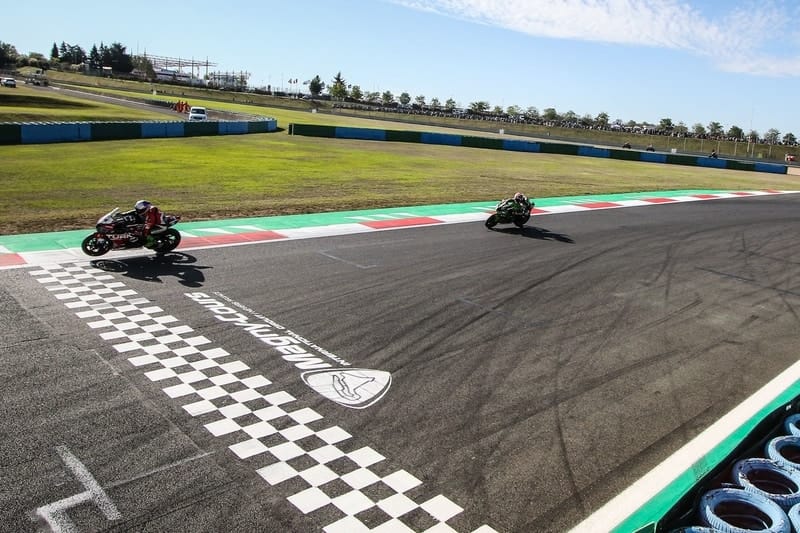 Toprak Razgatliolgu secured his second World Superbike win after his maiden victory in race one ahead of Jonathan Rea and Michael Van Der Mark.

Not only was this the second victory at Magny-Cours for Razgatlioglu, but it’s the second time he has come through from sixteenth place to do so.

As the lights went out, it was Van Der Mark who got the best start from the front row, and took the lead from Rea with a superb move into turn one. The top two were joined by Leon Haslam and the fast starting Tom Sykes from the second row.

Van Der Mark maintained his advantage by the end of lap one, but the danger man was Razgatlioglu, who made his way up eight spots from sixteenth to eighth.

As the lead group completed their second lap of the race, Razgatlioglu made up another three spots and in the process joined the leading riders.

The action really started to intensify at the beginning of lap three, when Rea retook the lead from Van Der Mark at Adelaide Corner, while Razgatlioglu made light work of both Haslam and Sykes at the same time for third.

With Rea now in the lead and trying to break away immediately, Razgatlioglu had to make his move quickly on Van Der Mark, and did just that at Adelaide Corner once again, which was quickly becoming a passing favorite for many riders.

As the leaders started lap six, Razgatlioglu had already closed Rea down with ease and wasted little time taking the lead from his fellow Kawasaki rider.

Rea was pushing to the limit to stay with the Turkish sensation, and managed to stay close going into the final lap. Rea had one opportunity left to make the move, but as he attempted a last gasp move at Adelaide Corner, the four-time champion ran wide which ultimately sealed the win for Razgatlioglu.

Van Der Mark held on for third ahead of a fast charging Chaz Davies in fourth. Fifth was the second Aruba.it Ducati of Alvaro Bautista, who produced yet another great ride from fourteenth.

Bautista was able to run at the same pace of the leaders when in clean air, and will now look to take full advantage of that with a fifth pace starting position for race two.

Alex Lowes took sixth place on the second Pata Yamaha ahead of Loris Baz, who managed to pip Sykes on the final lap for seventh place. Rounding out the top ten was Haslam in ninth and Michael Ruben-Rinaldi in tenth respectively.