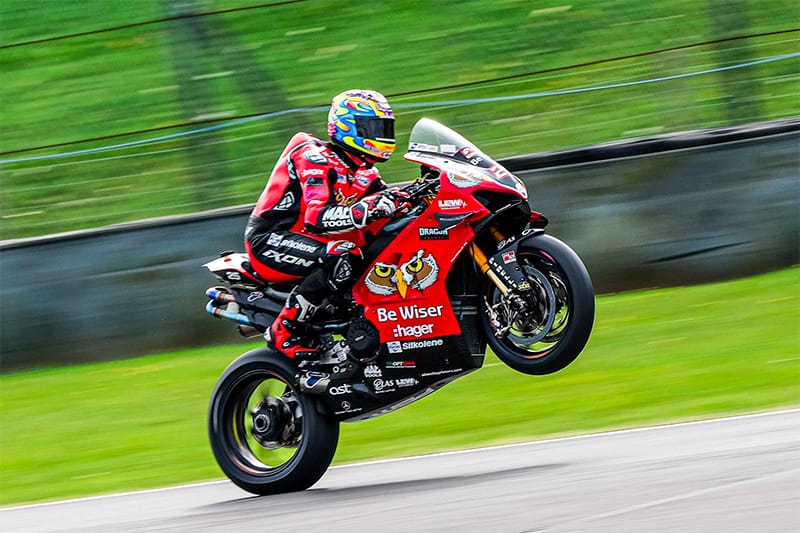 Brookes got a lightning start from pole position, taking the holeshot as the pack poured down Paddock Hill Bend, with fellow Ducati rider Tommy Bridewell close behind.

Whilst Brookes and Bridewell were starting to open a gap over the rest of the field, championship leader Scott Redding was recovering from a poor start that saw the Gloucestershire rider fall to twelfth position.

Redding picked his way through the pack, managing to avoid the mid-pack carnage early on in the race. Part of that carnage was Luke Mossey who high-sided on the exit of Surtees, narrowly avoiding contact with teammate James Ellison.

The drama didn’t stop there, fastest man in Free Practice One, Joe Francis’ PR Lloyd & Jones BMW suffered a catastrophic engine failure on the run down the Cooper Straight, dropping oil across the track in the process.

Caught up in the incident was RAF Regular and Reserves, Ryan Vickers and the only OMG Suzuki left in the race, James Ellison.

The race restarted after a fairly large stoppage with Brookes once again getting the holeshot.

As Brookes and Bridewell once again opened up a gap over the rest of the field, Christian Iddon was left to fight for third place as the TYCO BMW rider was left to fight with Danny Buchan, Jason O’Halloran and a hard-charging Scott Redding, who once again found himself recovering from a poor start.

Redding quickly picked his way through the pack and moved into third, but the gap to his fellow Ducati riders was too much, and settled for third.

Brookes crossed the line to take his fifteenth win at Brands Hatch ahead of Tommy Bridewell, who is no longer in contention of the Championship, and Scott Redding, who lost nine points to his teammate. That means the gap at the front is reduced to just nineteen points, with 50 points still left on the table.

Christian Iddon rounded out the top four with Buchan and Jason O’Halloran completing the top six.

Taylor Mackenzie held on to beat his brother, Tarran Mackenzie, as the Mackenzie brothers locked out the top eleven.

Dan Linfoot brought his TAG Yamaha home in twelfth ahead of Alex Olsen and Buildbase duo Luke Stapleford and Bradley Ray who collected the final point.

Brookes will start race two from pole position, which will kick off at 12:45pm (GMT)