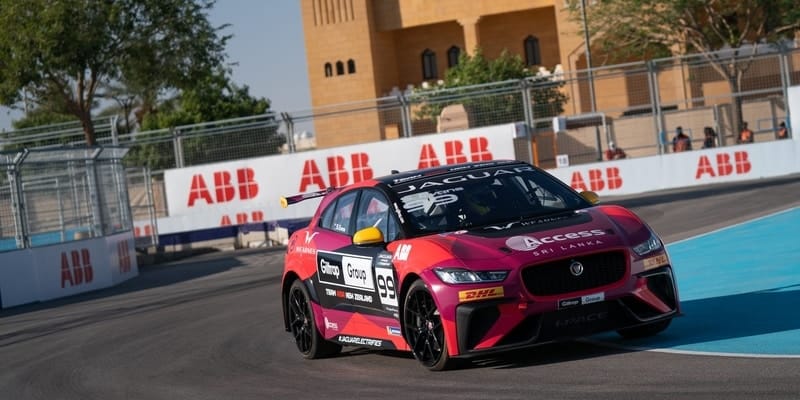 Simon Evans won the inaugural Jaguar I-Pace eTrophy race of the season, with Sergio Jimenez finishing second just ahead of Alice Powell after an intense battle between the duo.

Evans made a great start and held off the challenge from Jimenez into the first corner as Abbie Eaton held onto third position over Powell in the early stages of the race.

But it wasn’t long before Powell was able to overtake her British rival at turn sixteen after the Grand Tour star lost a lot of time on the third lap of the race.

Out front, Evans was a man on a mission, clearing Jimenez by over two seconds within a few laps which allowed the Kiwi to take his first Attack Mode on lap four. Then when the Brazilian armed his Attack Mode, he lost second place to Powell which forced him to fight with the British driver. This put pay to any hopes he had of challenging Evans for the race victory.

In the Pro-Am class, China Racing’s Yaqi Zhang showed his ability from last season and soon moved up to fifth position. He began pilling the pressure on VIP driver Eaton. She managed to defend for a few laps before she finally cracked when she locked up into the final corner and fell down to fifth place, which she maintained to the end of the race.

Reema Juffali was having a lot of fun; battling with Mario Haberfeld and Mashhur Bal Hejalia. And despite ultimately coming up short, she was able to complete the race as the first Saudi Arabian woman to compete in an international racing series event.

The remainder of the race was dominated by the battle between Jimenez and Powell as the eTrophy Team Germany driver had the best pace of anyone in the race. But she failed to deploy her second attack mode which cost her a second to Jimenez, although she showed such great pace that she managed to catch up to the back of the Brazilian.

Despite her best intentions, Powell ultimately could not find a way through and finished less than a quarter of a second behind the Brazilian. But she still claimed a well-deserved podium finish on her formal debut into the championship.

But it was Simon Evans who won the Diriyah Jaguar I-Pace eTrophy race just like last season, ahead of Jimenez and Powell at the end of an entertaining first race for the I-Pace racers.

Round Two of the season takes place tomorrow when the I-Pace eTrophy drivers will do it all over again.