Granado takes maiden win in the MotoE class at Valencia 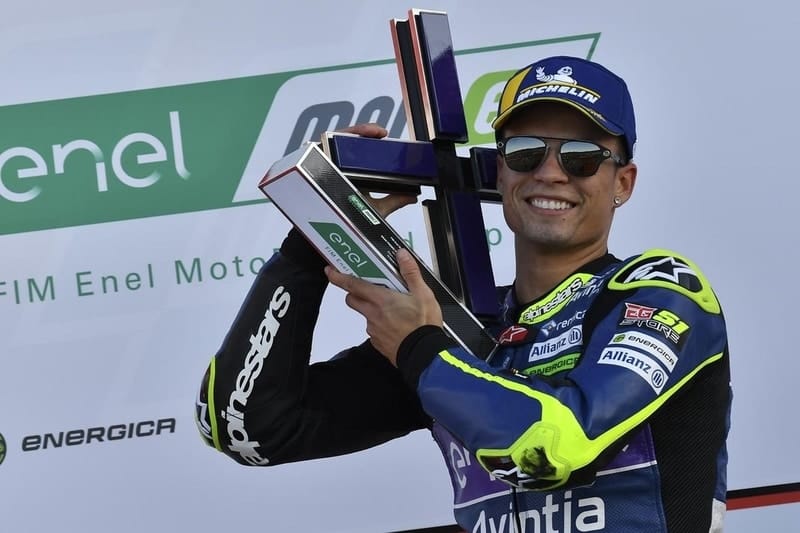 Brazilian Eric Granado took his first win of the 2019 MotoE World Cup in the penultimate race of the season at Valencia.

Granado was the Pole sitter heading into the race after Friday’s qualifying session and matched his points tally for the whole year with victory.

One of the outside championship challengers going the weekend was Bradley Smith of the One Energy racing Team who still has an outside chance of the title, and was quickest as the lights went out leading Granado into turn one.

The British rider started creating gaps instantly with his pace at the front, but three laps in Granado and Spanish rider Hector Garzo were slowly closing the gap down.

Garzo like Smith is a championship contender to series leader Matteo Ferrari, and both rider’s knew victory was crucial to close down the nineteen point lead.

With four laps remaining, Garzo set the fastest lap of the race as the lead became a three-way battle.

On the penultimate lap of the seven lap race, Granado made his move past Smith into turn one with Garzo following him through.

As Granado started the last lap his lead was too much for the duo behind to close down, after several superb overtakes between Garzo and Smith let the 23 year-old get just enough of a gap to be safe from a potential lunge at turn fourteen.

Championship leader Ferrari was fourth and moved one step closer to being the inaugural champion.

Fifth was Avintia Esponsarama Team rider Xavier Simeon, who was in a battle for the first half of the race with Ferrari, but could not sustain the Italian’s pace until the end.

Sixth was Alex De Angelis ahead of Niccolo Canepa and Jesko Raffin in seventh and eighth respectively.

Rounding out the top ten was former Moto2 rider Josh Hook in ninth and Mattia Cassadei in tenth.

Tune in for conclusion to the season with race two starting at 9:05 UK time on BT Sport.

25 Year old Motorsport enthusiast, with my expertise lying mostly with Motorcycle racing. Lived abroad when I was younger and I've also played a variety of different sports in that time. I'm currently studying Sports Journalism, with the hope of getting into commentary in the future.

MotoE: Pushing forward for the future

Quartararo back on top while Zarco stands out

Suzuki take control in the heat of Qatar

No change on day two as Quartararo fastest again

A new season, the usual protagonists, MotoGP is raring to go on...