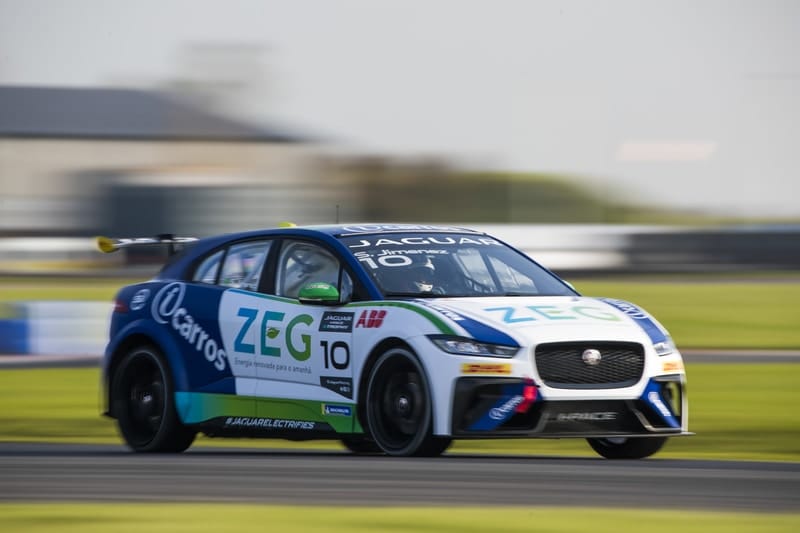 After an enthralling debut season of the Jaguar I-Pace eTrophy, the electric production car racing series is back with a bang as the second season will begin in earnest at Ad Diriyah this weekend.

The 2018-19 Jaguar I-Pace eTrophy was the inaugural season of electric production car racing series, and after a successful first season, things look like they will be even better for season two.

New for this season will be Attack Mode after successful trials following the season finale in New York City. The system will work in a similar way to Formula E; drivers will get a power boost when they go off-line to pick up the additional power for a specified amount to be decided prior to each event.

After clinching the inaugural drivers’ title last year, Sergio Jimenez will be back again this season, hoping to clinch a second successive championship crown. His Jaguar Brazil Racing team-mate Caca Bueno will hope to push him hard throughout the season.

But due to other commitments, Bueno will not be in Riyadh and will be replaced by fellow Brazilian Mario Haberfeld.

Haberfeld won the 1998 Brazilian Formula 3 title before success in Formula 3000 and the Champ Car World Series in a long and illustrious motorsport career.

The competition from the pro-class will be fiercer than ever as inaugural Jaguar I-Pace eTrophy race winner Simon Evans returns for Team Asia New Zealand. After finishing last season fourth in the championship, the Kiwi intends to string together a more consistent season to challenge the mighty Brazilians.

Simon Evans, Jaguar I-PACE eTROPHY driver said: “I’m proud to be back representing Team Asia New Zealand for season two. I learnt a lot last season and I can use that heading into the first round. Team Brazil who were the benchmark at the second half of season one are back and they will be fast no doubt. The ATTACK MODE is a great addition to the series where strategy will be key. I will be 100% ready come lights out in Saudi.”

Meanwhile, the pro-am class will be fiercer than ever before with only Yaqi Zhang returning with China Racing from last season, joined by rookie Sun Chao.

Saudi Racing will be confident, as while they may be I-Pace eTrophy debutants, they have a wealth of motorsport experience in Fahad Algosaibi and Mashhur Bal Hejalia for the forthcoming campaign. The Saudi duo will hope to deliver on the success of Bandar Alesayi from last season.

Jaguar I-Pace eTrophy Team Germany will be relying on the services of Alice Powell, who after finishing fifth in the VIP Car at Ad Diriyah last season, has secured a full-time drive for the forthcoming campaign.

But regardless of the perfromance from Reema Juffali in the Jaguar VIP Car, she will make history in becoming the first ever Saudi Arabian woman to compete in an international racing series event. This is fantastic opportunity to shine a spotlight on this sensitive issue and demonstrates that this championship goes above and beyond its remit as a sport.

When asked about the news she said: “I am thrilled to be the Jaguar I-PACE eTROPHY VIP driver for the first race of season two. I can’t wait to be out on track racing on home soil for the first time. The series has highlighted the innovation and progress of motorsport, giving more opportunity for men and women to compete together in cool electric racecars. It’s going to be an amazing weekend and I can’t wait to be out on the grid.“

In an unprecedented move, Jaguar have added a second VIP driver for both races in Ad Diriyah as Grand Tour TV star Abbie Eaton has also been given the opportunity to shine this weekend as the talents of two exceptional racing drivers will be on full display.

Hence, most recently, Eaton was competing in the Australian Super2 Series and was recently announced as part of the 2020 W Series line-up.

She said: ” I am excited to be racing in the first round of the Jaguar I-PACE eTROPHY in Saudi. The Riyadh track looks challenging and technical and I’ve heard fantastic things about the Jaguar I-PACE too! It’ll be a first for me racing a fully electric racing car so thank you to Jaguar Racing for the opportunity.”

After an scintillating debut season, the Jaguar I-Pace eTrophy will gear up for another electrifying season of racing, starting with a double-header on November 22 and 23 in the heart of the Saudi Arabian capital.