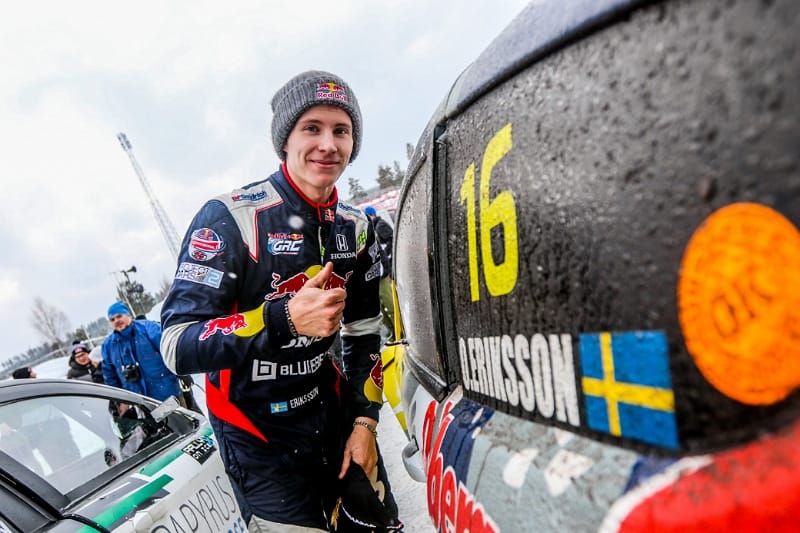 21-year-old Oliver Eriksson will make his final appearance in a Supercar Lites rallycross car at RallyX on Ice that takes place in Luleå, Sweden on 28 March.

Eriksson has always been on the top of the game in the single-make class, recently claiming his second RX2 International Series title last season at Cape Town, South Africa.

Since the start of his career, he has been on top of the podium eight times out of his fourteen outings in the series.

Eriksson also claimed the title in the American GRC Lites series, the support category to the former Red Bull Global Rallycross series, with five wins and another fourteen podium finishes.

He has also been contesting RallyX on Ice, taking a win last year in Åre. This year as the series will be held together with the Swedish ‘Winter Olympic’ week, and it will be the last time Eriksson is stepping in a 340bhp four-wheel-drive machinery.

“I’m super pumped for RallyX on Ice, it’s always a great event to kick-start the rallycross season, and being part of SM-veckan guarantees a sky-high profile and a big crowd.” Eriksson said.

“Driving on ice requires a different approach, but it’s a challenge I relish and after things didn’t quite go to plan last year, I’m determined to regain my crown”

“It’s strange to think this will be my last appearance in Supercar Lites. I have to say, it’s been a hell of a ride – and far more than I could ever have expected!”

“I’ve learned so much along the way, and in terms of preparing drivers to step up to Supercar level, you honestly couldn’t ask for anything better. As a single-spec category, the racing is always extremely close and that really teaches you to focus on the finer margins and the last few hundredths and thousandths-of-a-second that make all the difference in rallycross.” Eriksson continued.

“You only have to look at the names of some of the drivers that have used it as a springboard to Supercars – Kevin Hansen, Cyril Raymond and my brother Kevin Eriksson to name just a few – to appreciate Supercar Lites’ success, and now it’s time for me to step up and move on as well. “

“We came within a point of winning the Supercar title in RallyX Nordic last year, and I’m looking forward to announcing my 2020 plans shortly. Watch this space…” Eriksson added.

Together with his team Olsbergs MSE, he will be joined alongside the newcomer Martin Enlund and his main rival but also team-mate from last season, Jesse Kallio.

Kallio made his debut in Supercar Lites in RallyX Nordic at his home-track in Kouvola where he also won the event, this season Kallio is looking to entering the series full-time as he is targeting to defend his 100 per cent winning record at the season-opener in Höljes on 22-24 May.

“It’s been a long winter with not so much driving, so it will be good to get back behind the wheel and dust off the cobwebs on the ice!” Kallio said.

“Being a single-day event, there’s no need to play the percentages or play it safe – it will be flat-out from start to finish and I can promise there will be no prisoners taken. It’s always fun to perform in front of big crowds, which I’m sure will be the case at SM-veckan. Have no doubt – we’re going to put on one hell of a show!”

“I had a great debut in RallyX Nordic on home soil last year, so I’m looking forward to returning to the series this season – and where better than at Höljes,” Kallio continued.

“It’s a classic rallycross track – one of the truly legendary circuits in the sport – and one of my favourites on the calendar. It’s just a fantastic place to race!“

“The field is already shaping up to be ultra-competitive with a lot of very fast drivers and Scandinavian specialists, so I’ll need to ensure I’m absolutely on top of my game – but I’m more than ready for the fight!” Kallio added.

Oliver is the son of Andreas Eriksson, who is a former rallycross driver in the FIA European Rallycross Championship, he is the CEO of Olsbergs MSE that is designing and building these cars together with the Turkish firm Avitas Motorsport.

Berget Steps Up to Supercar Lites for 2021

By Nigel Chiu
1 Mins read
Magnus Dall is ready to make his debut in the RallyX Nordic next year as he looks to progress from two-wheel drive to four-wheel drive rallycross competition.