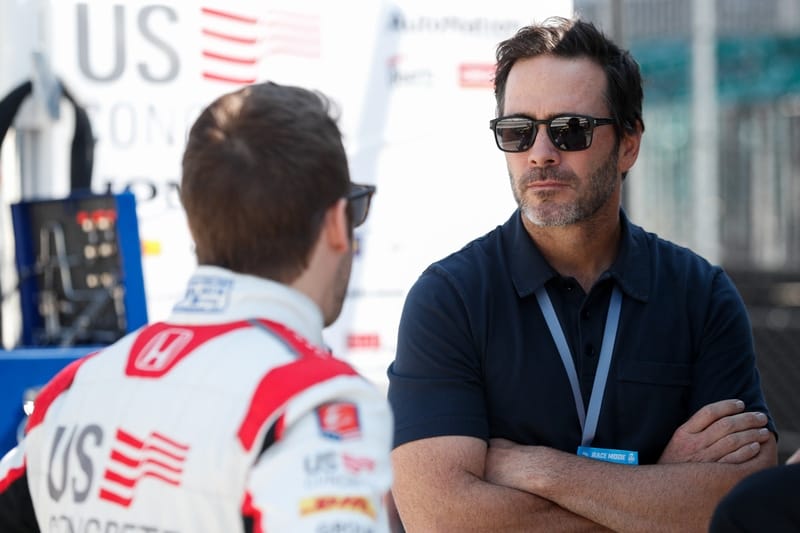 Arrow McLaren SP has confirmed today that seven-time NASCAR Cup Series champion, Jimmie Johnson, will take part in a test with them at Barber Motorsports Park next month. The test will be the first time that Johnson has driven an NTT IndyCar Series machine and will likely come ahead of a race debut in the not too distant future.

Johnson has long expressed an interest in taking part in the NTT IndyCar Series in a limited capacity once he retires from NASCAR Cup Series racing at the end of this year. Johnson’s first public comments about his wishes to race in IndyCar came back at the end of 2018 after taking part in a seat swap with Formula 1‘s Fernando Alonso at the Bahrain International Circuit.

At the time, Johnson made it clear that it was not his wish to take part in the Indianapolis 500 or any of the other high-speed ovals on the calendar. Instead, he was more interested in taking part in a road course or street circuit race.

“I’m not overly excited about those fast ovals, but I think with my status and relationships I could put together some road course races in INDYCAR,” Johnson said at the time. “I’ve done sports car racing in the past, I’ve finished second in the Rolex 24 a couple of times in the Prototype division, I’d love to get back to doing that. Anything’s open.

After that, nothing much more came of Johnson’s IndyCar hopes. That was until the last few months. Johnson announced last November that he would be retiring from full-time NASCAR Cup Series competition at the end of 2020. A few months later, Johnson attended the IndyCar pre-season test at the Circuit of the Americas as a guest of Arrow McLaren SP. Further hints of Johnson’s IndyCar chances escalating came in numerous tweets during the last few weeks, including one shot of him driving an IndyCar at Barber Motorsports Park on iRacing.

Today, however, came the confirmation of Johnson’s first IndyCar test. Johnson visited Arrow McLaren SP’s race shop in Indianapolis today for a seat fitting and would confirm on Twitter shortly afterwards that he would be testing an Arrow McLaren SP IndyCar at Barber Motorsports Park in April.

When he attended last month’s IndyCar test at COTA, Johnson spoke of how racing in IndyCar has always been a dream of his:

“This is a totally different world than what I’ve been used to, but it’s a world I dreamed of racing in when I was a kid growing up in San Diego,” Johnson said last month. “My heroes were the guys that raced in the Indy 500. I’d go to the Long Beach Grand Prix and watch, hang out and wanted to be in a car going by.“

“…[INDYCAR] has always been a bucket list category for me to come see these cars, be around these cars. [Next year] is open for me and who knows what opportunity might come along in INDYCAR, sports cars or back to my off-road roots. I’m just taking it all in and see what comes of it.”

Johnson’s IndyCar racing opportunities for the remainder of 2020 are rather limited due to his commitments racing in the NASCAR Cup Series. Every single race of the 2020 IndyCar Series clashes with a NASCAR Cup Series race. The only theoretical possibility would be for Johnson to race the Indianapolis 500 on the same day as the Coca Cola 600 at Charlotte Motor Speedway; a feat that has been attempted by drivers such as Kurt Busch and Tony Stewart, Robby Gordon and John Andretti in the past. However, Johnson’s previous comments regarding his lack of interest in racing on the high-speed ovals put pay to this plan.

It is far more likely that we will see Johnson make his IndyCar racing debut at some point during the 2021 season once he had retired from NASCAR Cup Series competition. If budget allows, Arrow McLaren SP could, theoretically, field a third car that could be driven by Johnson for the road course and street circuit races on the calendar, with another driving stepping in to race on the ovals; perhaps even someone such as Fernando Alonso. This, however, is purely speculation at this stage.

Should Johnson be confirmed for an IndyCar debut in the future, he would be the latest in a number of champions of other racing disciplines to try their hand at IndyCar racing. Aforementioned Formula 1 champion, Fernando Alonso, and Virgin Australia Supercars champion, Scott McLaughlin have both driven in IndyCar recently; with McLaughlin set to make his race debut at the Grand Prix of Indianapolis in May.

The 2020 NTT IndyCar Series will kick-off with the season-opening Grand Prix of St. Petersburg on Sunday, March 15. Johnson will be back in action in the #48 Hendrick Motorsports Chevrolet Camaro in this weekend’s NASCAR Cup Series race, the FanShield 500 at Phoenix Raceway, on Sunday, March 8.

Fans to return to IndyCar at Road America doubleheader

Sato “sorry to all the fans” after qualifying wreck wrote him out...