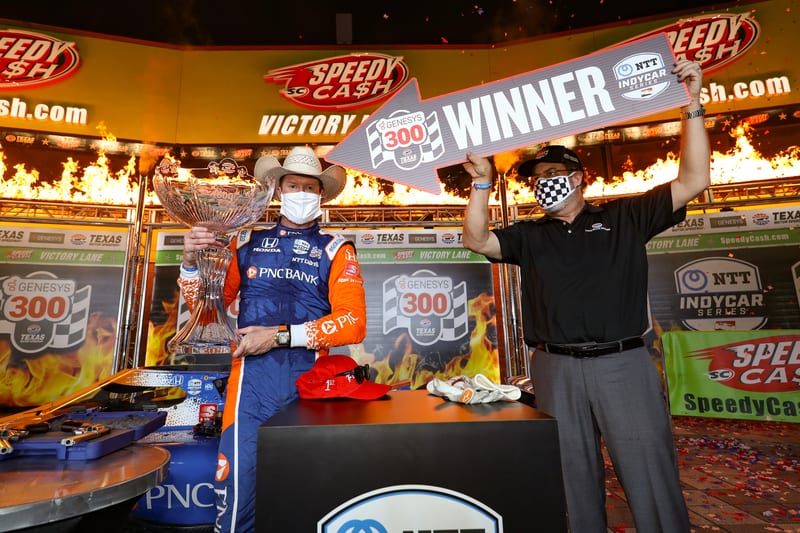 Scott Dixon has taken victory in the 2020 NTT IndyCar Series season-opening race, the Genesys 300 at Texas Motor Speedway. The New Zealander ultimately cruised to the chequered flag relatively unopposed after his main competition – Chip Ganassi Racing team-mate Felix Rosenqvist – crashed whilst chasing him down for the win with just over ten laps to go. With lapped cars between himself and his rivals on the restart with three to go, Dixon would take the win by almost four seconds.

IndyCar’s return to the race track has been met with many challenges brought on by the current state of the world due to the COVID-19 pandemic. However, the 2020 championship finally got underway with a two-hundred lap race on the high-speed Texas Motor Speedway.

Both practice and qualifying were held on the same day as the race, with Team Penske‘s defending series champion, Josef Newgarden, claiming pole position just over two hours before the green flag flew to start the race. Newgarden would hold the lead when the race got underway and would go on to lead for most of the first stint of the race.

Due to the COVID-19 pandemic, IndyCar’s tyre suppliers, Firestone, were unable to make new tyres to be used for this weekend’s race. As a result, IndyCar brought the alternate tyre compounds that weren’t used in last year’s race for the teams to use this time around. As a precautionary measure, the teams were also told that drivers could not complete any more than thirty-five green flag laps on one set of tyres. This would be almost half of the usual Texas stint length and would, therefore, limit the amount of strategies options available to the teams.

To make things even trickier for the teams, the drivers only had one practice session to prepare for both qualifying and the race. As a result of this, it appeared as though some teams did a better job with their race setups than others. One team that appeared to have some nasty side effects with their setups were Team Penske.

Throughout the race, Josef Newgarden and Simon Pagenaud would report numerous vibrations and issues. Meanwhile, Chip Ganassi Racing seemed to have gotten their cars into a pretty sweet spot. After fending off an attack from Pagenaud at the start, Dixon would soon begin to close in on Newgarden; who was struggling to deal with lapped traffic. After being stuck behind Newgarden for a handful of laps, Scott would finally make his move on lap thirty-two, with Newgarden peeling into the pits after complaining of rear grip issues.

The rest of the field would pit soon after for their first pit-stops, with the race then going to a full course caution a few laps later after a collision between two of the three rookies. After crashing in practice and missing qualifying as a result, Rinus VeeKay found himself out in the low-grip high-side of the banking through turns one and two. The lack of grip, exacerbated by the traction compound laid down by the NASCAR Cup Series back in November, sent VeeKay helplessly into the outside wall, with the Dutch driver then spinning back down across the track and into the path of the innocent Alex Palou. Both would be eliminated in the incident.

At the restart, Dixon would sprint away into a comfortable lead of almost ten seconds. Newgarden would remain in second place, kept company by his team-mate Pagenaud who looked faster but found it difficult to find a way by. In the meantime, Dixon’s Ganassi team-mate, Felix Rosenqvist, was bringing himself into contention after having started the race in ninth.

Rosenqvist’s car looked just as fast as Dixon’s, but he also found it difficult to pass due to the lack of a significant high-line due to the ironically slippery traction compound. Eventually, the Swedish driver would pass Pagenaud to take over third-place just before a caution for debris on lap seventy-seven.

Dixon’s near-ten second lead would be evaporated by the caution. To make matters worse, a delayed pit-stop would see him lose the lead to Newgarden, with Rosenqvist also passing him on pit-road to take away second-place. Determined to get back to the lead, Dixon would pass Rosenqvist around the outside of turn one on the restart, with Felix forced to check up whilst right on the gearbox of Newgarden.

Dixon seemed to have the most confidence of any driver on the track. After waiting for a handful of laps, Scott would seize his opportunity and take the lead of the race back from Newgarden with another fantastic move on the outside of turns one and two. Rosenqvist would try to follow him through into second place, but the Swede seemed to lack the pace, or perhaps the confidence, of his team-mate; with Felix still in only his second year of IndyCar racing and this race being only his sixth on an oval.

Rosenqvist would finally pass Newgarden over twenty laps later when the American’s pace started to fall off once again. Newgarden would then begin to plummet, with Pagenaud soon passing him for third, followed by the A.J. Foyt Racing Chevrolet of Charlie Kimball; who was having an astonishing race after starting down in twelfth. Zach Veach would also pass Newgarden soon after, with Zach also having a strong race after a disappointing 2019 season.

Whilst Dixon looked to have the best car on the track, lapped traffic would still present an issue. What had been a ten-second gap to his team-mate soon evaporated to just under two seconds as the penultimate pit-stops came around. Dixon had the better pit cycle and would extend the lead back to over four seconds, but traffic in the form of Marco Andretti would soon bring the gap back down to under a second.

With the field pitting over thirty-five laps before the end of the race, one more pit-stop was in order as the race drew to a close. The first of these pit-stops from the leaders would come with fifteen laps remaining. Rosenqvist would pit along with much of the field soon after. Dixon, on the other hand, stayed out three laps longer to utilize clear air. The plan worked perfectly, with Dixon emerging in traffic, but just over a second ahead of Rosenqvist who had been caught up in traffic ever since leaving the pit-lane.

Rosenqvist, determined to try and take the fight to his veteran team-mate, would soon find himself bogged down behind the lapped Andretti Autosport Honda of James Hinchcliffe. With James slow in turns one and two, Marco Andretti would swoop around the outside of both Hinchcliffe and Rosenqvist. Felix then tried to pop to the outside and pass Hinchcliffe too, only to the Swedish drive to be caught out by the dreaded lack of grip.

Rosenqvist’s #10 car would spin on the exit of turn two and would slam into the barrier rear-end first. The caution would be displayed, with Felix slamming his steering wheel in frustration as a potential shot at victory slipped away.

With so little time remaining in the race, there would – apparently – not be enough time to get the lapped cars cycled to the back of the field for the race restart with three laps remaining. This meant that Dixon would restart the race with multiple lapped cars between himself and the now second-placed driver, Pagenaud.

Relatively unopposed, Dixon made a break for it on the restart and would quickly build a comfortable lead. He would cross the line at the end of lap two-hundred to take the race victory in the 2020 Genesys 300 with a margin of over four seconds ahead of second-placed Pagenaud.

For Dixon, his fourth victory at Texas Motor Speedway was just what he was looking for. A disappointing 2019 season saw him unable to defend his championship crown. Now, after a delay to get the 2020 season underway, he finds himself back on top of the standings after the best start he could have had.

The podium would be completed by the reigning champion, Josef Newgarden, who finished just over a second behind his Penske team-mate, Pagenaud. Both drivers complained profusely throughout the event about vibrations, so for both to come away with a podium would likely be a relief.

Fourth-place would go the way of Andretti Autosport’s Zach Veach; matching his career-best finish and also taking his first top-five finish since his rookie season in 2018. Fifth-place would go to Ed Carpenter, who rallied back fantastically after a shaky start to the day when he spun in practice. Close behind would be sixth-placed Conor Daly, with the American putting in another sterling effort in the #59 Carlin Chevrolet. Daly will be taking over Carpenter’s #20 car for the next race on the Indianapolis Motor Speedway Grand Prix circuit in a month’s time.

Seventh would go to Colton Herta in his first race under the Andretti Autosport stable. The #88 Andretti Harding Steinbrenner Autosport driver qualified disappointingly down in fourteenth but kept out of trouble to take a solid haul of points away from the lone star state.

Eighth would go to Ryan Hunter-Reay, who had been due to start in fourth-place until a technical gremlin just prior to the green flag saw the team have to work on the car, thus earning him a drive-through penalty for unapproved adjustments. A similar series of events would also befall his team-mate, Alexander Rossi, who fell further back than Hunter-Reay and would never quite recover. Rossi would ultimately finish a lap down in fifteenth.

Ninth-place would go the way of Arrow McLaren SP‘s Oliver Askew. The reigning Indy Lights champion would be the highest-placed rookie after driving a cool, calm and collected race on his debut in the NTT IndyCar Series. Rounding out the top ten would be A.J. Foyt Racing’s Tony Kanaan in what was his final race at Texas Motor Speedway.

After threatening to take a podium finish in the mid-stages of the race, Charlie Kimball would fall back during the final pit-stops and would then crash on the final lap. The American went too high in turns one and two and hit the outside wall, with his #4 Foyt Chevrolet then being sent spinning into the outside wall. He would be classified one lap down in eleventh place.

Penske’s Will Power looked to have similar luck to that which he often experienced last year. The Australian hadn’t been as high up in the top ten as his team-mates, but his day would be worsened when a delayed pit-stop saw him fall off of the lead lap. He would finish the race one lap down in thirteenth-place.

Five drivers would not be running when the chequered flag flew. The aforementioned Felix Rosenqvist would be classified as a retirement in twentieth place after wrecking out of second-place. Also in retirement would be Santino Ferrucci after late-race pit-stop dramas, as well as Rinus VeeKay and Alex Palou after their early incident.

One driver would sadly fail to even start the race. After a heavy wreck in qualifying, Rahal Letterman Lanigan Racing was unable to get Takuma Sato’s #30 Honda fixed and through a technical inspection before the green flag.

The 2020 NTT IndyCar Series will continue in just under a month’s time with the second round of the season, the GMR Grand Prix at the Indianapolis Motor Speedway Grand Prix circuit on Saturday, July 4.

Pagenaud: “It was a tough, dramatic weekend, but we prevailed”