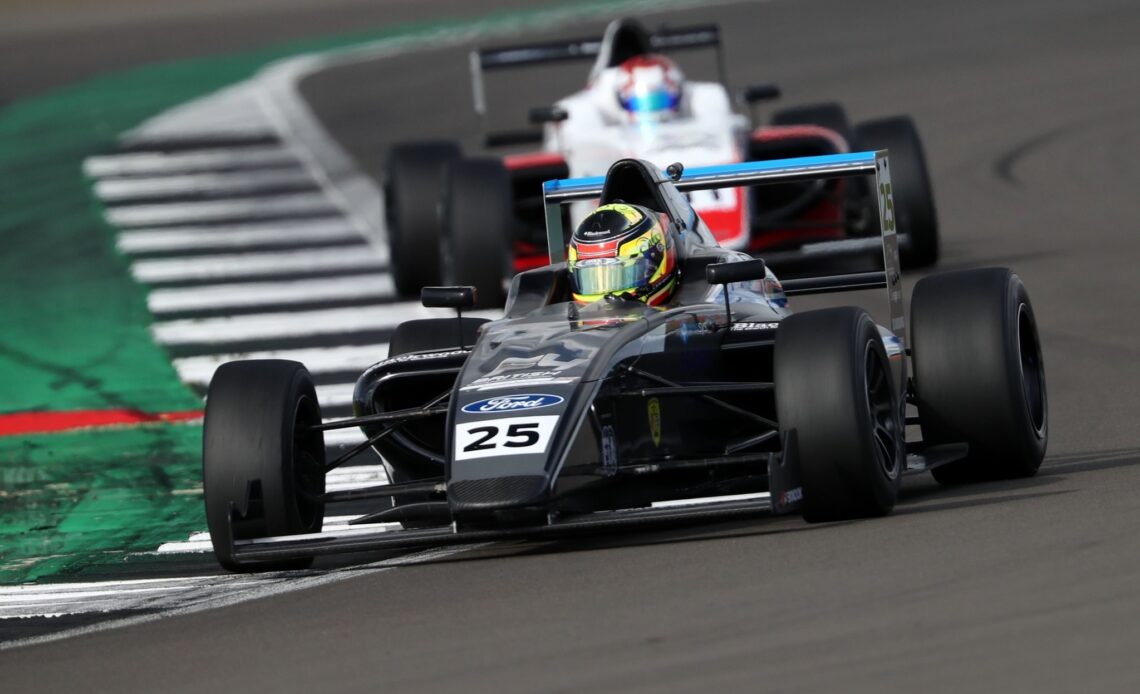 Race three at Silverstone for the sixth meeting of the 2020 British F4 Championship provided an historic result, as Argenti Motorsport and scholarship winner Casper Stevenson scored their first victories in a massively competitive series, with championship rivals Luke Browning and Zak O’Sullivan closing up their title battle.

Stevenson grabbed the lead on the opening lap, with Connor falling into second. Luke Browning and Zak O’Sullivan battled for third, with the latter of the two taking an early advantage. On the third lap, JHR Developments team mates Abbi Pulling and James Hedley made contact going onto the Wellington straight and that demoted the triple winner from Thruxton to the rear of the field.

Out front, Casper Stevenson was setting fastest laps and slowly pulling away from Alex Connor in second place. Championship leader Browning was now setting fastest laps in fourth place and was beginning to turn the pick up on the pressure applied to O’Sullivan for third.

At the bad of the pack, battle had resumed between Pulling and Hedley as they were both applying pressure on Reema Juffali for eighth place who was having a stellar weekend so far. Hedley managed to take advantage on his team mate to to eventually move into eight place himself.

The Arden pair or Roman Bilinski and Frederick Lubin were having another respectable race in fifth and sixth respectively, with the two seemingly being joined at the hip all weekend with some exciting on track battles in all three races.

The top two of Stevenson and Connor were now pulling away from O’Sullivan in third, with the race one winner now coming under more pressure from Browning, who would be looking to not lose too many points to the Carlin man – a damage limitation weekend for the championship leader.

But with just eight minutes remaining, James Hedley was off the track at Luffield and tried his hand at rallycross to get his car back on track, but to no avail. A disappointing end to the weekend for the JHR man who was on such a high after his stellar Thruxton weekend. This incident brought out the safety car and would bunch up the field, erasing Stevenson’s great work in gapping Alex Connor out front.

The lights went out on the safety car with just four minutes remaining, and it was up to Casper Stevenson to try and make history for Argenti Motorsport and himself in winning their very first race in British F4.

Abbi Pulling would eventually make it past Juffali for eighth, as Mansell and Lubin were in gloves off mode for rookie honours, swapping places just ahead for sixth place, with the Arden rookie falling down behind Pulling and Juffali in the process.

But at the chequered flag, it was Casper Stevenson that took a fantastic maiden victory ahead of Alex Connor and Carlin’s Zak O’Sullivan, with championship leader Luke Browning in fourth, just holding off a charging Roman Bilinski on the final lap.