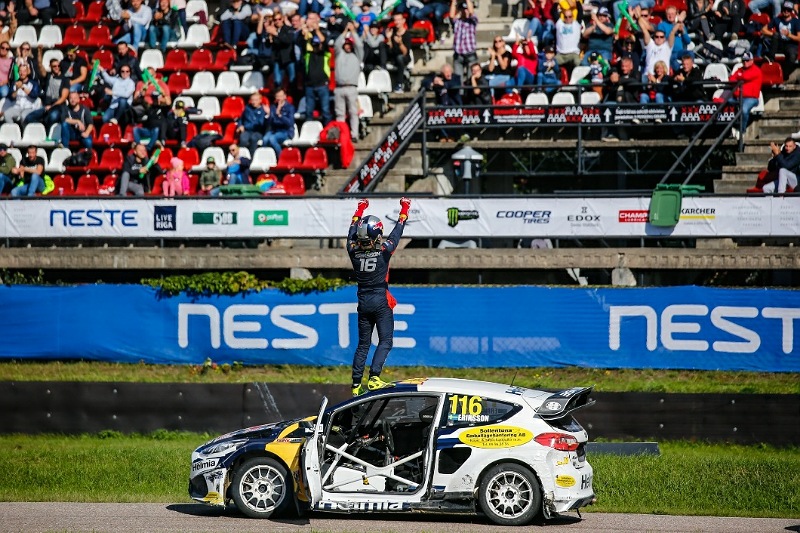 The second day of the 2020 FIA European Rallycross Championship at Riga saw Oliver Eriksson finally take a win at the Latvian citcuit and claim his second win of the season.

Eriksson had a terrible start to his event yesterday after he was involved in a collision with Andréa Dubourg on the opening lap of the first qualifying session before then losing out in Q2.

But early on Sunday, Eriksson had a better run to claim the win in qualifying three but the bad luck then appeared to continue for him as his front-right suspension collapsed at the jump during the jokerlap.

These problems didn’t continue for much longer however, as Eriksson then went on to win Q4 ahead of the semi-final.

Jean-Baptiste Dubourg had great pace throughout the weekend. After he managed to claim the top qualifier spot from Sondre Evjen in the third qualifying session, he then managed to held on tothe spot by finishing second behind Eriksson in Q4

Thomas Bryntesson however struggled on Sunday and was pushed in to a spin by Peter Hedström in the third qualifying heat. Hedström was given a 10 seconds penalty as a result, although Bryntesson was forced to retire as a result of the damage he suffered.

Dan Öberg, who had two retirements yesterday did make it out on to the track on Sunday morning and after Bryntesson’s retirement, he was able to move forward as the last of the 12 qualified semi-finalists.

Mikko Ikonen had to retire from the second session yesterday due to technical issues with his car but returned on Sunday to win his race in Q3 this morning after making a fine pass on Ales Fucik.

In the first semi-final, of course the top qualifier Dubourg lined up alongside Evjen and as the lights went off it was Dubourg who took the early lead but was closely followed by Evjen.

Peter Hedström jokered the following lap to cover off Ikonen but as he came out of the joker lap merge, Ikonen found a gap on the inside to get past Hedström and take fourth place.

Dubourg then jokered on lap five while leading the race, while Evjen had to wait until the final lap to try and set a lap time fast enough to help catch up to Dubourg.

Evjen was the final to take the joker, this time on the final lap, but ran wide on the entrance although managed to hold off Dubourg and won the semi-final by a tiny advantage over his rival.

In the second semi-final it was all eyes on both of the championship frontrunners, leader Eriksson and rival Ben-Philip Gundersen.

Eriksson took an early lead after turn two but was chased closely by Gundersen, who decided to joker on lap two to try and get into some clear air to push harder and that in turn released Andréa Dubourg who now followed Eriksson.

On the following lap both Eriksson and Dubourg went into the joker to try to cover Gundersen but only Eriksson managed to stay ahead of him as they returned back onto the circuit.

Gundersen was then all over Eriksson on lap four but as Eriksson ran wide in the last turn, Gundersen found a gap on the inside which he went for and squeezed past the championship leader.

The battle between them continued to intensify after turn three. Eriksson ended up side-by-side with Gundersen on the small straight before the hairpin and was then forced wide towards the tyre wall which he clipped but did stay ahead of his rival.

At the jump section once again the pair were side-by-side but this time Gundersen outbroke himself and suffered a half-spin that let Eriksson again take the lead which he held until the end of the race.

Gundersen managed to hold on to second but was closely followed by Dubourg. Gundersen was also given a reprimand from the stewards following the incident at the hairpin.

In the final it was once again Eriksson who took the early lead but was followed closely by Jean-Baptiste until he ran wide in turn two that led to both Sondre Evjen and Gundersen getting ahead.

Evjen almost rolled his car when he clipped the tyre barrier at the jokerlap entrance, but managed to hold off Gundersen despite going up on two wheels.

Gundersen race soon turned into disaster and he later spun that forced his car to be stranded in the middle of the circuit which then led to a huge pile up.

Tamas Karai hit Gundersen’s car and that incident also led to both Jean-Baptiste and Andréa Dubourg getting involved despite trying to avoid the carnage ahead.

Evjen then went to take the joker on lap five and it seemed as if he had the pace to take the win, but as Eriksson jokered on the last lap, he managed to come out in front of Evjen to take his second win of the season.

Jean-Baptiste, who won in Latvia last season, took third followed by Andréa. Gundersen and Karai, who both had stopped at the hairpin, recovered to cross the line in fifth and sixth respectively.

The season finale of the 2020 Euro RX season is scheduled to take place at Spa-Francorchamps in Belgium on 21/22 November.

Euro RX: Evjen is Top Qualifier After Riga Day One

By Pontus Lindroos
1 Mins read
18 drivers will line up for the second round of the 2020 FIA European Rally Championship on 19/20 September in Latvia.