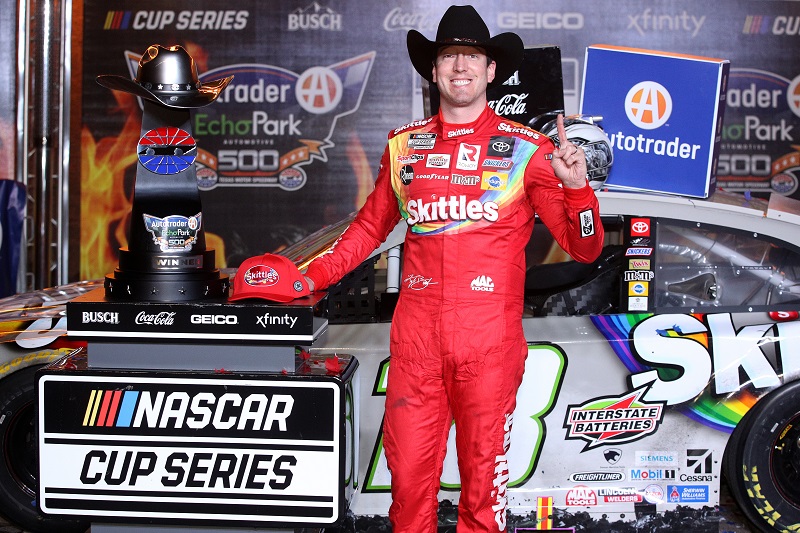 The NASCAR Cup Series‘ second race of the Round of 8 was plagued by rain throughout the week, forcing multiple postponements before the weather finally subsided on Wednesday. When the field finally left Fort Worth, Kyle Busch was a satisfied man as the reigning champion finally scored his first victory of 2020.

Kevin Harvick and Kansas winner Joey Logano started on the front row. Daniel Suárez, Garrett Smithley, and MBM Motorsports‘ Timmy Hill and Chad Finchum were sent to the rear for unapproved adjustments. Martin Truex Jr. took a severe hit when he was also slapped with a twenty-point penalty and crew chief James Small was ejected after his car’s spoiler was confiscated by officials; Truex had also been relegated to the back the previous week, but this penalty dropped him further below the cut line.

The first caution came out after five laps when Chris Buescher hit the turn two wall. At the time of the yellow, Truex had moved into twenty-fifth.

Harvick continued to lead until another caution came out on lap 22 for J.J. Yeley hitting the wall and destroying his rear end. The yellow, which served as the competition caution, saw Harvick and the leaders stay out. Busch suffered a speeding penalty on his stop.

Harvick and Alex Bowman led the field to the restart on lap 28, though mist on the track resulted in the former hitting the wall in turn two. The moisture at the speedway eventually picked up into rain, resulting in a caution on lap 43 followed by a red flag nine laps later.

Although NASCAR hoped to wait out the weather since TMS has lights, Mother Nature refused to comply and the race was moved to Monday morning. Further delays took place that pushed it all the way to Wednesday. The red flag lasted approximately 72 hours, 28 minutes, and 34 seconds, making it one of the longest race stoppages in NASCAR history (though it does not surpass others like the 1973 Southeastern 500 at Bristol, which was delayed by two weeks).

The race finally resumed on lap 57 as Bowyer continued to lead. After just four laps, the race was stopped yet again when Denny Hamlin made contact with Matt Kenseth, who wrecked with Bubba Wallace on the frontstretch and ending their days.

Bowyer remained in front for the restart and continued to lead to the end of the stage. Truex completed his surge to finish second, followed by Erik Jones, Ryan Blaney, Jimmie Johnson, William Byron, Chase Elliott, Logano, Austin Dillon, and Matt DiBenedetto.

The second stage ran relatively clean as the lone caution came on lap 135 for a spin by Joey Gase.

At the front, Bowman took the lead between stages and led until the Gase incident, with Truex leading the field to the restart on lap 139 before losing the spot to Blaney. The two would trade the position throughout the segment before green-flag stops began with the race crossing the 200-lap mark.

Once the pit cycle was completed with Jones hitting pit road, Busch was back in front and drove off to the stage win. Truex, Bowman, Keselowski, Blaney, Christopher Bell, Dillon, Bowyer, Ricky Stenhouse Jr., and Harvick rounded out the top ten.

Busch stayed out between stages and led the field to the green alongside Bowyer.

As the stage wore on, attrition became a potential concern with Harvick reporting tyre concerns and drivers began watching their fuel mileage. Green-flag stops resulted in Busch surrendering the lead to Truex after 50 laps, during which the former reported smoke in the car from rubber fire.

Johnson exited the race on lap 279 with an engine failure.

At the front, Bowyer took the lead but continued to keep an eye on fuel conservation. He ultimately surrendered his lead on lap 283 to Busch, who faced opposition from Truex and Bell.

Busch would ultimately hold off his JGR team-mate and ally to score his fifty-seventh Cup win, first of 2020, and fourth at Texas. The victory also extended his streak of consecutive seasons with at least one win to sixteen. He is also the first non-playoff driver to play spoiler since Kenseth won at Phoenix in 2017 (incidentally, also in a JGR car). Busch had been eliminated after the Round of 12.

Unfortunately for Busch’s team-mate Truex, the spoiler ultimately places him in jeopardy of missing the Championship Round. Entering Sunday’s race at Martinsville, he is seventh in the standings and 36 points below the cut-off line, effectively making a victory at the short track a must. On the other hand, Truex has won the last two races at Martinsville in dominating fashion.

“We’ve got to work hard this week to make sure we’re prepared,” he said in a post-race conference. “I know the guys have already been doing that. So definitely optimistic. It’s a good track for us, but it’s a short track and a lot can happen on restarts and things.”

By Justin Nguyen
1 Mins read
Joe Gibbs Racing has switched around their crew chief/driver lineup for 2021, with Kyle Busch’s crew chief Adam Stevens joining Christopher Bell, while Busch will work with Ben Beshore. Jason Ratliff and Dave Rogers will move down to the Xfinity level, while Chris Gayle will lead the multi-driver #54 team.
NASCAR Cup Series

By Justin Nguyen
2 Mins read
Driver eligibility has been revealed for the 2021 Busch Clash on the Daytona road course, including former race winners, playoff drivers and stage winners in 2020, and Daytona 500 winners. 24 drivers are eligible to compete.