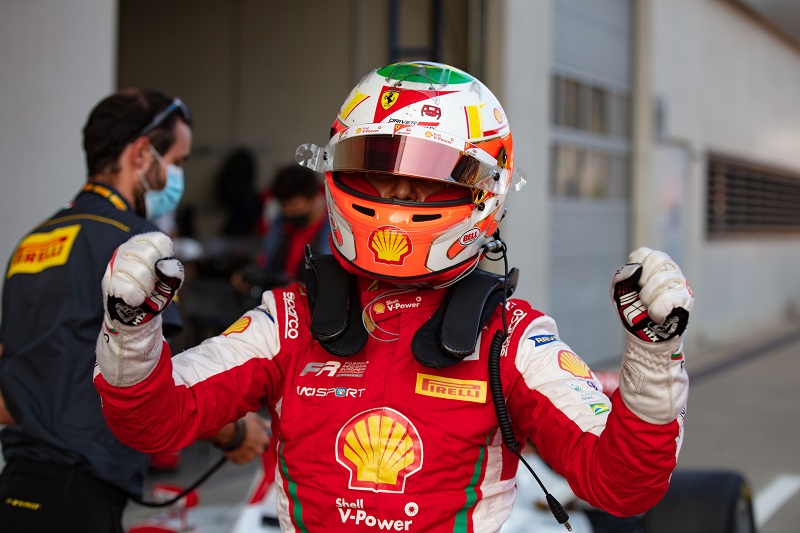 Gianluca Petecof came out on top of a titanic battle between himself and Prema Powerteam team-mates Arthur Leclerc and Oliver Rasmussen to become the 2020 champion of the Formula Regional European Championship.

In a year when it didn’t appear Petecof would last the season due to financial constraints, the Brazilian did make it to the end, and a fifth-place finish in the final race of the season was enough for him to take the title as Leclerc was forced to retire.  Rasmussen’s challenge ended when the penultimate race of the year was cancelled due to the weather.

The calendar for the 2020 Formula Regional European Championship season was announced in September 2019, but the outbreak of the coronavirus early in 2020 forced it to be rejigged.  It wasn’t until August that the season finally got underway at the Misano World Circuit Marco Simoncelli.

Van Amersfoort Racing were expected to be Prema’s main opposition, although only Pierre-Louis Chovet raced in every event.  Alessandro Famularo was set to race in the second car from the start but it was not until the third round before the Venezuelan appeared, and he was gone again after just three events.  Red Bull Junior Dennis Hauger took over for the final three rounds, while the second round of the year saw a surprise return to racing for Facu Regalia.

KIC Motorsport also went into the year with high hopes as Finnish duo Patrik Pasma and Konsta Lappalainen were joined by another Red Bull Junior in Jüri Vips.  However, the coronavirus affected Vips’ participation – as did being called up to race in FIA Formula 2 – limiting him to just three outings, while both Nico Göhler and Nicola Marinangeli joined the field for two races each.

DR Formula RP Motorsport fielded Italian racer Emidio Pesce for the whole season, while they gave a one-off outing to Guatemalan racer Ian Rodriguez in the penultimate round at the Autodromo Internazionale Enzo e Dino Ferrari.

There were also one-car entrants from Gillian Track Events GTE for Gillian Henrion, and for Monolite Racing, the latter fielding Andrea Cola for six of the eight rounds and Matteo Nannini for round six at the Circuit de Barcelona-Catalunya.

Over three months after its original scheduled start date, the season finally got underway at the beginning of August at Misano, and it was not long until the defending Teams’ champions where showing their dominance.

Leclerc secured all three pole positions at Misano but was only able to convert one of those into victory, with Rasmussen taking the first win of the year as the Monegasque racer was forced to retire, with Pasma securing second place ahead of Chadwick.  It would turn out to be Chadwick’s one and only trip to the podium in 2020.

Race two saw Leclerc take the honours, with Petecof second and Rasmussen third to complete an all-Prema top three.  Petecof ensured Prema left Misano with an unbroken record of victories by winning race three, with Leclerc and Rasmussen again on the podium.

The championship moved on to the Circuit Paul Ricard for round two, but it would be more of the same for Prema, with three more victories coming their way.  Two of those – races one and three – went the way of Leclerc, while Petecof took the other win.

Rasmussen was conspicuous by his absence from the podium as he could only take a best of fourth across the weekend as Chovet, Vips and Vips again took the final spots on the podium across the three races as Leclerc and Petecof locked out the top two places.

Regalia’s first track action for a number of years saw the Argentine driver take a pair of seventh places and an eighth, although as a guest driver, he was ineligible to score points.  It was an impressive display non-the-less.

Petecof took the first win of the Red Bull Ring weekend as Prema once again locked out the top three places, with the Brazilian leading home Leclerc and Rasmussen.  Rasmussen was forced to defend from Pasma and Chovet for third, but the top two were in a race of their own up front.

Rasmussen took his second win of the season in race two, with Petecof and Leclerc again joining him on the podium for a Prema lock-out, and it was a similar story in race three, with Petecof victorious ahead of Leclerc and Rasmussen.

The championship then moved on to the Autodromo Internazionale del Mugello in Italy, and it was Leclerc who was the undoubted star of the weekend by taking all three victories.  Although he would need to work hard for each of them in very different ways.

Leclerc was handed a ten-second penalty in race one for passing Rasmussen under yellow flags, but the Monegasque racer was sublime thereafter to win by more than twenty seconds from Vips, with Rasmussen denying Petecof the final place on the podium.

In a race of mixed conditions in race two, Leclerc once again took the victory despite pitting twice – once for dry tyres and then again for wets as the heavens opened, with Chovet taking second ahead of Petecof.  At one point, it looked as though Henrion was on course at least a podium, but the Frenchman was denied by a safety car caused by Cola spinning off.

Leclerc took a more straightforward victory in race three as he led home another Prema one-two-three, with Petecof second ahead of Rasmussen.  Bizarrely this was the final Prema lock-out of the season, and even stranger was that neither Petecof nor Leclerc would win another race in 2020.

Having won every race of the season heading to the Autodromo Nazionale Monza, Prema Powerteam were expected to dominate at the Temple of Speed, but it was not to be as KIC Motorsport took their first win of the year in race one.

Pasma took pole position and then fought off the challenge of Petecof to claim his first win of the season, with Leclerc completing the podium places ahead of Rasmussen.  Rasmussen took his third win of the year in race two, beating Lappalainen and Chovet as Leclerc’s race was ended by a mechanical failure.

Pasma was back to winning ways in race three, taking the chequered flag ahead of Petecof and Lappalainen as Leclerc struggled once more, fading from pole position to sixth.

Rasmussen was the man in form at the Circuit de Barcelona-Catalunya by taking the first two wins of the weekend, the first ahead of Leclerc and series debutant Hauger, while the Norwegian went one better in race two to finish second ahead of Chovet.

Chovet finally took his and Van Amersfoort Racing’s first victory of the year in race three ahead of team-mate Hauger, the Norwegian showing good pace on his first appearance of the season.  Importantly, completing the podium was Petecof, with the Brazilian denying Leclerc the position.

As much as Barcelona was Rasmussen’s weekend and one that brought him back into the title picture, the penultimate round at the Autodromo Internazionale Enzo e Dino Ferrari was anything but, as a mechanical issue prevented him from starting race one having secured pole position.  It wouldn’t get much better for the Dane as he could only finish sixth in the other two races.

Rodriguez, making his debut in the category, surprised many by taking the win in race one, giving DR Formula RP Motorsport their one and only victory of the season, with Hauger again second ahead of Leclerc.

Heading to the season finale at the Autodromo Vallelunga, the title battle was to be fought between the Prema drivers, but race one went the way of Red Bull Junior Hauger for his first and only win of the season.  He was joined on the podium by Pasma and Rasmussen.

Rasmussen’s title challenge ended however without him turning another wheel, as persistent rain cancelled the penultimate race of the season, leaving the title battle a straight fight between Petecof and Leclerc.  Just six points separated the team-mates heading into the final race of the year, but a fifth place finish was enough for the Brazilian to clinch the title as more mechanical woes ended Leclerc’s day.

Rasmussen took the victory ahead of Hauger, with Chovet completing the podium.

Gianluca Petecof won four of the first nine races but did not win again after the trip to the Red Bull Ring, but the Brazilian was the more consistent of the Prema trio and was crowned champion on three hundred and fifty-nine points.

Petecof ended just sixteen points ahead of Leclerc and Rasmussen, who tied on three hundred and forty-three points, with the Monegasque finishing ahead on countback.  Petecof was also crowned the rookie champion ahead of Rasmussen and Leclerc.

Prema dominated the Teams’ Championship with eight hundred and forty-two points, well clear of KIC Motorsport’s four hundred and ninety-five, but four wins for Pasma, two for Van Amersfoort Racings (one each for Chovet and Hauger) and one for Ian Rodriguez of DR Formula RP Motorsport ensured it was not all just about Prema.

The championship in 2021 merges with Formula Renault Eurocup to become Formula Regional European Championship by Alpine.  With fields of around eleven cars throughout 2020, the merger cannot come at a better time for a championship that showed that even with a limited field, it could provide good action.  It can only be better with more cars… surely?

The Rising Star of Dino Beganovic - Sweden's Next Formula 1 Superstar?

Brilliant Beganovic Dominates in Monaco for Third FRECA Victory of 2022

By Paul Hensby
1 Mins read
Hadrien David came close to winning in Monaco back in 2021, and he was happy to finally take victory in the principality in the first race of the 2022 weekend there.