Dakar 2021 Daily Round up: Prologue 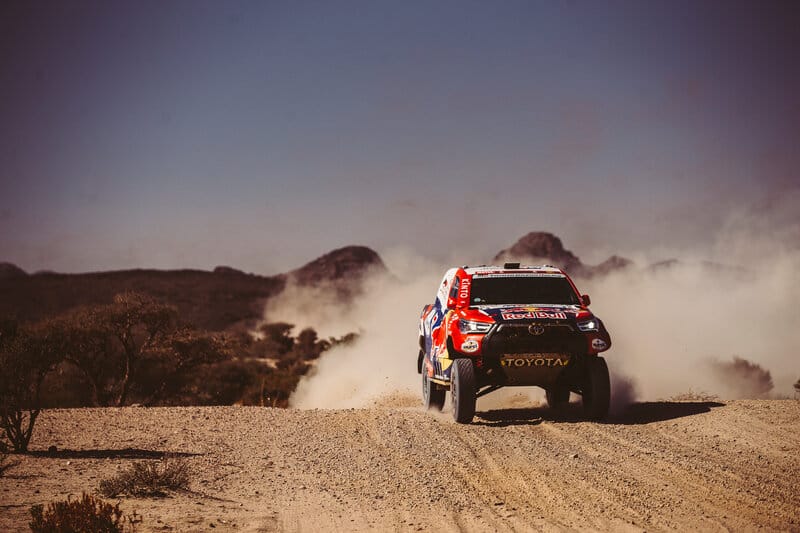 It was thirty miles outside of Jeddah, Saudi Arabia, where the 2021 Dakar Rally began with the eleven kilometre special stage deciding the running order of the 286 vehicles contesting in this year’s rally raid.

Favourites for the overall 2021 title in the cars are Dakar veteran Stephane Peterhansel, four-time victor Carlos Sainz and three-time winner Nasser Al-Attiyah. Peterhansel, looking to add his fourteenth victory to his tally after covering 8,000 competitive kilometres of rally.

The top car in the prologue was Al-Attiyah and his Toyota Gazoo Racing Hilux, co-piloted by co-pilot Matthieu Baumel, with a time of 00:05:48s. Having taken the top spot in the car category, Al-Attiyah levelled rival Sainz’s record of Dakar stage wins of 36.

Sitting behind Al-Attiyah and Baumel was the South African driver team of Brian Baragwanath and Taye Perry of Century Racing. Baragwanath is contesting the 2021 Dakar in a CR6 which he has spent the past year developing. Perry may be a familiar name, the promising youngster completed his first Dakar in 2020 in the bike category, but has made a move to co-pilot for his fellow countryman Baragwanath. The pair matched Al-Attiyah’s time which will see them run second in their category when the route kicks off tomorrow.

Favourites, Peterhansel and Sainz, could only muster the fourteenth and 28th fastest times respectively, through the prologue special stage in the X-Raid John Cooper Works Mini Buggy. Sainz had suffered a slow puncture over the course of the prologue which affected his performance over the timed section.

Nine-time World Rally Champion Sebastien Loeb and co-driver Daniel Elena were tenth fastest through the prologue in tenth place. This will be the fifth time the duo has contested the Dakar, this year they will be contesting the raid with famous rally specialists Prodrive under the Bahrain Raid Xtreme banner.

American, Ricky Brabec recorded the fastest overall time over the special stage. Brabec recorded 6 minutes 31 seconds over the eleven kilometre test on his Honda CRF 450 Rally bike. Brabec’s Monster Energy Honda Team mate Joan Barreda Bort finished the prologue stage six seconds adrift. Brabec will be first on the road tomorrow – with no lines to follow, it will be a test for the No1 bike.

Sam Sunderland posted the 26th fastest time in the bike category through the prologue, which left the Brit 54 seconds adrift of the lead time.

Britain’s Kris Meeke topped the Lightweight Vehicle class in his PH-Sport Zephyr Buggy. Meeke recorded a time of 6:40s with Seth Quintero a close two seconds behind. The quickest SSV was the USA’s Austin Jones.

The Truck class was headed by Siarhei Viazovich, with the Belarusian posting a time of 6:38s.

The prologue welcomed the inaugural running of the Dakar Classic, with the 1984 winner, the Porsche 911 of René Metge contesting over 30 years later.

The first stage will take competitors from the coastal city of Jeddah, in the west, to Bisha in the south-west of Saudi Arabia.

By Melissa Chappelhow
4 Mins read
Al Rajhi takes the stage win as Peterhansel and Al-Attiyah battle it out for the overall honours.
Dakar