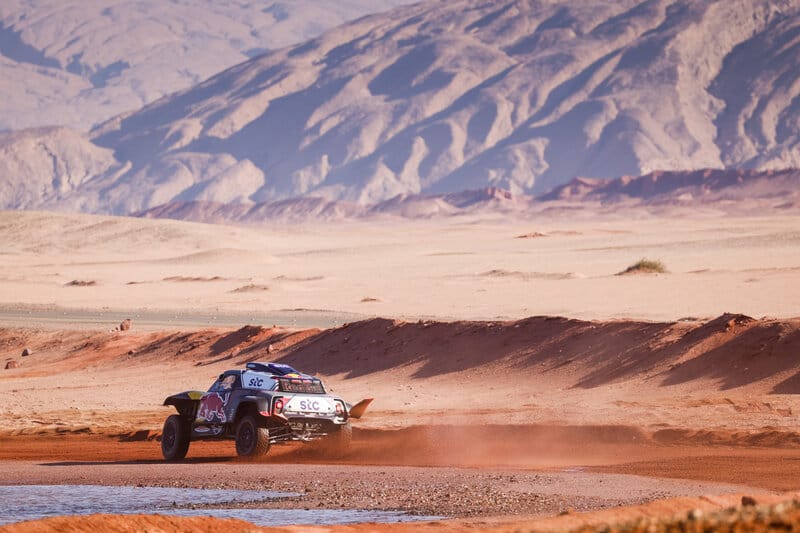 Today’s stage sees the Dakar competitors head to the Red Sea coast for a loop that starts and ends in Neom. A real picturesque spectacle, but a tough test for the drivers and riders, with top athletes losing precious time with more navigational difficulties and others, like Toby Price, suffering at the hands of the terrain putting a stop to their 2021 campaigns.

Stephane Peterhansel won his first stage of this year’s Dakar, to maintain his lead at the top of the general rankings, where he has sat since day two of the rally.

Peterhansel had a previous speeding penalty rescinded going into today’s stage, which meant he had gained an extra minute at the top of the table. Peterhansel took advantage of the troubles faced by his rivals Nasser Al-Attiyah and Carlos Sainz through the 465km special stage, to cautiously stay out front and win by over ten minutes.

Sainz was also a victim of punctures, after gaining one in the early stages of the stage. Not only did the X Raid Mini JCW Team driver lose time over the puncture, there was an issue with the brakes of his Mini Buggy, which left the brakes completely drained of fluid. Stopping on-stage to remedy the issue didn’t entirely fix the problem so Sainz finished the stage down in eleventh place but was fortunately able to retain his third place in the overall standings.

Just outside the podium spot, Yazeed Al Rajhi, claimed fourth place, 25 seconds down on De Villiers even though the Saudi had to perform a pit stop on-stage to repair a puncture.

That was where the good fortunes ended with the top riders with Joan Barreda losing fourteen-and-a-half minutes after straying off course and a number of others’ 2021 campaigns coming to a crashing halt on stage.

Ross Branch’s race ended after the Monster Energy Yamaha Rally Team rider’s engine broke in the early part of the stage. Branch was thirteenth overall coming into today’s stage, making his withdrawal a huge blow for the Yamaha team as he was their top rider.

After impressing with his fortitude through the ‘marathon stage’, after riding with cable ties and tape holding his rear tyre together, Toby Price’s Dakar came to a catastrophic end at the 155 kilometre mark. The Australian crashed out, suffering injuries to his left hand side. Several riders including Brabec and Sunderland, stopped on stage to assist while they waited for air assistance to take Price to hospital for treatment.

For the other Benavides, Luciano, it was curtains for him as his stint ended at the 242 kilometre point. Benavides crashed out injuring his shoulder.

In the lightweights, the competition is hotting up as the title is anyone’s game after there being three different overall leaders over the past four days. Francisco Lopez won the ninth stage of the competition placing him at the top of the leaderboard with a twelve minute advantage over Austin Jones in second place.

Jones had started the day nine minutes up on, then second-placed Seth Quintero, but the Monster Energy Can-Am driver lost time in the middle of the stage. Quintero on the other hand suffered gearbox issues rendering the 24-year-old unable to complete the stage, meaning he is now out of contention for the overall category win, with only three stages of the competition remaining.

Kris Meeke had started to make ground, having been sitting last overall due to a bout of bad luck. The Brit had made a great start on the stage, but breaking a hub on his PH Sport Zephyr buggy, left him stranded in the middle of the desert after being unable to fix the issue.

Kamaz lost their run of 1-2-3 stage topping results with Anton Shibalov lost four minutes over the stage, having won yesterday’s he was starting at the front with his Kamaz crew. Shibalov finished the stage with the fifth fastest time. Teammate Dmitry Sotnikov caught up and was able to overtake his teammate to claim third on the stage.

Aliaksei Vishneuski led the stage through the first 200km until his Maz Sport Auto suffered a puncture. The Belarusian finished 25 minutes down on the leader Macik.

The top three positions in the class remain unchanged with Sotnikov still heading up the proceedings going into stage ten.