Mike Marlar to run Bristol dirt in Cup and Trucks for MBM, Hill 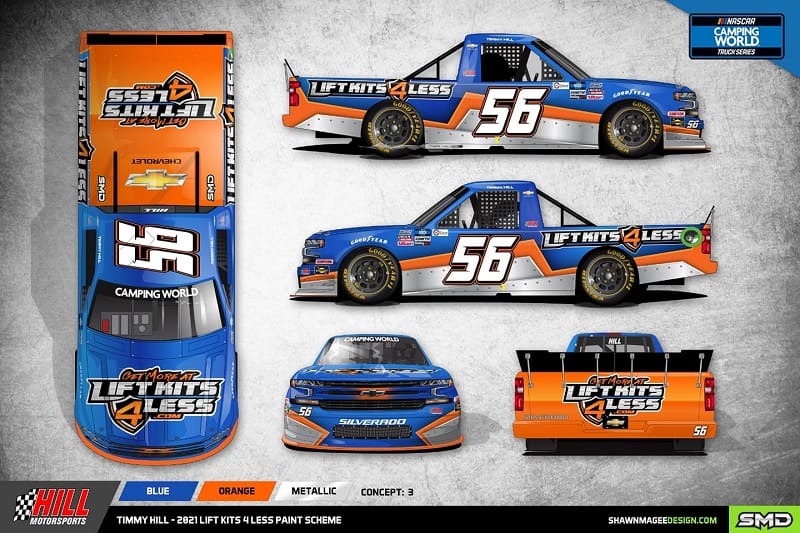 When the NASCAR Cup and Camping World Truck Series hit the dirt at Bristol Motor Speedway for the first time in late March, Mike Marlar will get a chance to run both. On Monday evening, MBM Motorsports and Hill Motorsports announced Marlar will respectively run the Cup and Truck Bristol races for them. Marlar will drive the #56 Chevrolet Silverado for Hill in the Saturday Truck event, followed by making his premier series début the next day in MBM’s #66.

“This is going to be interesting and I’m really looking forward to the challenge,” Marlar said in a release from MBM. “This is something that would not have been possible without the help of (MBM owner) Carl Long and Rocky and Tom Smith from Smithbuilt Homes. This is such a cool opportunity for me being a dirt racer from Eastern Tennessee being able to compete in the top series of NASCAR at Bristol.”

The 2018 World of Outlaws Late Model Series champion, Marlar made his NASCAR début in the 2019 Truck event at Eldora Speedway—then the only dirt track in NASCAR—for Reaume Brothers Racing. He finished the race in fourth for what remains RBR’s best finish and lone top five to date.

Later in the year, he joined MBM for the Xfinity Series race at Richmond, though his day ended with a crash on the opening lap. While the race did not go as hoped, he continued dabbling in pavement racing such as Super Late Models.

Otherwise, his specialty remained on dirt. In 2020, he finished twentieth in the Lucas Oil Late Model Dirt Series standings with a win at Florence Speedway. After nine races into the 2021 season, he sits eighth in points with two top-five finishes and four top tens.

While MBM is primarily a Toyota and Ford team while Hill fields Chevrolets, the latter’s owner Timmy Hill races for MBM in the Xfinity and Cup Series. At the Cup level, Hill’s best finish for the team is twenty-ninth on the Daytona road course after the first five races. While Hill has served as the team’s primary Cup driver since they began racing in the series in 2017, other drivers have occasionally made starts for them as well, such as Garrett Smithley attempting the Daytona 500 in the #13.

“I am excited to have Mike in our car again, he is a champion dirt driver being paired with (crew chief) Clinton Cram, I will be one of many people excited to watch this duo go to work,” Long said. “We like being underrated and hope to surprise a lot of people.”

MBM’s Xfinity side operates the #13, #61, and #66. MBM’s press release also mentions “rookie driver” Matt Jaskol as part of the lineup, though specifics such as a schedule and car number were not given. Jaskol is a kart racer who has spent time in the Red Bull Junior Team, won the 2005 ASA Speed Truck Challenge championship, and was a cast member on the television show Castaways.

Founded in 2019, Hill Motorsports’ #56 is mainly shared by Hill and his younger brother Tyler; the former scored a ninth-place finish at the Daytona RC in February. Gus Dean drove the #56 in the opener on Daytona’s oval. It is not immediately known if Marlar will also run the Truck Series’ other dirt event at Knoxville Raceway in July.

“This is a very unique opportunity to tie our truck program with Hill Motorsports along with MBM Motorsports with the Xfinity and Cup programs together,” Hill commented. “I am looking forward to our first event with LiftKits4less.com with Mike Marlar in our #56 truck at Bristol! Mike has impressed me in so many ways and I am looking forward to seeing him tackle this new race track! My favorite tracks are coming up during this early summer stretch and we are going to have some exciting finishes with LiftKits4Less.com on board!”

By Justin Nguyen
1 Mins read
After making his NASCAR Truck Series début at Gateway in June, Mason Maggio returns to the series at Richmond where he will drive for Peck Motorsports.
NASCAR Cup Series