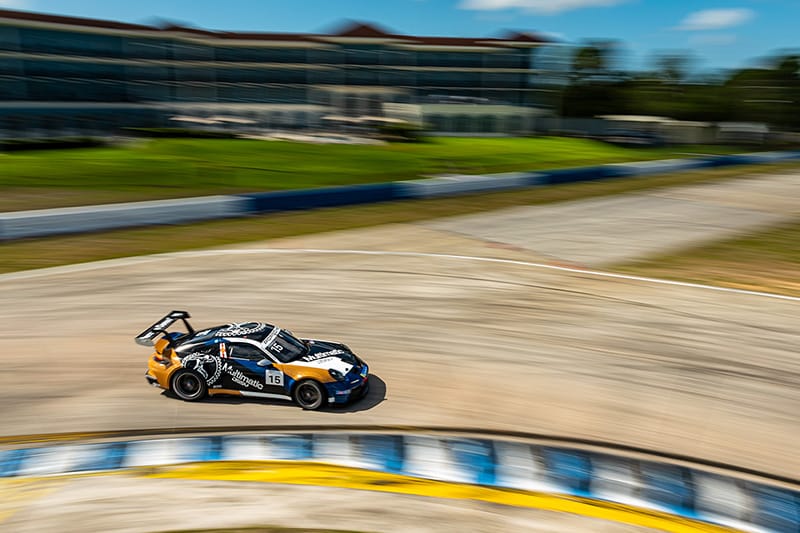 Sebastian Priaulx finished the second day of testing for the new Porsche Carrera Cup North America at the top of the timesheets, making a clean sweep of all four sessions over the two days of testing at Sebring International Raceway.

The Guernsey driver heads in to the new season as a championship favourite after showing fantastic pace. While he was unable to beat the time that he set on the opening day he ended the sessions 0.509 seconds ahead of Kelly-Moss Racing team-mate Kay van Berlo with a time of 2:00.870.

Leh Keen rounded out the top three places in the Pro class for 311RS Motorsport as championship competitors got their first taste of the new 992 based Porsche 911 GT3 Cup car, marking the first official running in the world of the cars by customers.

Alan Metni claimed the fastest time of the Pro-Am competitors in the iFLY Racing/Kelly-Moss Cup car with a time of 2:03.078. Efrin Castro for Team Hardpoint EBM was second fastest in class and John Goetz for Wright Motorsports was third fastest.

Joining the Pro and Pro-Am classes on track this year is the Pro-Am 991 class which features the previous generation of the Porsche GT3 Cup car. Matt Halcome took his Goldcrest car to the top of the timing sheet to claim the fastest time in class with a lap of 2:05.214. Goldcrest team-mate Jeff Majkrzak finished in second place while Frank Raso rounded out the top 3 times for Topp Racing.

Competitors will continue to take part in various tests around the US ahead of the new season which begins on 17-20 March at Sebring International Raceway before visiting Canadian Tire Motorsport Park, Watkins Glen International, Toronto Indy, Road America, VIRginia International Raceway, Michelin Raceway Road Atlanta and another yet to be confirmed circuit.

WATCH: Behind the scenes with 311RS Motorsport shakedown of the new Porsche 911 GT3 Cup Car

By Vince Pettit
1 Mins read
Behind the scenes action courtesy of 311RS motorsport as they get their hands on the new Porsche 911 GT3 Cup Car at Sebring.