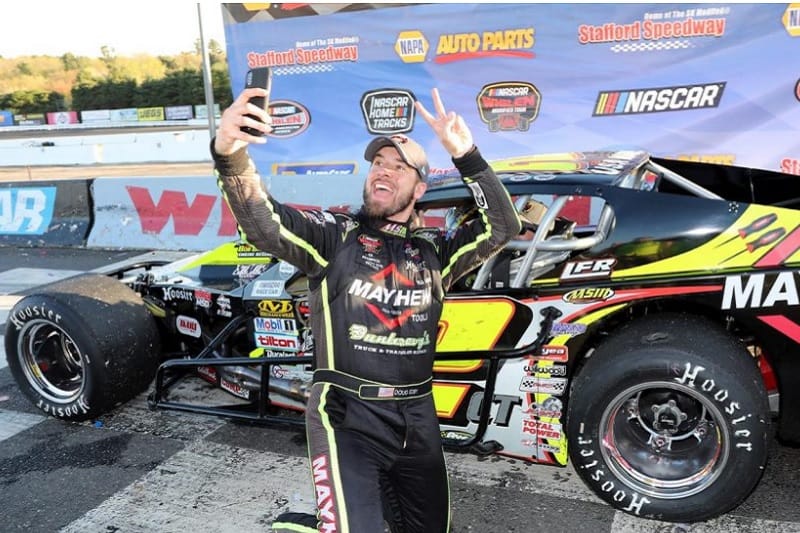 When the inaugural Superstar Racing Experience (SRX) season begins this summer, the ten full-time drivers will face competition from track stars looking to defend their home turf. On Friday, the series announced four drivers who have won championships at the first five tracks on the SRX schedule who will run a special one-off vehicle.

For the season opener at Stafford Motor Speedway on 12 June, Doug Coby will drive the local champion’s car. Coby is the most decorated active driver in the NASCAR Whelen Modified Tour, having won six championships with the most recent coming in 2019. The Connecticut native made his Modified début at Stafford in 2002, and he currently has twelve career victories at the half-mile track.

Coby tweeted after the reveal, “Thankful and excited to be a part of this select group of drivers to participate in @SRXracing at @StaffordSpeedwy this June 12! Reppin the short trackers to show these guys how we roll!”

Brian Brown will represent Knoxville Raceway when SRX comes to town on 19 June. He has fifty-two feature victories and four championships in the dirt track’s 410 sprint car class, the latter of which includes the last two titles. Brown has also enjoyed great success in the track’s 360 division.

“Honored to have this opportunity to compete with all these great drivers,” Brown tweeted. “Looking forward to representing @knoxvilleraces and all of their great fan base. Thanks again to @SRXracing for asking me to be involved.”

The series’ second dirt race at Eldora Speedway on 26 June will feature Kody Swanson. He is a five-time champion and the winningest driver in the USAC Silver Crown, the highest division of the United States Auto Club. In 2020, Swanson expanded his résumé to include the Indy Pro 2000 Championship, where he won in his début, and the ARCA Menards Series, finishing eighth in his maiden start.

“It has been exciting to see what SRX Racing has developed for this year,” posted Swanson. “They have formed such an incredible group with their staff & drivers, and I’m grateful to have been included. I’m really looking forward to the chance to race with them, and thankful for the opportunity!”

The Lucas Oil Raceway round on 3 July has Bobby Santos III in the hometown car. While Santos has raced in a variety of series including the NASCAR Xfinity and Camping World Truck Series, much of his success comes in USAC and the Modified Tour. In the latter, he won the 2010 title and has nineteen career victories. He has nine USAC victories at the Indiana-based Lucas Oil Raceway, including two Night Before the 500 wins.

“Thankful for the invite and the opportunity to get to race with SRX Racing Series at Lucas Oil Raceway! Looking forward to racing against all these great drivers,” wrote Santos.

The fifth race, at Slinger Speedway on 10 July, does not have a set driver as an invitation will instead be extended to whoever wins the Slinger Nationals. One of the most prestigious races in short track racing, the Nationals regularly attracts drivers from the NASCAR world; the defending race winner Ty Majeski has Xfinity and Truck Series experience. Matt Kenseth, the 2003 Cup Series champion, is an eight-time Nationals champion.

The SRX season will end at Nashville Fairgrounds Speedway on 17 July, though no special driver was announced.

Although the series referred to the group as “Amateur All Stars”, the name was derided by fans due to its implication that the drivers were not professionals. Later in the day, the series’ Twitter account opened a poll to allow fans to select a new name between “Hometown Heroes”, “Local Legends”, and “Short Track Stars”. Prior to Friday’s news, the car was nicknamed the “(Rocky) Balboa car”.

Reports have also indicated the series will provide a second multi-driver car for big names. Ex-F1 driver Mark Webber was initially one of the full-time drivers but dropped out due to COVID-19 travel restrictions.

By Justin Nguyen
2 Mins read
The Netherlands-based Studio 397, developer of rFactor 2, has been acquired by Motorsport Games. rFactor’s physics engine will be utilised in the new NASCAR franchise.
NASCAR

By Justin Nguyen
2 Mins read
NASCAR and Satisfi Labs are collaborating to develop and launch the Answer Engine, a virtual assistant that willl provide help and information for fans at various tracks.