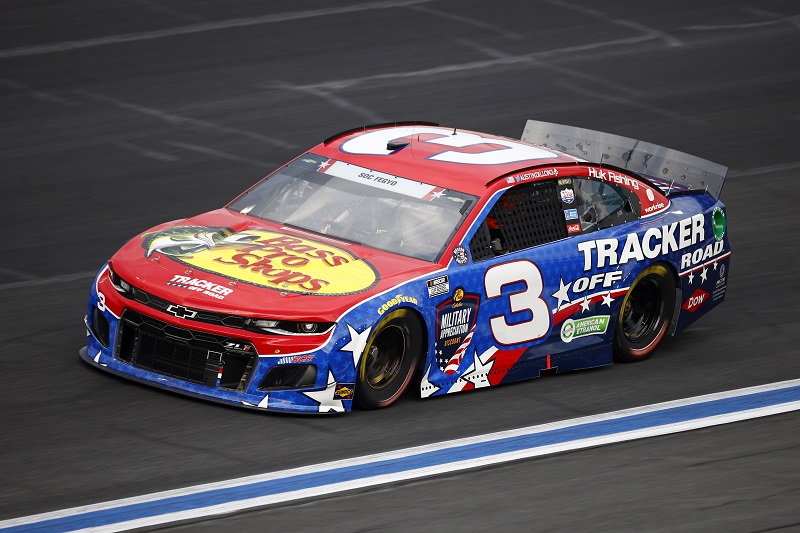 Friday’s NASCAR track activity at Charlotte Motor Speedway featured some rain as the Cup, Xfinity, and Camping World Truck Series conducted practices. The weather reached the point where the Trucks’ qualifying session was cancelled, resulting in the night’s North Carolina Education Lottery 200 having the starting grid set by formula.

Despite the wet conditions, Austin Hill showed speed as he was the fastest in Truck practice. Riley Herbst did the same for the Xfinity Series while Austin Dillon led Cup practice. It is the fourth practice session of the year and second in a row after doing so at COTA last week.

Dillon, the 2017 Coca-Cola 600 winner, set a fastest practice speed of 180.935 mph, beating out a trio of Chevrolets in Alex Bowman, Kyle Larson, and Erik Jones. Qualifying will take place on Sunday before the 600. The field of thirty-eight is mostly the same with the exception of B.J. McLeod (thirty-second) returning to his #78 Live Fast Motorsports car that road ringer Kyle Tilley drove at COTA, David Starr (thirty-eighth) running his first Cup race of the year in MBM Motorsports‘s #66, and Cody Ware (thirty-third) and Garrett Smithley (thirty-fifth) in the #53 and #51 for Rick Ware Racing, respectively. Ware is normally the #51’s driver but had not expected to run the 600, instead hoping to enter the Indianapolis 500 before the plan fell through due to sponsorship troubles; he replaces the original replacement J.J. Yeley.

The Xfinity practice was delayed by twenty minutes due to rain. When it finally took place, Herbst led the way at 178.436 mph ahead of Daniel Hemric.

“I’ve been looking forward to this practice since probably Atlanta, just working with a new team and want as much experience with them and Richard (Boswell, crew chief) as possible and really glad the rain stayed away, and were able to put some quick lap times down and have a good Ford Mustang,” Herbst said afterwards.

Forty-three drivers are entered for Saturday’s Alsco Uniforms 300, and qualifying means all but seven will race. Driver changes include Ty Gibbs (fourth) in the Joe Gibbs Racing #54 that Kyle Busch drove to vctory at COTA, Chase Briscoe (seventh) in B.J. McLeod Motorsports‘s #99 that Ryan Ellis ran, Dillon Bassett (eighth) taking over for Austin Dillon in Bassett Racing‘s #77, Ty Dillon (tenth) in the #23 for Our Motorsports, Josh Berry (twenty-first) returning to the #8 of JR Motorsports, Joe Graf Jr. (twenty-sixth) in his #07 SS-Green Light Racing machine after missing COTA due to injury and team-mate Ware (thirty-sixth) in the #17 rather than Cole Custer, Matt Mills (thirty-fifth) back in the BJMM #5 that Kevin Harvick drove, Ryan Vargas (thirty-seventh) returning to his JD Motorsports #4 after being replaced by Spencer Pumpelly, Chad Finchum (fortieth) in Boris Said‘s place in MBM’s #13, and Brandon Gdovic (forty-third) over Kris Wright in Sam Hunt Racing‘s #26. Stefan Parsons was twenty-ninth in BJMM’s first race with the #76.

Interestingly, the return of Gibbs, Berry, and Vargas mean Saturday’s race will have every 2021 Rookie of the Year contender after COTA featured none.

The Truck practice was reduced from its original forty drivers as Ray Ciccarelli had to withdraw his #49 CMI Motorsports entry due to sponsorship issues, while Spencer Davis and his #11 Spencer Davis Motorsports truck was a last-minute exit because of a “private family matter”.