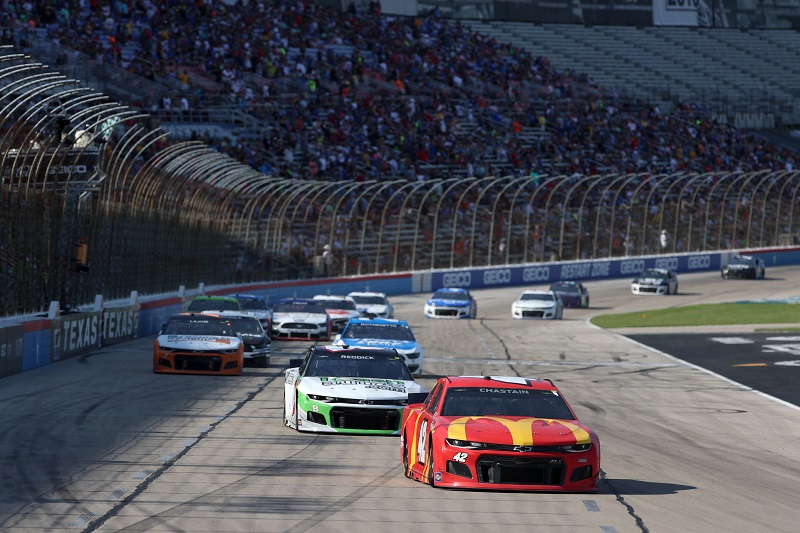 To set the field for Sunday night’s NASCAR All-Star Race at Texas Motor Speedway, twenty-two drivers battled it out in the afternoon’s All-Star Open. Ross Chastain, Tyler Reddick, and Aric Almirola advanced to the main event after finishing first in each of the Open’s three stages, while Matt DiBenedetto qualified by winning the Fan Vote. It is Chastain, Reddick ‘s first appearances in the All-Star Race.

Reddick started on the pole after winning the random draw earlier in the week. Chastain, whose was disqualified from Saturday’s Camping World Truck Series race after failing post-race inspection, suffered more tech-related woes when his car’s aero opening ducts did not meet specifications, resulting in his crew chief Phil Surgen‘s ejection. Austin Cindric and David Starr were also ordered to the rear for failing pre-race inspection twice and unapproved adjustments, respectively, though Starr was already starting last.

Texas native Chris Buescher‘s Open got off to a poor start when he received a pass-through penalty for jumping the green flag. Cindric was penalised for changing lanes before crossing the start line. Multiple spuns took place in the first stage beginning with Bubba Wallace on lap four, followed by Buescher spinning after contact from Ricky Stenhouse Jr. on lap eight. Lap 15 saw Erik Jones go around before being clipped by Daniel Suárez. Chase Briscoe received a speeding penalty before the next restart with two laps to go. Reddick led much of the stage before Chastain completed his ascent through the grid to take the lead on the final lap and win.

“Holy cow, that was a lot of cars,” Chastain said in a Twitter video. “Couple of good restarts, one bad one. Did everything we needed to do.”

Reddick continued to lead as the second stage began. Behind him, a contingent of Fords followed with DiBenedetto, Almirola, and Cindric. Almirola won the battle for second but Reddick led every lap en route to the segment victory.

A ten-lap final stage closed out the Open. Fords occupied the top four with DiBenedetto and Almirola on the front row ahead of Cindric and Buescher, and the top two ran side-by-side for a lap until Almirola cleared him for the lead. Almirola, who has endured a difficult 2021 season that has seen him score just one top ten across sixteen races and sit twenty-eighth in points, finally had something to celebrate as he took the win to punch his ticket into his fourth career All-Star.

“It has been a really tough year and the guys just continue to work their guts out and bring the best cars we can,” said Almirola. “Here at Texas today, we have a really fast car. We took the long way in but I am glad we are racing for a million bucks tonight. I am thankful to all our partners that continue to stick behind us, even through the bad times. […] I am proud to give them something to smile about.”

Despite not winning any of the stages, DiBenedetto won the Fan Vote to qualify for his second straight All-Star.

“Well the bad news. We let you down. The good news is, you didn’t let us down,” tweeted DiBenedetto’s Wood Brothers Racing team. “This is just impossible to believe. Thank you thank thank you. We’ll get there.”

“We struggled a little bit with the car there,” DiBenedetto added. “We will try to work on it. That is really cool. It means a lot to get the votes from the fans. I can’t tell you how much I appreciate that and the opportunity to get into the All-Star Race.”

The four will start at the back for the All-Star Race. Kyle Larson is on the pole.

By Justin Nguyen
1 Mins read
A clerical mistake in which Hendrick Motorsports accidentally allocated one of Chase Elliott’s engines to team-mate Alex Bowman at New Hampshire has resulted in NASCAR penalising both teams with $50,000 fines and 25-point deductions in the standings.
NASCAR Cup Series

By Justin Nguyen
4 Mins read
In a race marred by rain-related chaos at the start and shortened by 10 laps due to darkness, Aric Almirola held off Christopher Bell for his and Stewart-Haas’ first win of 2021 and threw the playoff picture into chaos.