Grégoire Saucy Dominates Again to Win Race One at Zandvoort 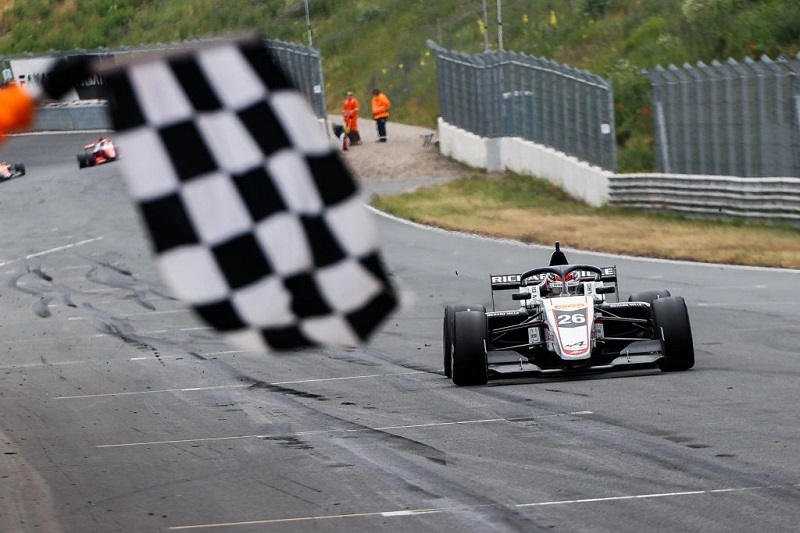 Before 2021, Grégoire Saucy had not won a single-seater car race.  Now, nine races into the Formula Regional European Championship by Alpine season, the Swiss racer has been victorious five times!

The ART Grand Prix driver started the first race of the weekend at Circuit Zandvoort from pole position having once again dominated Qualifying earlier in the day, and Saucy was not to be beaten in the race, despite a late safety car closing up the field.

Saucy was untroubled at the start as team-mate Gabriele Mini defended resolutely from R-ace GP’s Hadrien David, and he was more than two seconds clear after just a couple of laps around the Dutch circuit.

An incident early on at turn eight for JD Motorsport’s Tommy Smith did not require the safety car to be deployed, but with eight minutes on the clock, it was required after KIC Motorsport’s Patrik Pasma crashed out at turn four.

This could have unsettled Saucy, but the Swiss racer was able to run away from the field at the restart and ended more than three-seconds clear of team-mate Mini when the chequered flag flew a few laps later.

Mini withstood almost race-long pressure from David to claim his third podium finish of the season, with David now moving up to second place in the standings as a result of his fourth visit to the podium and the fact that team-mate Zane Maloney could only finish a lowly fifteenth and out of the points.  Unfortunately, Saucy is thirty-nine points clear of the Frenchman.

Paul Aron gave Prema Powerteam a fourth-place finish despite the Estonian having a relatively quiet race, while fifth went the way of Franco Colapinto of MP Motorsport, who finally secured his first points of the season despite having gone into the year as one of the favourites for the title.

Both Colapinto and R-ace GP’s Isack Hadjar managed to find their way passed Van Amersfoort Racing’s Mari Boya after the late race restart, with the Spaniard being forced to settle for seventh, while Prema Powerteam’s Dino Beganovic, G4 Racing’s Michael Belov and Arden’s Alex Quinn completing the top ten and the point’s scorers.

Belov is eligible for points this weekend in Zandvoort having been a guest driver last time out at the Circuit Paul Ricard, and his ninth place gave G4 Racing their first points since joining the series.

Andrea Rosso of FA Racing did not start the race after crashing during Qualifying and damaging his chassis, while Monolite Racing’s Jasin Ferati was another non-starter, with the Swiss racer also having missed Qualifying earlier in the day.

It was not a good day for Monolite Racing as their other driver, Pietro Delli Guanti, was forced to retire early on with a mechanical issue.

The weekend continues on Sunday with another Qualifying session in the morning followed by race two later in the day.  It will be intriguing to see if Saucy’s amazing start to the year continues, or if someone else can deny the Swiss racer a sixth win of the season.

The Rising Star of Dino Beganovic - Sweden's Next Formula 1 Superstar?

Brilliant Beganovic Dominates in Monaco for Third FRECA Victory of 2022

By Paul Hensby
1 Mins read
Hadrien David came close to winning in Monaco back in 2021, and he was happy to finally take victory in the principality in the first race of the 2022 weekend there.