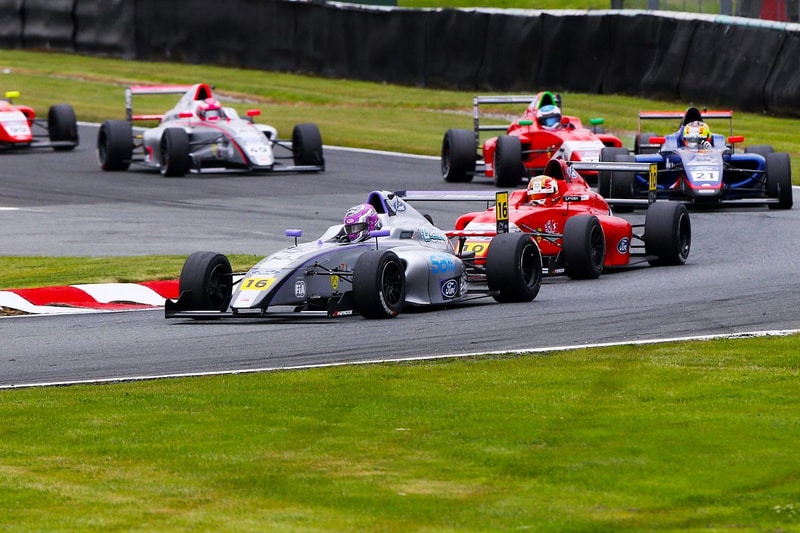 McKenzy Cresswell took his debut British F4 win in the reverse grid race two at Oulton Park on Saturday evening to finally live up to the early promise that the JHR Developments rookie had been showing since the season commenced at Thruxton in May, leading a commanding race to finished five seconds clear of the field after staggering start.

After starting on the third row, it was Cresswell that made the perfect start to quickly dispatch Carlin’s Tasanapol Inthraphuvasak and David Morales in the Arden machine to leave nothing but Thomas Ikin between himself and a maiden winner’s trophy. He would get past the Arden rookie later on in the lap at Island hairpin and would not be matched for the remainder of the race to take his maiden win.

Inthraphuvasak was able to get past Ikin later in the race and annex second place and score his first podium of the season as well as Carlin’s second of the campaign. Ikin had to soak up some late race pressure from the hard charging Abbi Pulling before a battle with herself and Joel Granfors to give Ikin his third podium in successive meetings.

Granfors held on to fourth, his best result since his podiums at Thruxton. Pulling also managed a top five finish, which was a great return after a disappointing result in race one earlier in the day. Oliver Gray finished in sixth and scored yet another rookie podium in the process, with Phinsys by Argenti’s Marcos Flack finishing in seventh.

Zak Taylor finished eighth after being demoted two places from taking a 5-second penalty after exceeding track limits, with Matthew Rees making the most of the title contenders to go from eighteenth to ninth to just miss out on the points but still managed to take a small nibble into Hedley’s title advantage after gaining more positions than him. Eduardo Coseteng came home in tenth for the Argenti squad after another solid run for the Filipino rookie.

Dougie Bolger finished in eleventh, with championship leader James Hedley in twelfth but having his advantage reduced by two points by the virtue of gaining two less places than Matthew Rees in the race. Joseph Loake finished in thirteenth, with Georgi Dimitrov and Aiden Neate finishing just behind in similar increments from the JHR Thruxton winner.

The two other Carlin runners of Roman Bilinski and Kai Askey finished last of the runners in sixteenth and seventeenth, with the former dropping back early on after taking contact from behind earlier in the running. Matias Zagazeta suffered yet another retirement to make it a day to forget for the Peruvian who would’ve been wanting so much more after such a promising Friday.