USF Juniors formed for 2022, first step in Road to Indy 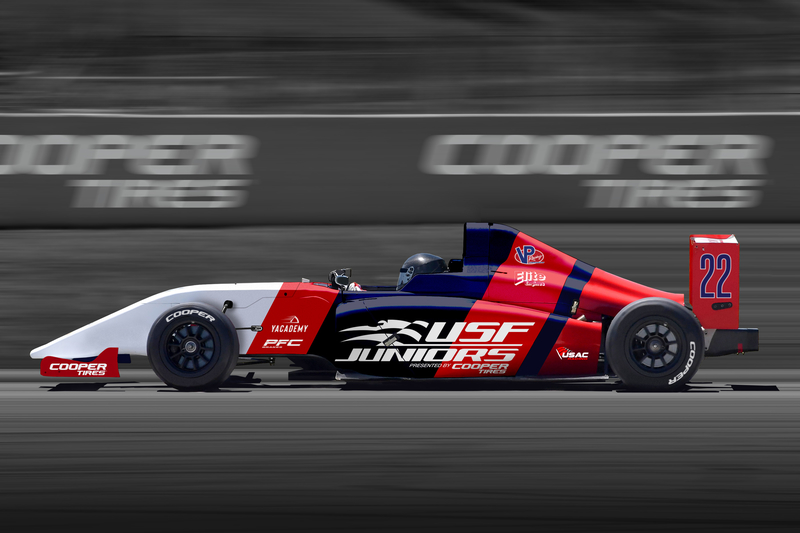 Andersen Promotions has announced the founding of the USF Juniors presented by Cooper Tires, which will begin competition in 2022. The new division will be the first stage on IndyCar’s Road to Indy feeder series pipeline, located below the Cooper Tires USF2000 Championship. Drivers as young as fourteen may compete, and strong performances can be rewarded with a prize of $325,000 and a scholarship worth over $200,000 to graduate to USF2000.

Thursday’s news means there will be five rungs on the Road to Indy. Above the USF Juniors and USF2000 is the Indy Pro 2000 Championship. Success stories from there move up to Indy Lights before reaching the ultimate goal of the NTT IndyCar Series. Andersen Promotions oversees the USF2000 and Indy Pro 2000, and the company was the longtime promoter of Indy Lights before ceding duties to IndyCar for 2022.

“There are numerous routes into the Road to Indy, but it has become apparent that one additional entry level step was needed,” Andersen Promotions head Dan Andersen stated. “Our current first step, the Cooper Tires USF2000 Championship, has become extremely more competitive from a global scale of driving talent than what used to be considered as entry level.

“Our goal with USF Juniors is to provide a true entry level series that is professionally managed where drivers, teams and parents can focus on training and racing via shorter, more economical events, while also lowering the spotlight on young drivers that often occurs on IndyCar race weekends. Our entry level drivers will learn the skills needed for them to move onto the Road to Indy, with less pressure. The new series will be choreographed with our current programmes and tremendous partnership with Cooper Tires. The feedback I have received from team owners has been nothing but positive.”

The Ligier JS chassis will be used with Honda Performance Development engines prepared by Elite Engines, who also builds motors for Indy Pro  2000. The Ligier JS is a Formula 4 single-seater that has also seen use in the Formula 4 US Championship, while USF2000 utilises an F4 chassis from Tatuus (the USF-17).

A schedule for the inaugural season was not immediately revealed, though the series intends to run six road course weekends with some being tripleheaders for sixteen to eighteen races total. The 2022 IndyCar calendar features twelve rounds at road courses and street circuits that the Juniors can join as undercards.

The United States Auto Club (USAC) will sanction the USF Juniors, with Johnny Unser and Joel Miller working as race directors as they already do for USF2000 and Indy Pro 2000. Gustavo Yacaman, a three-time Indy Lights race winner and sports car driver who now oversees the YACademy Winter Series for aspiring racers, will serve as series manager. 2014 Indy Lights champion and ex-IndyCar regular Gabby Chaves will be the driver coach.

“We’re enjoying an increasing number of drivers coming to USF2000 from assorted junior programmes each year, so creating this new platform will only pay dividends when it comes to properly training the young racers who want to move into the Road to Indy,” commented Road to Indy series development director Rob Howden. “The USF Juniors programme will immerse these young drivers in our culture and our approach to training and race direction. I believe that this will only serve to further increase the quality of the competition in USF2000 and Indy Pro 2000 in the coming years. The drivers will learn the Road to Indy approach and atmosphere, which I believe sets us apart from other programmes.”