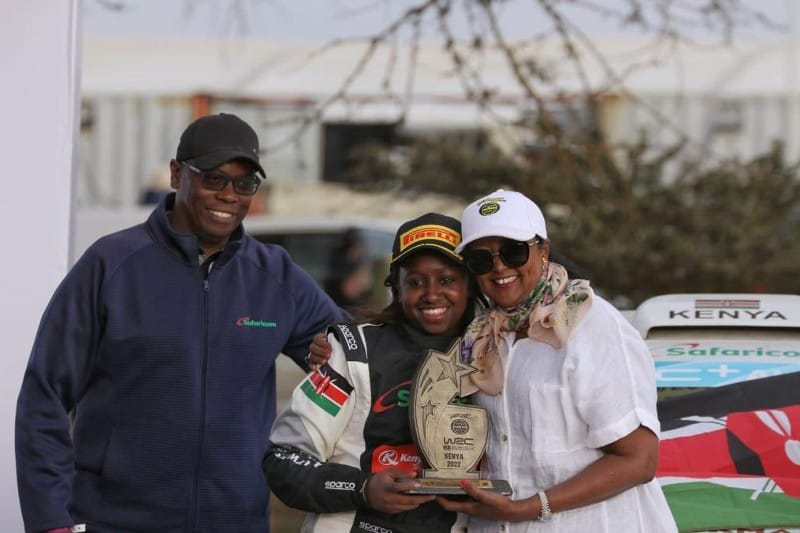 Maxine Wahome made history this past weekend as she became the first woman to win a World Rally Championship-3 event, topping the class and finishing sixteenth overall in the Safari Rally Kenya. She is also the first female WRC support category winner since Isolde Holderied won the San Remo Rally‘s Group N division in 1994.

Driver of the #34 Ford Fiesta Rally3, she completed the rally with a total time of 5:20:21.6, good for sixteenth in the overall classification with a twenty-six-second advantage over fellow Kenyans Jeremy Wahome (no relation) and McRae Kimathi. Her time was also twenty seconds behind World Rally Championship driver Gus Greensmith.

The event started on a high note when she was running second after Friday. However, her ECU failed multiple times during the next stage and required a change which forced her to continue under Super Rally rules. Despite the setback, other predicaments for the field and consistent driving enabled her to take the lead and never look back.

“My goal was just to learn the car and day by day improve my speed,” Wahome told WRC.com. “Wednesday was my first time in the car. I normally drive a Subaru Impreza N12. The only testing I got with the car was on tarmac, which is completely different to the Safari.

“The mission today was to make it through the stages slow and steady to get it to the finish and learn more about the car.”

She was greeted at the finish by Kenyan President Uhuru Kenyatta, who gave his commendations and proclaimed, “You have proved that the world of motorsport is not the world of men but mankind.

“We congratulate you as the WRC category 3 and promise you our continued support as you work your up the ranks not just in the Safari Rally but through the WRC ranks globally. We shall stand with you, keep up the spirit and the encouragement.”

A former motocross racer, Wahome mainly competes in the African Rally Championship and won the inaugural all-women Lioness Rally in 2022.

Joona wins WRC3 in Finland with a comfortable lead

By Pontus Lindroos
1 Mins read
By winning the home round of the WRC3 class, Lauri Joona has now moved up the championship standing with only 1 point short of snatching the lead from Sami Pajari
FIA World Rally ChampionshipJunior WRCWRC2WRC3

By Pontus Lindroos
4 Mins read
Kalle Rovanperä claimed a remarkable win in Rally Croatia on the power stage despite having selected the wrong tires on doing it meanwhile Yohan Rossel had a dominant win in WRC2, Zoltan Laszlo a well deserved win in WRC3 and Lauri Joona was handed the win in JWRC as Robert Virves picked up a four minute penalty on an early check-in
FIA World Rally ChampionshipJunior WRCOff RoadWRC2WRC3