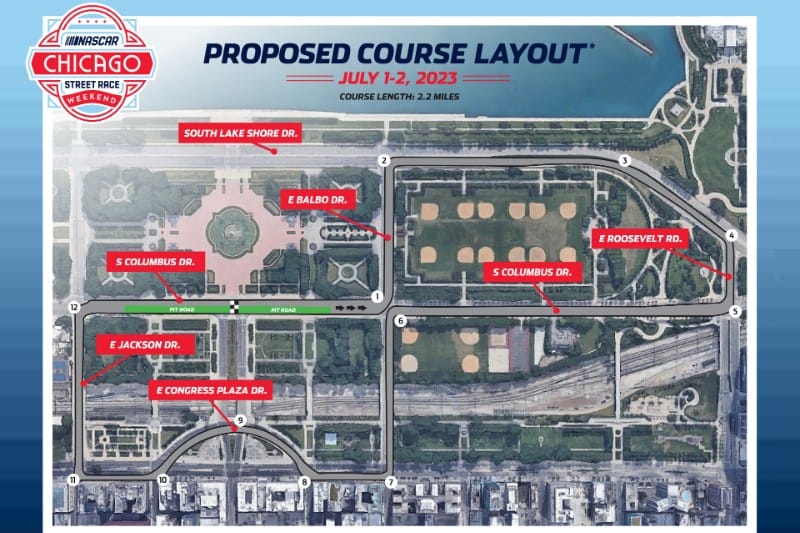 The NASCAR Cup Series is racing on a street circuit. Yes, for real.

The idea was conceived in 2021 as NASCAR—led by Kennedy—sought new ways to reach bigger audiences without investing resources into gambling on building permanent tracks. This campaign notably led to the Busch Light Clash taking place inside the Los Angeles Memorial Coliseum in February, while a street course was entertained between NASCAR and the City of Chicago. The Chicago area lost its Chicagoland Speedway race dates to COVID-19 in 2020 before being removed altogether the following year; the street circuit is the third track in the region to host a Cup race, with Soldier Field in 1956 being the first.

“Like the Busch Light Clash at the Coliseum, we seized an incredible opportunity to add an unprecedented element to our schedule and take center stage in the heart of another major metropolitan market,” Kennedy stated. “This is the ideal setting for the first-ever NASCAR Cup Series street race. The NASCAR Cup Series Next Gen cars and the IMSA machines will race along the shores of Lake Michigan in downtown Chicago, marking a truly historic moment for our sport. We are very appreciative of Mayor Lori Lightfoot and her team, along with the entire City of Chicago for working with us to make this concept a reality.”

To “test” the idea, NASCAR and the city created a street course in iRacing that served as the final race for the eNASCAR iRacing Pro Invitational Series, which James Davison won. The real life layout is identical to its iRacing counterpart, being a twelve-turn, 2.2-mile (3.54 km) track that runs along Lake Shore Drive, Michigan Avenue, and Columbus Drive and through Grand Park near Soldier Field.

“Chicago’s streets are as iconic as our skyline and our reputation as a world class sports city is indisputable,” commented Lightfoot. “I am thrilled to welcome our partners at NASCAR to Chicago for an event that will attract thousands of people to our city. Chicago’s world class entertainment and hospitality industries, coupled with our city’s history as a conduit for sports talent, make us the perfect hosts for this unique event.”

Stock cars and street racing might not sound like a winning combination; after all, bulky vehicles typically do not seem to be capable of navigating tight tracks, especially those on streets where even open-wheel racing usually does not produce as much action compared to their permanent road course counterparts. However, Chicago would not be the first time such an experiment happened. In 1986 and 1987, the now-ARCA Menards Series West held street races in Washington at Tacoma and Spokane, respectively, while the national ARCA Menards Series supported the Des Moines Grand Prix Trans-Am weekend in 1994. The Los Angeles Memorial Coliseum, which currently hosts the Cup Series’ Busch Light Clash, had its parking lot and surrounding area converted into a race track for the now defunct NASCAR Southwest Tour from 1998 to 2000. Currently, NASCAR’s only street races are in the Canadian Pinty’s Series which runs Honda Indy Toronto and Circuit Trois-Rivières, and it previously raced on an airport track at Edmonton Indy.

“Welcoming yet another NASCAR event to Illinois just weeks after the inaugural Enjoy Illinois 300 Cup Series race (at Gateway) is a testament to the strength of our tourism industry from Chicago to Metro East,” added Illinois Governor J.B. Pritzker, who did not attend the announcement after testing positive for COVID-19. “Illinois, with its longstanding tradition of innovation, is a fitting host for NASCAR’s first-ever street race, and we are thrilled to welcome this new series to America’s most iconic drive next summer.”

IMSA will also join the weekend by racing on 1 July, though it was not immediately revealed which series.

By Justin Nguyen
2 Mins read
Bubba Wallace will remain with 23XI Racing for the 2023 NASCAR Cup season and beyond as he signs a multi-year contract extension.
NASCAR Cup Series

By Justin Nguyen
1 Mins read
One doesn’t need to be a neuroscientist to understand the health effects of concussions, and difficulties with simulator testing proved this for Kurt Busch. He will miss Richmond, his 4th straight no-show.