Solberg Tops Leaderboard After Thrilling Day 1 At The Magic Weekend 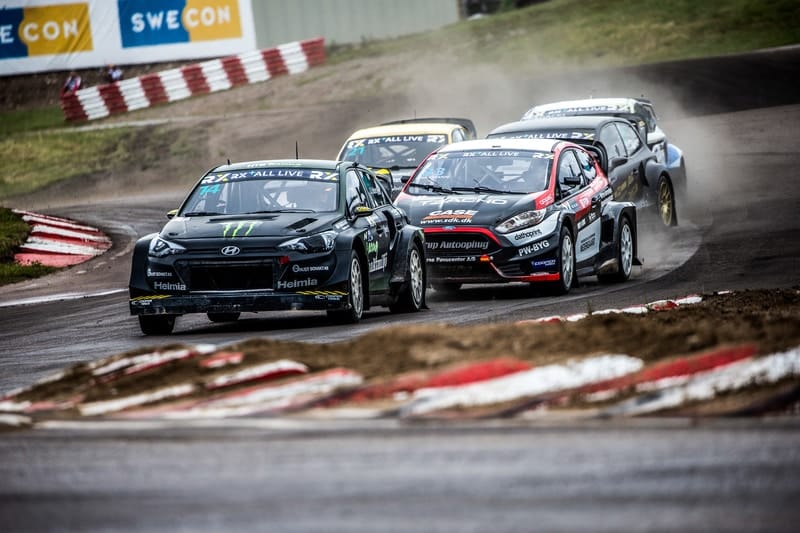 Oliver Solberg delivered a spectacular couple of heats to end the first day of the second round of the FIA European Rallycross Championship as Top Qualifier. Despite the changeable conditions, the 20-year old outshone his rivals, ending the day 2 points clear of championship leader Anton Marklund.

The ‘Magic Weekend’ in Höljes got off to a rather damp start. The rain poured just before the start of heat one, leading to decidedly slippery conditions for the opening race of the weekend. Race one delivered what fans had been hoping for – a showdown between Andreas Bakkerud and Johan Kristoffersson, two titans of World RX who have been seduced back to Höljes by the lure of the Magic Weekend. Bakkerud made good on his promise to give the four-time world champion “a run for his money” as he barged his way through at the Velodrome on lap three before taking the race win.

However, as the track developed, it was clear that that time would not be enough to win the heat. A pretty much perfect run from Solberg in his Hedströms Motorsport Hyundai i20 gave him a time which was a full nine seconds faster than Kristoffersson, just enough to fend off the attack from a charging Anton Marklund, who demonstrated perfect joker technique in his battle against JB Dubourg to win his race.

With the sun shining down on a fully dry track, the crowds could feel the magic of Höljes as Heat Two got underway. Local hero Linus Östlund set the pace, winning his race after a thrilling battle with Norway’s Ole Christian Veiby, and setting the fastest time of the day in the process. However, this was not to last.

In the second race of Heat Two, the GOAT came out to win. Four-time world champion Johan Kristoffersson did what has become his trademark move. He launched his Volkswagen Polo off the line, threw the car around the outside. made sure he came out of the first corner in the lead, and then proceeded to stay there until the end of the race. Kristoffersson finished his race a full eight seconds faster than Östlund. It is clear that the champion is here to win.

The final race of the day saw another titanic battle, this time between Marklund, Bakkerud, Solberg, Janis Baumanis, and Sondre Evjen. After finding himself in traffic, Solberg dived into the Joker Lap on lap two, freeing himself to chase down Marklund who had stormed into an early lead. Demonstrating typical Solberg flare and disregard for personal safety, he pulled off a stunning move down the inside of Evjen as they screamed down the hill at over 100mph. Unfortunately for Solberg, Marklund had enough laps in the bag to be able to hold on for the win, finishing the heat second behind the unstoppable force that is Johan Kristoffersson.

With a heat win and 3rd place in the bag, Solberg tops the overnight standings, with the very consistent Marklund in second, followed by Kristoffersson. It is very tight at the top with just five points separating the top three. It seems that the Magic Weekend certainly has more tricks in store before the weekend is out.

Star-Studded Line Up For Euro RX Opener In Hungary