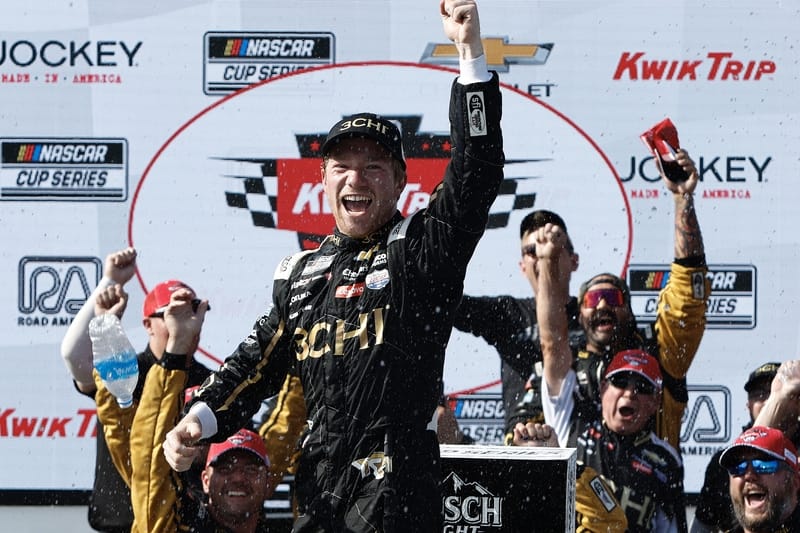 All three NASCAR Cup Series road course races so far in 2022 have seen a driver score their maiden top series win. In Road America‘s case, that honour belongs to Tyler Reddick whose long overdue first victory came after beating Chase Elliott for the lead on the final cycle of pit stops halfway through the last stage.

Reddick is the forty-first driver to win a race in all three NASCAR national series—Cup, Xfinity, Truck—and the nineteenth to have his first Cup win come on a road course. Fellow Chevrolet drivers Ross Chastain and Daniel Suárez respectively claimed their first triumphs at Circuit of the Americas and Sonoma earlier in the year. Although the win is his first on a road course and he is typically not regarded as one of the best drivers on such tracks, Reddick admitted he believed “that’s where the first one would come. I thought last year it would come here.”

“You look back over the history of time and ten years ago, you would say road course ringers come in here like A.J. (Allmendinger), like Marcos Ambrose, Juan Pablo Montoya, they come in here and just make us look like fools. I think that’s because as drivers when we only had two of these races a year, we weren’t really maximising, we’s just kind of get to the road courses, kind of like I was a couple years ago, ‘Oh, we’ll get through it.’

“You still see it to a point. A lot of the drivers have really done a great job of really figuring out road course racing and maximising the whole lap and figuring out the braking zones, what they need in their car. But still to a degree, when you see a guy like Daniel go out there and win at Sonoma, you can still just find a whole new level, if you will, in your car and as a driver. If you’re on it one day, you’re just going to be on it that day. Seeing him go out and win Sonoma the way he did, it wasn’t surprising because I know that he’s capable of that. That team is capable of that. But over the last couple years, the drivers, the teams have really been honing in on it, but you still see days where someone just hits it, hits it really good, doesn’t make the mistakes, executes their strategy and they win.”

The win ends a long, three-year and ninety-two-start wait for the 26-year-old, who recently confirmed he will return to Richard Childress Racing‘s #8 for the 2023 season but has been a hot topic on the free agent market. He is the first RCR driver to win a Cup road race since Kevin Harvick at Watkins Glen in 2006, and the #8 last visited Victory Lane that year as a Dale Earnhardt, Inc. entry driven by Dale Earnhardt Jr. at Richmond.

Elliott, the active series leader in road course wins and 2021 Road America Cup champion, was the obvious favourite as he started from the pole and led thirty-six of sixty-two laps. However, the win got away when Reddick beat him off pit road and held him off for the remaining twenty laps. Despite Reddick’s team-mate Austin Dillon suffering a flat tyre late, NASCAR elected not to wave the caution and allow the race to finish under green, sealing Elliott’s fate of a runner-up finish.

“It was super difficult to get to somebody to pass them,” said Elliott. “It was impressive he was able to get up there and capitalise on my mistakes. Happy for those guys. Appreciate the effort out of our team. Wish I could have done a better job there. I felt like we probably needed a little bit, but I think we were good enough to win, so those always hurt.”

No natural cautions (for on-track incidents) occurred for the first time in 2022.

By Justin Nguyen
3 Mins read
A 65-race winless streak seems to have ignited a fire within Kevin Harvick as he has now won the last two NASCAR Cup Series races in a row.
NASCAR Cup Series

By Justin Nguyen
2 Mins read
Bubba Wallace will remain with 23XI Racing for the 2023 NASCAR Cup season and beyond as he signs a multi-year contract extension.