After scoring points in every single weekend of racing Andrea Bertolini and Michael Bartels kept up Vitaphone Racing's impressive form in FIA sanctioned GT racing, winning the drivers' title in the new FIA GT World Championship and helping the squad to the teams' title.

It is the fourth such championship win for the driving duo, who also combined to the title in 2006, 2008 and 2009. However, Bartels – whose company also runs the team – is quick to lift this year's triumph above previous seasons'.

“This championship isn’t comparable to past ones,” he said. “We’ve won it in the new World Championship, and the contenders were top-notch teams and drivers. It wasn’t easy but we did it! Right now I still cannot fathom the importance of this success.”

Both titles were sealed in the Qualifying Race of the final race of the season at San Luis, Argentina. Though both Vitaphone cars failed to score a point – the sister car pedalled by Enrique Bernoldi and Miguel Ramos – the failure of their nearest rivals, Young Driver AMR, to score resulted in Vitaphone enjoying an unassailable lead even before the season finale Championship Race. 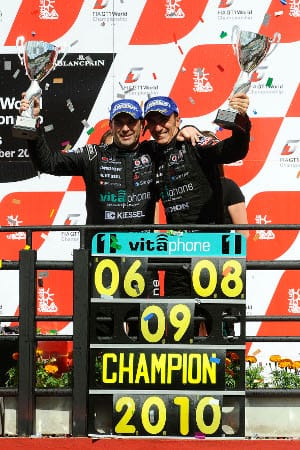 hen finished seventh in that final race to claim another six points and protect their 100% scoring record over the ten round season.

“In the last two races we carefully controlled our advantage, trying to avoid mistakes,” Bartels explained. “We were able to remain focused during the entire season, trying to accumulate the greatest amount of points possible while taking full advantage of opportunities as they arose. Perhaps we made less mistakes than our adversaries. Andrea and I know each other very well: this is an enormous advantage for us”.

“We’ve just accomplished an incredible thing: we’ve won the fourth international title! They say that the first time is never forgotten, but I have to admit that today, the latest one, is surely wonderful, really exciting. It’s not easy to win the first time, and repeating the feat is even harder,” said Bertolini.

“The key to this success is having a reliable car, a fast team-mate like Michael Bartels – who I consider a brother– and a team that is as motivated as I am. We were fast even when we were loaded with ballast; we attacked at the right time and we were good at avoiding difficult situations. This is what I call determination! Everyone deserves credit for it. I’m only sorry that we couldn’t get Maserati a car maker’s title. I dedicate this world championship to my wife, my son and to all those who have given me a helping hand.”

A perfect season, however, was denied the Trident cars, as a first and third place for the French Hexis AMR in the Championship Race squad clinched the SRO Trophy for Manufacturers in favour of Aston Martin.