Flying Lizard Motorsports beat off the competition from Roles Series regulars and Rolex 24 at Daytona favourites to claim the pole position for the 49th running of the Daytona 24 Hours.

The team are regulars in GT competition – in Grand-Am and ALMS races and the Le Mans 24 Hours – but this weekend's race is their first experience of Daytona Prototype competition – the premier series in Grand-Am.

With just five minutes remaining of the 15 minutes DP Qualifying session it was Porsche works driver Joerg Bergmeister who pedalled the teams Porsche-Riley around the track in a time of 1:40.099. It marks another accolade for the chassis, which is the same car that won the 2009 race with Brumos Racing. Bergmeister shares the no.45 car with alumni of Flying Lizard GT campaigns – Patrick Long, Seth Neiman and Johannes van Overbeek.

“I was ready to come in, and the team told me to try again,” Bergmeister said. “I went for it. I risked everything, and it worked out perfectly. I knew we have a great car and a great engine, but I was really surprised to win the pole – with the team running the DP for the first time. I was hoping to qualify in the top five.”

“I had some good laps at the beginning of the session and I think that Max was on provisional pole and they told me I was like nine-hundredths behind,” he added. “I was about to come in and they told me, okay, try again and I went for it and didn't really car too much what happened to the car.”

Flying Lizard will be joined on the front row by another of the Rolex 24 underdogs SunTrust Racing's Max Angelelli followed up on his unofficial lap record smashing run in practice, running a fraction of a second slower (1:40.133) in the team's Chevrolet-Dallara. In total six drivers beat the track record for the class that was set by David Donahue in 2009.

The session was phenomenally close – the first eleven cars separated by less than a second.

The no.01 Chip Ganassi Racing with Felix Sabates car will line up on the second row, alongside the no.8 Starworks Motorsport car of Ryan Dalziel. He shares the car with Jim Lowe, Mike Forest, Tomas Enge and Colin Braun. The second Ganassi car – driven by men from the squad's NASCAR and Indycar stables will start fifth, Kiwi Scott Dixon completed the session for the team.

United Autosports' entry with Michael Shank Racing will start ninth – accomplishing the first of driver Martin Brundle's pre-race aims by qualifying inside the top ten. Brian Frisselle put the Doran Racing entry – the team that includes Sunoco Challenge winner Ross Kaiser – an impressive seventh, another of the smaller teams to punch above their weight in the session.

More disappointing were Action Express Racing. The team that won the race last year have entered two cars with a start studded driver squad – including two of last year's winning drivers, and three of the 2009 victors – but could only muster 12th and 13th fastest. Level 5 Motorsports – also entering two cars – took what driver Ryan Hunder-Reay called a “strategic decision” not to qualify and will start at the rear of the 49 car field on Saturday.

The GT class – which ran their own separate 15 minute session – ended dominated by TRG. 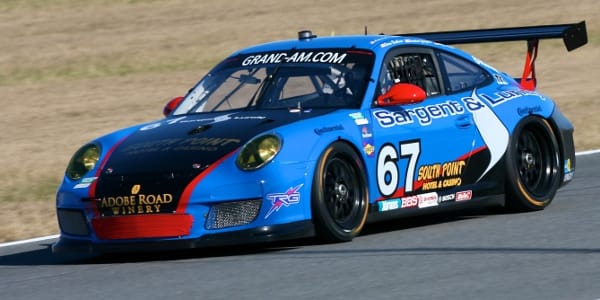 Andy Lally looked to have taken pole in the GT class, but the no.67 failed technical checks

The team's Porsche GT3s locked out the front row, Andy Lally beating Dominik Farnbacher by nearly three tenths of a second. Six of the first seven places in the class were taken by Porsche running teams. The only interloper was Autohaus Motorsports' Camaro GT.R which will start third in class.

The Mazda teams – those expected most likely to challenge Porsche for the class win – found themselves not just behind the Stuttgart cars, but also most of the BMWs and Camaros in the class. The lead RX-8 – the no.42 of Team Sahlen 1.5 seconds behind Lally's 1:48.487 lap.

However, Lally’s no.67 car fell foul of the post session technical checks, the rear wing on his Porsche found to be mounted too far back. Farnbacher thus takes the class pole in the no.66 entry.

Teams have three further practices sessions to further hone their cars before the Rolex 24 at Daytona starts a 3:30pm (local time) on Saturday.